A ‘Detainee of All Eras': The Prominent Case of Egyptian Activist Alaa Abdelfattah 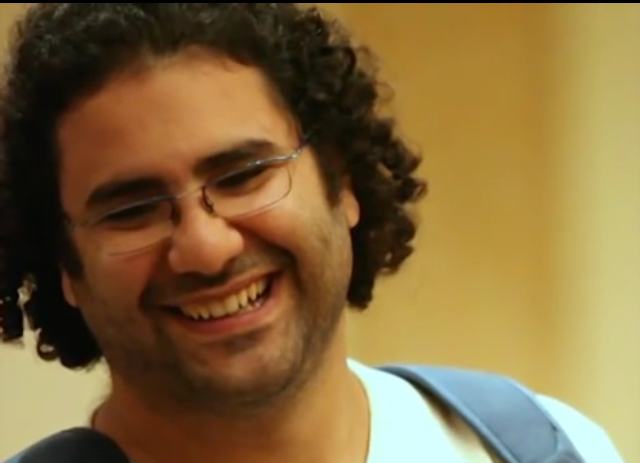 Egypt's wide-scale systematic arrests of political dissidents have allowed for full government control over a country of more than 100 million citizens.

Orchestrated by Egyptian President Abdelfattah El Sisi, the imprisonment of opposition bloggers and political activists has become daily news, turning justice into a political arena pitting opponents against the regime.

The case of Egyptian tech-savvy and political activist Alaa Abdelfattah has recently stirred an outrage because Abdelfattah has been imprisoned since 2013 and yet he now faces new charges that could lead to more prison time.

In early November 2017, Egypt's Court of Cassation confirmed Abdelfattah's jail sentence ordering him to serve five years in prison for flouting Egypt's protest law in November 2013, Reuters reported. Abdelfattah will also be forced to pay a fine of EGP 100,000 ($5,667 USD).

Prosecutors said Abdelfattah was guilty for organizing the protest by promoting it on social media platforms. Rights groups criticized the government for prosecuting Alaa by invoking a century old law although they allegedly say he did not attend the protest.

But contrary to this narrative, Abdelfattah’s sister, Mona Seif told Global Voices that her brother did, in fact, join the protest.

“He was just late by the time he arrived. It was already getting violently dispersed and that’s why many people assume he wasn’t there, and I keep on trying to set the record right,” Mona said. She further asserted that Alaa was not involved in protest organization – “that was me and my colleagues in ‘NoMilTrials’ group and we officially said so to the prosecutor and judge.”

As Abelfattah's sentence nears completion with only 18 months left for penalties, the Egyptian popular activist still faces another prison term for allegedly insulting the judiciary.

The court's decision to uphold the verdict paired with the likelihood that the pro-democracy activist may face more years in prison have stirred discontent among activists and the broader international human rights community.

In September 2017, Amnesty International called on the Egyptian authorities to drop all charges against Abdelfattah and other defendants convicted of criticizing the government's judicial system.

Instead of punishing Alaa Abdel Fattah and the 23 other defendants for expressing their opinions, the authorities should drop the charges and immediately and unconditionally release them.

his trial is an attempt to silence criticism of a judiciary that has itself become a source of human rights violations. ‘Insulting’ public institutions or officials is not a criminal offence under international law, and no one should stand trial – let alone face imprisonment – for peacefully exercising their right to freedom of expression

An excerpt of this statements reads:

Amnesty International’s research has identified serious due process shortcomings in Egypt’s judiciary. The criminal justice system has handed down mass death sentences and lengthy prison terms to thousands of human rights defenders, activists, lawyers and journalists following grossly unfair trials, while security forces responsible for grave human rights violations enjoy near total impunity. The organization has also found the Public Prosecutor’s office to be complicit in violations by turning a blind eye to enforced disappearance, torture and other ill-treatment.

A ‘detainee of all eras’

The prominence of Alaa Abdelfattah stems from his involvement in Egypt's political activism dating back to the national uprising of the January 25 revolution, an 18-day series of mass protests that took place in 2011 and ended with sweeping the 30-year-old regime of then-president Hosni Mubarak.

Known as the “Detainee of All Eras,” Abdelfattah has the unfortunate distinction of having been arrested under each of the four iterations of power in Egypt, beginning with Mubarak through Sisi's autocratic rule.

In 2006 Abdelfattah was captured for “participating in demonstrations calling for an independent judiciary.”

Under the interim rule of Egypt's Supreme Council of Armed Forces (SCAF), Abdelfattah was detained in late 2011 on charges of weaponry stealth, enticing violence against armed forces, and attacking military personnel during the infamous Maspero incident.

When the former Muslim Brotherhood-affiliated President Mohammed Morsi was elected in 2012, Abdelfattah was arrested just a year later in March 2013 over convictions of blasphemy and insulting Morsi, according to Daily News Egypt.

After Morsi was overthrown in 2013, Abdelfattah opposed the relentless crackdown on dissidents and protested laws launched during the rule of President El Sisi, landing Abdelfattah in Mazraa Torah Prison to serve his sentence.

Although the number of occasions Abdelfattah was arrested remains obscure, his online presence and political activism made him a dangerous figure in the eyes of Egypt's authorities.

Social media allowed government surveillance systems to plot against dissidents such as Abdelfattah. Yet, these same channels have also been used to demand his release. The international human rights community and social media activists have taken to social media platforms to reject the imprisonment of Abdelfattah, calling upon Egyptian authorities for his immediate release.

Journalist Dima Khatib shared a video on Abdelfattah's punishment by Al Jazeera Plus and tweeted:

Alaa Abdelfattah, an Egyptian detainee and one of the icons of the figures of the Egyptian revolution, Do you remember it? #FreeAlaa

#Free_Alaa_Abdelfattah Free the champion, who is unjustly spending the best days of his life in prison. Freedom for the dream

Today Alaa Turns 36 years old. Four years ago, ever since he had been jailed, time stopped for him. In reality, time stopped for him as he returned from South Africa six years ago to take part in the revolution with millions of fellow Egyptians. Since then, Alaa has been surviving between police stations, morgues, and prosecution offices. Alaa has always been, and will always be, an icon for an oppressed generation. Happy Birthday, and may God bring us together.