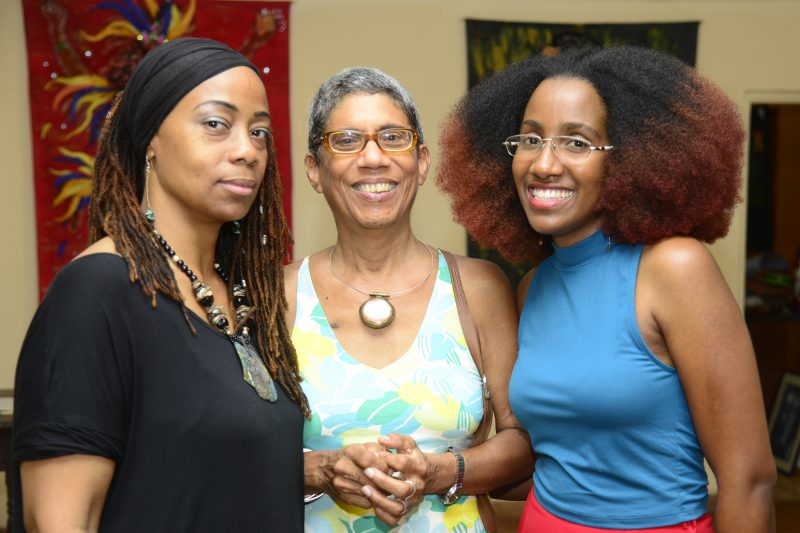 (Left to right): Artists Miriam Hinds-Smith, Margaret Stanley and Katrina Coombs at the opening of their exhibition “3 Generations of Textiles and Fiber Arts” at the Grosvenor Galleries, Kingston, Jamaica on June 24, 2017. Photo by Andrew P. Smith, used with permission.

An unusual exhibition took place recently at Kingston's Grosvenor Galleries: “3 Generations of Textiles and Fiber Arts” brought together Kingston-based artists Margaret Stanley, Katrina Coombs and Miriam Hinds-Smith for a vibrant expression of their personal aspirations and perspectives of society.

Stanley, 66, holds a degree in Fashion/Textiles from the Ravensbourne College of Art in London, England. She lectured at Jamaica's prestigious Edna Manley College for the Visual and Performing Arts (EMCVPA) from 1989-2017 and has exhibited widely in both the United Kingdom (UK) and Jamaica. Kingston-born Coombs, 31, was educated in Textile and Fiber Art and Curatorial Studies at the EMCVPA. She also holds a Master of Fine Arts (MFA) in Creative Practice from the University of Plymouth in the UK, via New York's Transart Institute. She has exhibited widely since 2008 and was featured in the Young Talent 2015 exhibit at the National Gallery of Jamaica. Hinds-Smith, 48, was also educated at EMCVPA and received her MFA degree from the Winchester School of Art at the UK's University of Southampton.

Global Voices asked the three artists about the development of their individual work, feelings about each others’ art and views on a recent nationwide controversy related to a “tablecloth.”

Global Voices (GV): Congratulations on a great exhibition! What moved you to take up textile art? Was it a process? Did you start out in textiles or in other art forms? 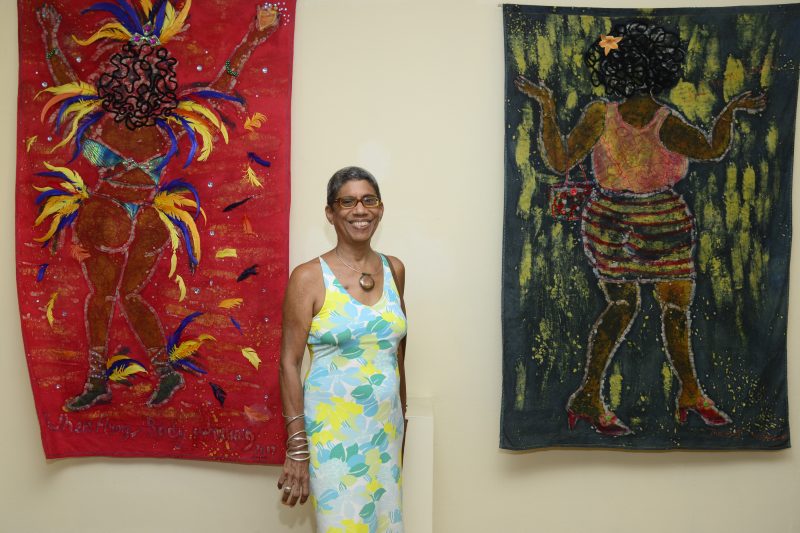 Margaret Stanley (MS): I originally wanted to be a fashion designer. My chosen course at college in the UK also offered textiles. I focused on making hand printed textiles for my fashion graduation show. Then I worked briefly in the fashion industry, but soon realised I wanted to make textiles. I did not know much about Textile ‘Art’, but fell into making large appliqué pictures, which over the years just developed into the work I do now.

Katrina Coombs (KC): I first started textiles and fiber art in high school, when I was introduced to macramé. I immediately found a love for fibers, tying knots and creating pieces.

Miriam Hinds-Smith (MHS): I am from a family of tailors and seamstresses. My mother sewed for us as children, and in my formative years, I had the fancy idea that I would become a fashion designer. This peaked in high school, where I made everything for myself. But I would say it was a gradual process. My initial decision to pursue a path in the arts was from a completely different angle. I wanted to become a graphic designer. But at the School of Visual Arts I had greater exposure to other art forms. I knew I wanted to do something far more expansive. It was a kind of returning to something I was innately responding to when I really fell in love with textiles. I loved every facet of it — designing, creating, imagining. There are cathartic aspects to working with this medium. It provided me with a voice that was quite poignant, quite auditable, unscripted, ephemeral yet tangible.

GV: To what extent does your work reflect your personal outlook or situation — or do you see it as a broader reflection of society? 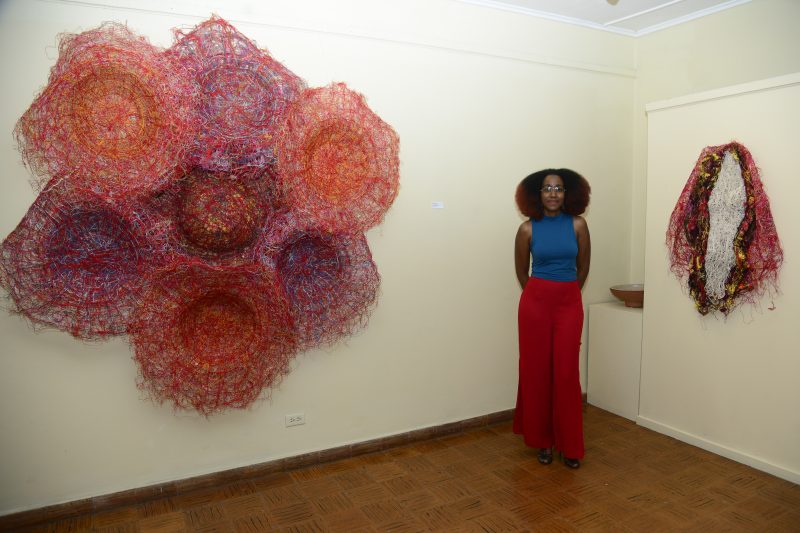 MS: My work mainly reflects my personal outlook. However, as I am part of Jamaican society, obviously it would also reflect my daily thoughts and observations.

KC: The works are generally a broader reflection of society as they deal with issues of ‘othering’ faced by all women at some point in their life. However, the first reference is the self and as such, the pieces are directly speaking to issues I have faced as a woman attempting to find my identity.

MHS: It is a mix of both, my personal references and what I know — what WE know — is happening in society. It is all in front of us. For some, it does not impact directly; it's a distant thing that you hear on the news. Truth be told, the effect is often closer to home — but we either sweep it under the rug or find ways of rationalising the situation away. Unresolved injustices are not acceptable. My work has moved from the very visceral and stridently literal. With this exhibition, I chose to focus on creating a space for healing, of sanctuaries for those to whom justice has been unrequited.

GV: How do you feel the medium of textiles enhances artistic expression? 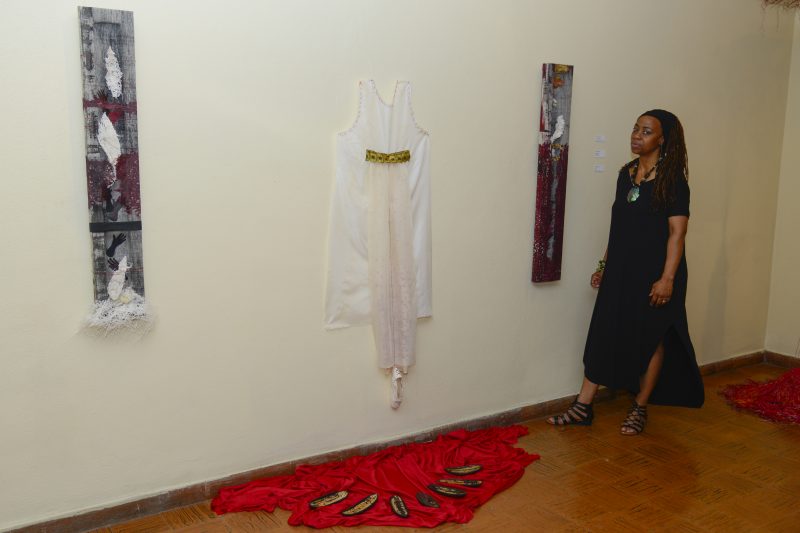 MS: Textiles are important in all our lives, from birth to death. Special garments and fabrics in all societies have historical, cultural and emotional significance. Although I use many traditional techniques in my work, mostly in non-traditional ways, the layering of fabrics of differing colours, patterns and textures is an important inspiration.

KC: Textiles and fiber are used by artists as any other medium. One must first understand the material for all its characteristics — and through that understanding, be able to express oneself artistically.

MHS: The medium of textiles is canonised by Western culture as residing in a feminine domain — a specifically feminine expressive media. This is in stark contrast to other cultures where the medium (or interactions with textiles) resides in the male domain. I find textiles a pliable and eloquently responsive medium that communicates immediately. It has many nuances that allow for a multi-layered conversation.

GV: Do you feel that textile/fiber art gets the recognition it deserves in Jamaica?

MS: Skills in traditional textile techniques like embroidery are still appreciated by the older generation. Textile Art? Not so much! However, with exposure from foreign experience and the Internet, more fine artists are using textile techniques in their work. This has led to more acceptance. The average Jamaican, however, is still more comfortable with painting!

KC: Recently, textiles and fiber have been put in the forefront of some exhibitions by some artists. This has been a slow process; however, it is beginning to get the recognition it deserves. With more artists exhibiting textile and fiber art-based works […] there will be more recognition.

MHS: Good Lord, no! I recall having a conversation with someone who considers himself an ‘art connoisseur’. He was concerned with the resale value of fiber-based art work. My preoccupation is to have works of art that speak to the issues, in places that will stir further conversations and awareness. Not the sale and ‘art as object’ scenario.

GV: How do you feel about the work of the other two artists in the exhibition? Where do you see the contrasts and similarities in your cross-generational work?

MS: I feel Katrina’s pieces work on many levels. Her concept is not necessarily what the viewer might take away. The visual experience is strong. Miriam’s work, to me, seems more cerebral and needs closer examination. Both artists use textiles, threads and fabrics in very creative ways.

KC: There are three powerful voices speaking through the works, which highlight very personal issues for all three of us. The works themselves reflect our identities as women and the different stages we are at in the process of our development — as well as our different generations. I have always admired Margaret and Miriam for the works they produce, the energies that flow through them and into their works. From being trained by them both, it was an honour being able to exhibit alongside them.

MHS: …The contextual synergy of the exhibition is interesting, considering we really had no prior discussion of theme, any concerns of the sort or any other area that would create forms of alignment. There are similarities across our work from a purely generic frame, being all textile-based. However, Katrina’s poignant fiber-based constructs are very powerful and allude to the tenuous yet robust feminine quality of her concerns. Yet, they are carefully positioned in a very contemporary context, speaking to issues that need to be confronted. I enjoy Margaret’s work, as she employs traditional techniques — but her approach is mixed, creating her unique play with these mediums. Her work is whimsical yet stoutly satirical; a reflective commentary on the every day and the celebratory nature of accepting self, our independence to change, and the cadence of our evolution as women.

GV: Lastly, what are your thoughts on the recent controversy over Jamaica's bandana fabric? (A  dancehall star recently sparked controversy when she disparagingly called the Jamaican bandana a “tablecloth.”)

MS: Bandana is just one colour combination of a traditional woven Indian Madras fabric called Cotton Madras. It has a link with colonialism but has become a symbol of the Jamaican culture. It is similarly used in other Caribbean islands. It is a wonderful, very useful fabric.

KC: This relates back to the issue of textile and fiber being recognised. Firstly, the bandana is a plaid printed cloth. It was originally woven, but due to manufacturing processes it is now easily found in print. It is labeled as our national dress; however, it is hardly ever used in any of Jamaica's ‘branding’. I think the controversy has brought some needed dialogue and recognition to the material and its values for our country.

MHS: “…My concern [is] that as an independent nation, as a signifier of our national identity, we still utilise, like all the other islands, one of the remnants of colonial domination — the ‘Madras’ cloth. It comes from Chennai which was renamed Madras by the British during the mid-19th century. Now Jamaica, an independent country celebrating 55 years of nationhood, still struggles with issues of identity and who we are as a people.

I did not hear the unfortunate ‘tablecloth’ incident first-hand [the comment was made on an Instagram post] but this singer referred to ‘not wearing a tablecloth like Miss Lou’. I don’t believe she meant to disrespect Miss Lou personally. In her own way, though, she was speaking out against the cloth forced on us as a label.

The Madras identified us as property of the colonial empire. Back then, each island was assigned a specific pattern. Now let us look at Miss Lou: an iconic stalwart, a defender of our spoken language patois, dressed in this Madras costume, reciting ‘Colonisation in Reverse’ (one of my faves!). To me, this is an ironic satire of her redefining who we are through wearing this costume. Miss Lou is saying the labeled slave now speaks with a voice that stands strong, resolute and independent — not celebrating the cloth, but what the wearer of the cloth has become.