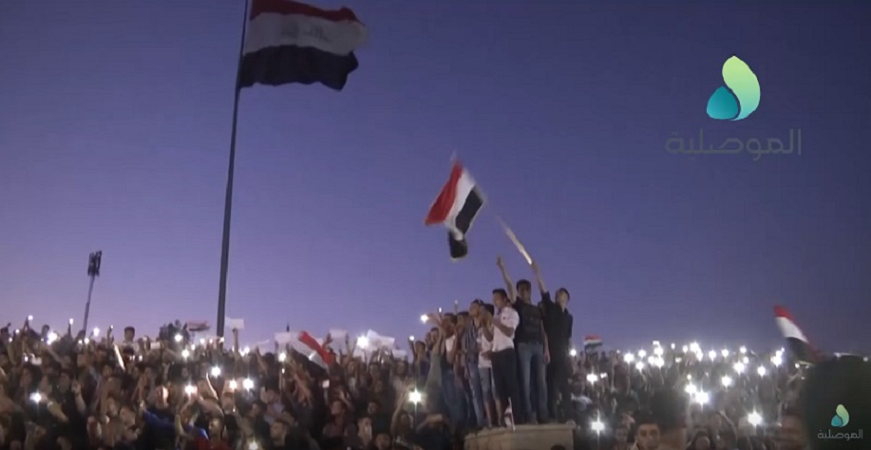 Screenshot of Iraqis from across the country visiting newly liberated Mosul to celebrate Eid. Source of screenshot from YouTube video ‘Mosul celebrates first Eid in three years with the Eid in Mosul campaign’ uploaded on June 28, 2017 by the AlMawsleya channel.

A group of around 300 Iraqis recently traveled from south and central Iraq to Mosul to celebrate the Eid al-Fitr holiday with their newly liberated compatriots.

In the summer of 2014, the militant group Islamic State (also known as ISIS, ISIL, and Daesh) drove out Iraqi security forces and seized control of Mosul, Iraq's second largest city, in a territorial sweep of much of northern Iraq.

It was in Mosul that the militant group's leader, Abu Bakr al-Baghdadi, declared an Islamic Caliphate spanning Syria and Iraq.

Since then, life for Mosul's residents has been one of fear, oppression, and hardship.

Daily life changed for the worse with the persecution of minorities, food and fuel shortages, and intimidation and harsh punishment.

An effort to retake the city by Iraqi security forces began in October 2016. After eight months of intense battle just a handful of neighborhoods remain under the group's control, prompting Iraqi Prime Minister Haidar al-Abadi to recently declare the end of the Islamic State.

The “Eid in Mosul” campaign was organized by a group of Iraqi activists led by Hamid al-Sayed, Ali al-Touki, and Mohammed al-Raji.

Originally an idea to visit old friends who had been trapped under Islamic State rule, the plan turned into a full-blown campaign after generating enormous interest on Facebook. More than 1,700 people expressed interest in joining the trip but security conditions would only allow 300.

This Eid was the first in three years in which Maslawis (people of Mosul) were able to publicly celebrate. The day was filled with events forbidden under the Islamic State, including poetry readings, theater, and live music. Mosul's visitors also brought a gift of more than 1,000 books from Baghdad as part of the “I am Iraq, I Read” campaign, an initiative promoting culture and a more educated Iraq. This gift is a start to replacing thousands of books destroyed in Mosul's libraries by the Islamic State.

The day was joyous, bringing together Iraqis to not only celebrate the holiday, but to also celebrate the liberation of Mosul. Scenes hit social media of men and women from across the country singing the national anthem and chanting “Brothers, Sunnis and Shia, this country is not for sale,” demonstrating a a feeling of unbreakable unity shared among Iraqis.

While the event was mostly organized by activists, the government stepped in to help providing transportation and security for the event.

The “freedom caravan” arriving in Mosul.

Men and women of Mosul greeted the “freedom caravan” at Mosul University.

With flowers and love, men and women of Mosul welcome visitors from across Iraq.

Members of the “I am Iraqi, I Read” initiative preparing over one thousand books to deliver to Mosul through the “freedom caravan.”

The evening concluded with a fireworks display celebrating Eid and Mosul's liberation.