Elections have been postponed three times in Lebanon since 2013. As a result, eligible voters from ages 21 to 28 have never had a chance to vote. 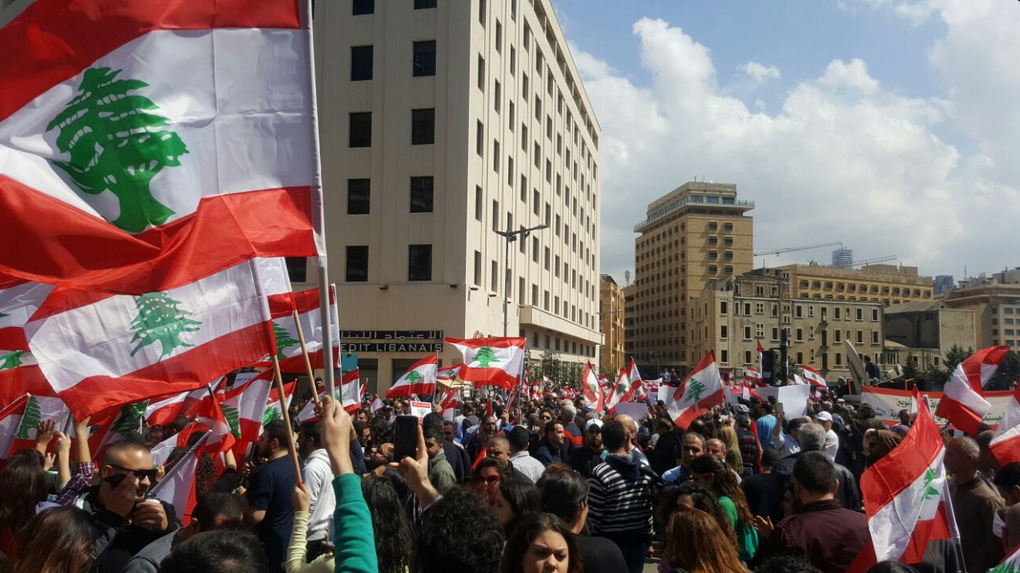 Protesters wave Lebanese national flags during a demonstration against proposed tax increase, in front of the government palace in Beirut, Lebanon. March 19, 2017. Photo by Hassan Chamoun.

Days after two thousand protesters gathered in front of the government palace in Beirut on March 19, to protest against proposed tax hikes, the Lebanon's Speaker of Parliament Nabih Berri announced that elections will be delayed, again.

Hassan Chamoun, a videographer and member of the widely successful anti-corruption ‘You Stink’ Movement, argued that the proposed tax hike is an attempt to distract the Lebanese people from the election extension. Speaking to Global Voices, he said:

Ruling politicians are bringing attention to this issue on purpose, to eclipse the parliamentary extension and political deadlock between them regarding a new electoral law.

Elections should have taken place in June of 2013, but the parliament extended its own term for 17 months citing ‘security concerns’. Then, in November of 2014, citing the need to decide on a new electoral law before voting, the parliament delayed elections to 2017. This time, the government is saying the extension is for ‘ technical reasons’, in reality the parliament has reached a deadlock on the new electoral law.

To put this in perspective, a 28 year old Lebanese citizen has yet to vote for their parliamentarian of choice despite being legally allowed to vote since they turned 21. Popular blogger Elie Fares sarcastically thanked the government or dawleh for the extension on Facebook:

I’m 27 year old, moving to Philadelphia in 2 months, and I’ve never – nor will I ever at this rate – voted for parliament. #ThanksDawleh

Ramez Dagher, a blogger at Moulahazat, said that he joined the protests because the government is imposing taxation without representation. Speaking to Global Voices, he said:

They cannot raise taxes without giving the people the right to have a say about it. It is pure hypocrisy especially since they are leading the country towards a third cancelled parliamentary election. Lebanese politicians made us live in garbage for a year in a half, deprived us from electricity for decades, breathe corruption, and now want to raise taxes that will eventually feed that corruption in a way or another. Enough is enough.

The government is arguing that increased taxes are needed to finance the salaries of public sectors employees. Both Dagher and Chamoun agree that Prime Minister Saad Hariri appeal to protesters on Twitter was a publicity stunt and a strategic step meant to distract the public.

I ask the organizers of the protesters to form a committee to raise their demands and discuss them positively.

His tweet followed his appearance, surrounded by security forces, at the protest, seemingly attempting to talk to to protesters, who greeted him with chants of ‘thief!’ and throws of water bottles.

Dagher said that this made him “look as cool, friendly and caring” and “indirectly threw the responsibility from the government to the opposition, while also giving something for the protesting groups (who have nothing in common) to argue about: whether to negotiate with the PM or not”. Chamoun said that Hariri “wanted to look like the victim.” 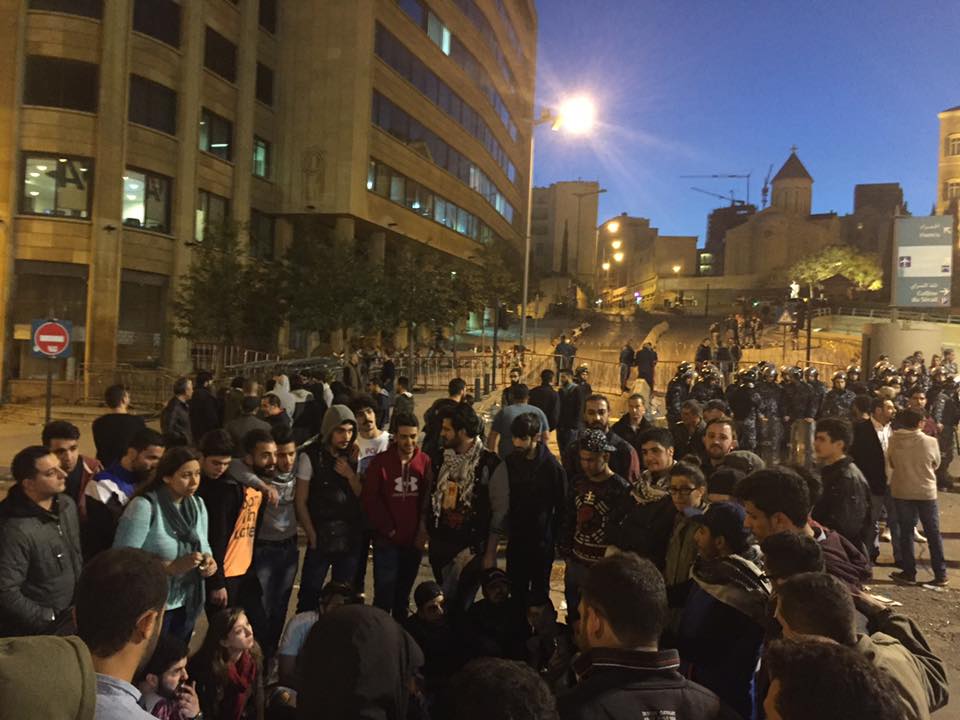 GV contributor Zeina Nasser, who has been involved in the protests as both a journalist and an activist, points out that protesters’ demands are already very clear:

Personally, I think that our demands are clear enough, and were announced in the protests. There is no need for a committee and we know that this takes a lot of time in Lebanon. We're with raising employees’ salaries but not from the pockets of other Lebanese citizens who can barely make a living. We're with finding new ways for financing that such as a tax raise on maritime public property or projects that cost millions of dollars.

The tax hike is a smokescreen

Marina Chamma, a writer, activist, and blogger at ‘Eye on the East‘ argued that a tax increase isn't justified because the government refuses to tackle existing problems:

If only tax evasion, public financial waste, and corruption in the public sector are fought, this alone could finance the salary scale and much more. Instead, the government prefers to increase indirect taxes (such as VAT) and taxes that affect the average citizen (e.g. on interest on deposits), instead of undertaking a major overhaul of the taxation system (e.g. increasing direct tax such as income tax to make it truly progressive) or taxing such sectors as the banking sector that are considerably under-taxed.

While the government is willing to increase taxes on those already struggling, it is unwilling to tax the very wealthy. An example of that, as MTV Lebanon explained, is the government's attitude to wealthy yacht owners:

Believe it or not, yachts that are larger than 15 meters are exempted from customs and not a single penny enters the treasury of the state through them. Furthermore, a foreign national owning a yacht, in addition to not paying custom duties, unlike Lebanese owners, does not pay the Value Added Tax (VAT), which prompted many Lebanese owners to use several tricks by registering their yachts as foreign to evade paying the VAT.

But activists have more obstacles ahead of them. Not only do they have to find a way to maintain the momentum and fight against ‘protest fatigue’, but some are finding difficulties including more sections of society to make the protests more inclusive. Nasser is among those trying to organize the movement from the bottom up. She explains that there is a need to include disenfranchised groups in Lebanon such as the illiterate, the poor and migrant workers.

We are less hopeful every time a protest ends. I think that a sit-in is a must since it cause more pressure on the government.