With Tambourines in Hand and Led by Survivors, a Powerful Movement Against Sexual Violence in Jamaica Rises 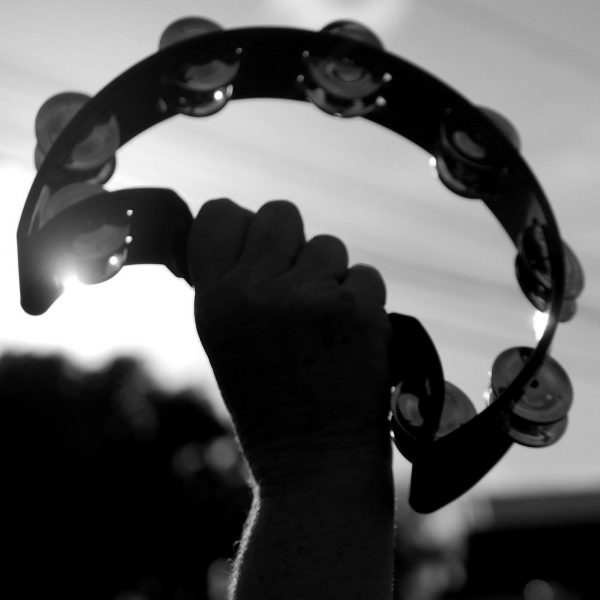 A tambourine held aloft at the Tambourine Army's March 11, 2017 protest against sexual violence in Kingston, Jamaica. Photo by Storm Saulter, used with permission.

One of the founders of Jamaica's Tambourine Army, a bold new movement led by women and survivors of sexual abuse and violence, was arrested and charged on three counts of “the use of computer for malicious communication”.

Latoya Nugent was charged under the country's cybercrime legislation, after several men lodged formal complaints with the police accusing her of identifying some of them as sexual predators on social media. Nugent is currently out on bail.

Her arrest comes as her Tambourine Army movement has garnered much attention and stimulated debate in the Caribbean. Particularly, some in Jamaica are questioning the group's rage and tactic of naming and shaming abusive men, many of whom are in positions of power; the tactic got Nugent arrested.

What fuels the rage

Current national legislation in Jamaica fails to address the complexities and realities of sexual violence against women and children. For example, the Sexual Offences Act narrowly defines rape as ‘non-consensual penile penetration of a woman’s vagina by a man’. Rape and abuse are also massively underreported in the country because of a culture of victim-shaming and stigma.

All of these conditions led to the spontaneous creation of the Tambourine Army earlier this year. The Army came together after Nugent started the hashtag #TambourineArmy, in response to the attention she garnered on social media for bonking a pastor accused of sexual assault with a tambourine at a protest. With the hashtag, Nugent tried to channel focus of the incident to something bigger:

What we are trying to do is to engage persons who do healing work, and counselling and support kind of work, to provide safe spaces, physical and virtual, for survivors of sexual violence. We are also trying to let people understand the concept of sexual grooming.

The pastor, Dr. Paul Gardner, was soon charged with the sexual abuse of minors.

While Gardner faces trial and his church is facing a backlash, Nugent's online movement brought out 700 women, men and children to march in the capital city Kingston on March 11, 2017. They carried tambourines to break the silence against the stigma survivors face and to demand justice against sexual abuse and rape. 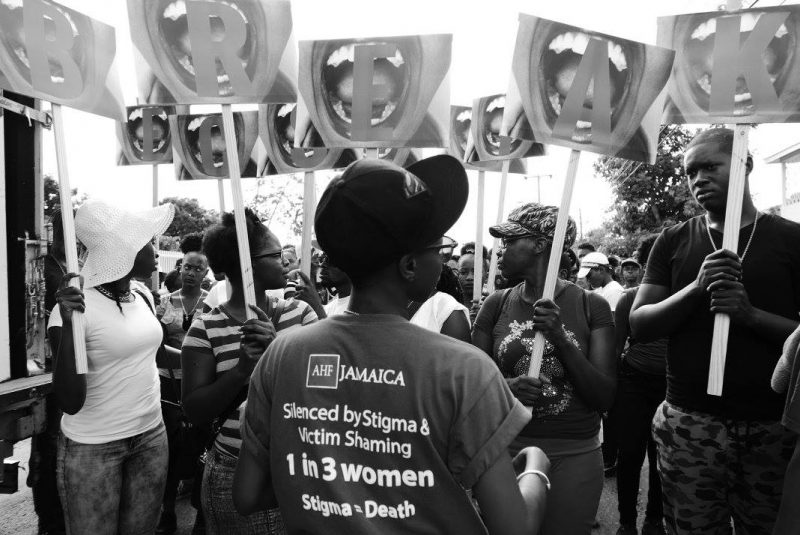 Survivors of sexual abuse and gender violence in Jamaica are no longer prepared to stay silent. Photo of participants in the Tambourine Army's march by Storm Saulter, used with permission.

The rift created over the Army's tactics escalated when Emma Lewis, a Global Voices contributor who had written about the group's formation and mission, subsequently wrote an opinion piece on her personal blog that hit a nerve and got the discussion going on a deeper — and at times acrimonious — level.

Lewis, a survivor herself, noted in her post that she “was also a ‘radical'” and still is when it comes to her views “on the environment, capital punishment, human rights, abortion rights, LGBT rights”. She maintained, however, that she doesn't believe in violence because “it solves nothing”.

Lewis’ post was not well received by some and it unleashed a series of vicious online comments.

According to Jamaican author Kei Miller, Lewis might not understand that the Tambourine Army's rage is called for; that perhaps, Lewis’ position of “supposedly unacknowledged White Privilege” blinds her to the heat of the issue. On his blog, Miller further explained:

Many who read Emma’s blog – many women in fact – felt that she had bravely expressed their own misgivings […] there was something too militant, too aggressive and ultimately something too divisive about the Tambourine Army. The Tambourine Army was not impressed by this critique. To them it was just more respectability politics – an attempt to police their tone, to muffle their rage, an unfair demand to take all that pent up hurt, that lifetime of suppressed pain, and make it all more polite, more reasonable, more acceptable for brown people’s consumption, for male consumption, for good-decent-middle-class-people-who-faint-at-the-word-bomboclawt consumption. 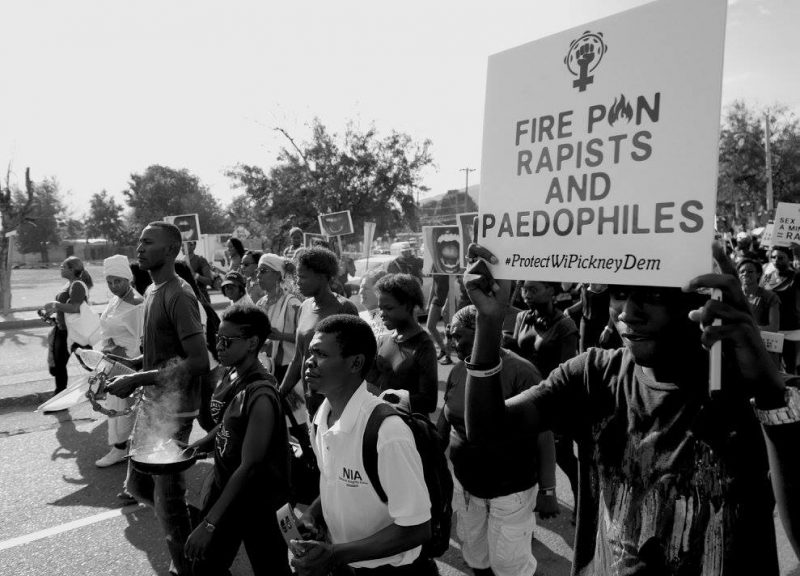 Men marched alongside women in an effort to put an end to Jamaica's rape culture. Photo by Storm Saulter, used with permission.

He went on to make the point that there is a time for fury:

I have not agreed with every utterance from the Tambourine Warriors. […] The binaries they sometimes insist on seem overly strict to me – ‘you either hold to this particular position, or you’re not with us!’ Still, I haven’t felt the need to voice any of these objections. This is not a critical/academic discourse. This is rage. Let it be. Let it do what only it can do. Let it offend and disrupt and dismantle what only it can. If I had been in Jamaica I would have marched and shaken a tambourine in solidarity.

University of the West Indies student Germaine Bryan also wrote about the “brewing revolution” on his blog:

If the women behind this Tambourine Army believe they have exhausted all avenues of ‘proper’ ways to advocate that they taught us in their schools, then I say do what you must to maintain the fight. If you must shout, then shout; if you must march, then march; if you are attacked with force, fight back with force; but please don’t give up the fight.

In a Facebook update, fellow writer Marlon James summarised the situation this way:

After her release on bail, Nugent took to social media to express her gratitude for the outpouring of support:

Yesterday they broke my spirit. Today, because of all of you I am stronger than the concrete that was my resting place last night. The #TambourineArmy has risen.