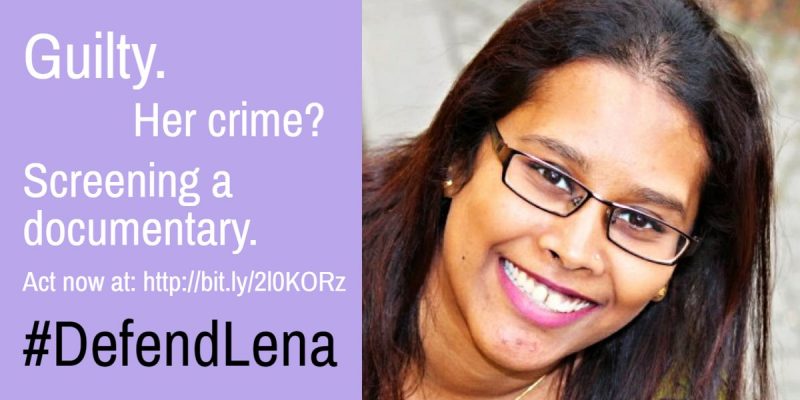 Image from @Callum_Macrae, the director of the documentary

A human rights activist was found guilty by a Malaysian court of violating the country's Film Censorship Act, which bans the screening of videos that don't have approval from the government.

Lena Hendry could face up to three years in jail after the Magistrate Court ruled on February 21 that her group organized a private screening of the documentary titled “No Fire Zone: The Killing Fields of Sri Lanka” without the permission of the Censorship Board.

The film screening, which was done on July 3, 2013, was attended by 150 people. During the show, 30 police officers raided the venue and stopped the program. The Sri Lanka embassy allegedly pressured the Malaysian government to block the screening of the documentary.

The police subsequently filed charges against Hendry, who was then the program officer of Malaysia-based human rights group Pusat KOMAS. In 2016 a local court acquitted Lena Hendry, but prosecutors appealed the decision.

“No Fire Zone” tackles the 2009 Sri Lankan civil war that reportedly killed up to 70,000 Tamil civilians. The producers claimed that the film helped in educating delegates to the UN Human Rights Council about the situation in Sri Lanka.

The documentary was shown at several events in Malaysia and even in the country’s parliament building. But it’s a mystery as to why the police singled out Hendry for screening the film.

For many activists, the Magistrate Court’s ruling proved that the law is a censorship tool that undermines freedom of speech. They urged the government to repeal the “obsolete” and “repressive” law. They also warned that the decision will have a chilling effect in society since it can be a precedent to crack down on other videos and documentaries that criticize the policies of the state.

After the release of the court’s decision last week, Hendry’s friends and supporters were quick to respond and gather public support.

Below is an excerpt of a letter initiated by the producers of the documentary. It is addressed to Malaysian authorities:

The reality is that the law is being used for political censorship, and that is what appears to lie behind the conviction of Lena.

History has vindicated the film. Yet while the perpetrators of the crimes it exposed walk free, Lena faces jail for showing it. Her conviction is a denial of free speech which brings shame on Malaysia and should immediately be overturned.

We continue to be puzzled that while the police found no basis to detain Lena’s colleagues who were also present in the same event, she was singled out and charged with committing an offense. This contradictory double standard action reflects the inconsistency in the prosecution and the ridiculous nature of Lena’s arrest and subsequent conviction for screening a documentary film.

The Centre for Independent Journalism described the court’s ruling as an attack on free speech:

This demonstrates the targeting of civil society by the Malaysian government for promoting discussions on human rights and expression of political viewpoints. Censorship laws – whether impacting journalism or creative content – are drawn up and implemented arbitrarily, and historically abused to silence critical content.

The Southeast Asian Press Alliance joined Malaysian activists in demanding the repeal of the law:

Section 6 of the Film Censorship Act in particular is ridiculously obsolete in the context of today’s communications technology which allows anyone with an internet connection to access an unlimited number of films that did not pass through the censorship body.

The hashtag #DefendLena is being used by Hendry’s supporters to inform the public about her case.

Screening, sharing, watching and making films is not a crime. #defendlena #nofirezone