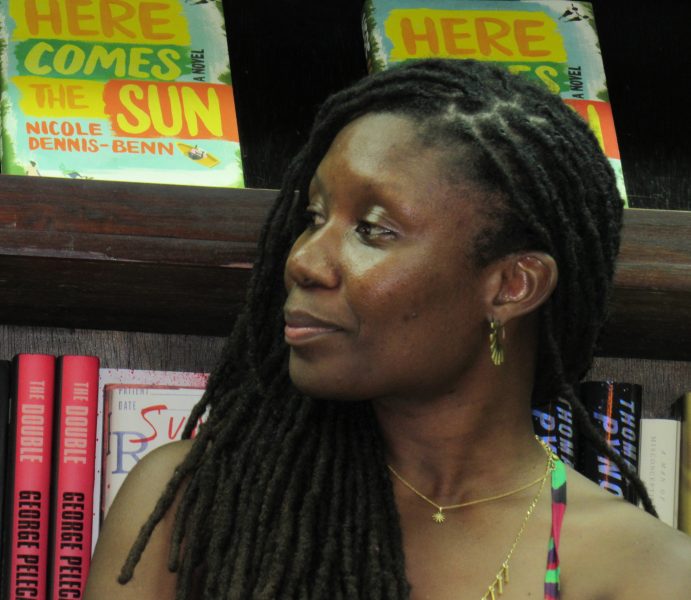 “A story waiting to be told” is how Booker Prize-winning author Marlon James describes “Here Comes the Sun,” the debut novel by Nicole Dennis-Benn — who, like James, is a Jamaican novelist living in the United States. The novel has garnered positive reviews, including in the New York Times.

Dennis-Benn's recent visit to the island of her birth coincided with an ongoing, stormy discussion in the Jamaican media — particularly social media — and in the public domain about sexual abuse. In Jamaica, exploitation of young women in difficult economic circumstances is fairly common, and the perpetrators are often older men who hold positions of privilege in society.

The debate was sparked by the case of a pastor in the Moravian church, who has been charged with having sex with a 15-year-old girl. As the resulting scandal, revelations and often bitter discussions continue, church leaders have resigned and allegations of child abuse against other church key church figures are being investigated. Dennis-Benn's book honestly confronts many of these issues. Global Voices asked the author about the evolution of her work and how she tackles these difficult issues in her novel.

Global Voices (GV): Tell us a little bit about your journey as a novelist. Did leaving Jamaica help you to develop your writing? When and how did you feel empowered to write?

Nicole Dennis-Benn (NDB): When I left Jamaica at 17 years old for college in the United States, I wrote to cope with my homesickness. I realized then that it was more than a coping mechanism, [it was] my passion — a passion I wouldn’t have gotten to explore had I stayed in Jamaica. As Jamaicans, we were raised to honor traditional professions such as medicine, law, business and politics, but not the arts. I was the first in my family to attend college and thus felt it was imperative that I not let my family down by doing something of no value to them. I was determined to be a doctor then, taking pre-med courses at Cornell University, because in the eyes of every working-class household, medicine is among the top professions […] to pull us out of our socio-economic bracket. Years later, I got the courage to pursue a Master in Fine Arts in Creative Writing at Sarah Lawrence College after graduating with a Master’s in Public Health and working in the field as a researcher at Columbia University. I was still timid about fully immersing myself in writing and even calling myself a writer, though I was writing constantly. Most of that diffidence came from what I had internalized growing up. However, I am glad that I took the leap, because I would not have been happy with a flashy career doing something I don’t want to do for the sake of status.

Moreover, had I stayed in Jamaica as a working-class Jamaican, I would not have had the time or the opportunity to nurture my passion in writing, which would’ve been deemed a luxury. Also, I would not have been able to step outside the mental rut of survival to critically analyze the culture and write from an honest perspective. Therefore, it took leaving the country and processing the reasons why I felt the need to leave in the first place, which contributed to my desire to write.

GV: Do you think this will be uncomfortable reading for some Jamaicans? It is so close to reality for many Jamaican women.

NDB: So far, the book has been well received by Jamaicans. I think more than anything else, they appreciate the honesty and the fact that it tackles universal themes they can identify with, regardless of their personal experiences or beliefs. For example, themes such as love, loss, identity, acceptance, and displacement are all themes people can connect to. Many Jamaican women have reached out to me thanking me for writing a book like ‘Here Comes the Sun’. For one, we live in a culture of shame and secrecy; and for the first time, Jamaican women see their stories of sexual assault and questions of self-worth being tackled on the page without it demonizing them or portraying them as caricatures. It is important to them to see themselves reflected on the page by a writer who is one of them. Again, this reminds me of why I write. As Marcus Garvey says, ‘Only us can free us’, and if we don’t begin to have open dialogues about what ails us as women in our culture and society in general, then we will never heal.

GV: You mentioned that you struggled with your portrayal of the character of Margot and her sexuality. Can you closely relate to her in some ways, as a lesbian from Jamaica?

NDB: Yes, I relate to Margot a lot. Not only because of her sexuality, which was hard for her to accept given the cultural norms; but because like Margot, I too desperately wanted upward mobility in a country I love dearly, but had no idea how to achieve it. Unlike me, Margot had the guts to make unpopular decisions to get what she rightfully deserves — which is equal opportunity in a country where wealth is unequally divided; made available to people of a certain hue, class, and last name. Margot broke that barrier, and that is why I proclaim her as my heroine.

Also, with wealth comes acceptance too. In ‘Here Comes the Sun’, Margot makes [that] clear when she expresses her desire to live in Lagoons with her lover, Verdene Moore, which promises to shield them, given that Lagoons is a wealthy gated community in Montego Bay. For in Jamaica, class and socio-economic status are determining factors in whether or not one can live freely and happily as an out gay or lesbian. 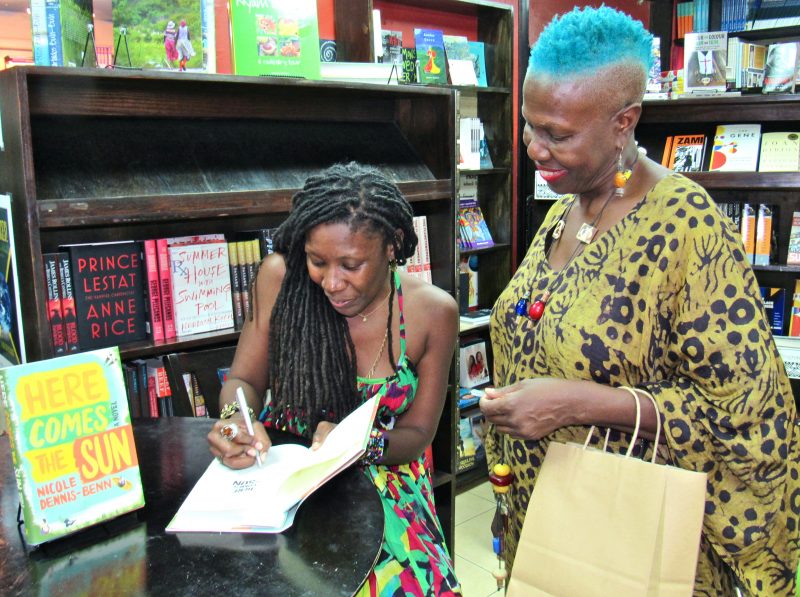 At the book party for her novel
‘Here Comes the Sun’, Nicole Dennis-Benn signs a copy of her book for Professor Carolyn Cooper. Photo by Emma Lewis, used with permission.

GV: “Here Comes The Sun” is a bright, optimistic song, and the cover design reflects this, too. Do you feel optimistic about Jamaica?

NDB: The title of the book certainly has nothing to do with The Beatles’ song! In my novel, the sun is symbolic — an irony, in that we were raised to fear the sun as darker skin Jamaicans. In my book, it is that very same sun that becomes an illuminating factor, revealing the realities and ugliness of desperation inherent in poverty. Like I said, we cannot begin to be optimistic about change as a people or as a society if we are not willing to face this ugliness. We have to face it, and have honest dialogues about it, in order to move forward.

GV: Who or what inspired you to write? Do you have any literary influences — especially any Caribbean writers?

NDB: I was very much inspired by Edwidge Danticat and Paule Marshall, both Caribbean authors who aren’t afraid to delve into the complexity of Caribbean women on the page. I found that growing up, I was exposed to white and male authors. I never saw writers writing who looked like me both in gender and complexion, and dare I say, class. Danticat and Marshall represented that hope I desperately needed as a young aspiring storyteller who wanted to write about the people and place I love dearly in an authentic way.

GV: Your visit to Jamaica this time coincides with an ongoing — and very vigorous — public debate on the island about violence against women and girls. Do you have a message for Jamaican women? Do you feel now might be the right time for dialogue and healing?

NDB: Now is certainly the right time for dialogue, which is a prelude to healing. Though it might seem uncanny that ‘Here Comes the Sun’ touches on the very issue being lamented currently about the sexualization of our young girls, I initially wrote the book to dismantle the silence. My female protagonists in ‘Here Comes the Sun’ have all suffered sexual abuse, Delores inevitably saying to her own daughter, Thandi — who had been through the same thing — what many Jamaican mothers would say, ‘Is nuff woman it ‘appen to. Jus’ move on.’ This is how the secret thrives. Growing up in Jamaica, I’ve always been aware of this, my own innocence destroyed by my elders’ warnings about being vigilant as a young girl in society. God forbid if anything happens, it sets the young girl up to believe it was her fault. Many girls and women suffer the aftermath of sexual assault in silence, believing it was their fault. I want to use my art to give them a voice.

Also, another elephant in the room, which we need to address as a country, is poverty. Yes, we are going to have defeated, impoverished women thinking their only value is between their legs. For what else do they have to offer without proper education and opportunities for upward mobility? We are also going to have mothers who use their daughters as currency; mothers who cannot afford to feed their children or send them to school, and thus resort to using their girl-children to pay their way forward. Again, this is a result of a deficit in better opportunities. I’m not condoning this, but it is a reality that we must address as a nation without demonizing the women desperate enough to do such things and/or have knowledge of it happening behind their back and not question it. My character Delores sold her daughter, Margot, into prostitution for the very same reason that the poor mother […] in the recent news about the Moravian Church sex scandal — who knew her under-age daughters were bringing home groceries from sleeping with that Moravian pastor — did. When I sat down to write ‘Here Comes the Sun’, my goal was to humanize this woman and the hundreds more like her in our society, especially for policy makers who have the power to change this reality; to give free education and opportunities to women and children in our society to advance.