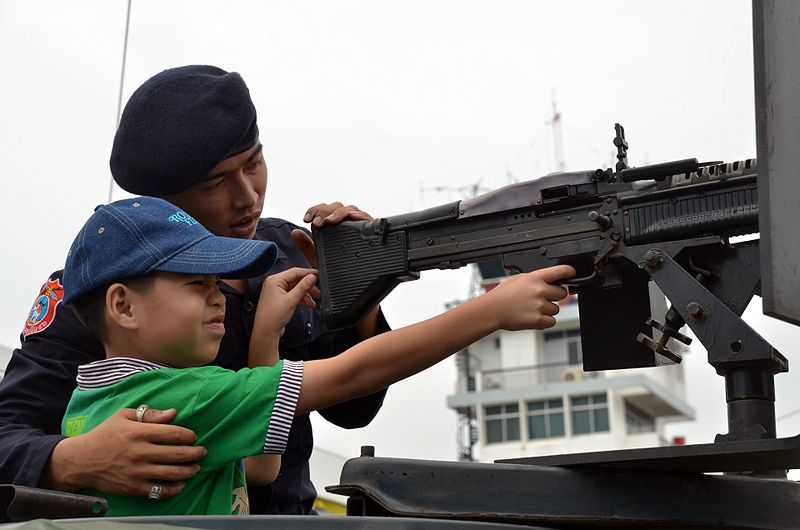 Children's Day at the Chiang Mai Air Force base in Thailand. Photo from Wikimedia Commons

Children’s Day in Thailand is an annual celebration wherein various activities are organized across the country to inspire the future generation. This is the day when kids are given free rides and free access to museums, government buildings, and even army camps replete with weapons.

For many advocates of children’s rights, this practice which has become almost a tradition in the past few decades, amounts to a dangerous promotion of violence within society. Critics of the junta which grabbed power in 2014, see it as a mind-conditioning activity that helps justify military rule in the country, and the military itself does little to alter that perception.

Since the 1930s, the army has launched more than a dozen coup attempts in Thailand.

In a local media report titled “Trigger Happy: Thai Children Get Hands on Tanks, Jets, Guns for Children's Day”, one soldier who interacted with five-year-old kids during this year's celebration justified the use of real military hardware:

A child gets a grip on an Israeli TAR-21 assault rifle for Children's Day at the King's Guard's 2nd Cavalry Division in Bangkok pic.twitter.com/qpgzi7vN8w

The main element of Children’s Day is that the army — which has never fought a real war against any foreign enemy but repeatedly crushes Thai democracy — invites kids into military camps where they can be brainwashed by being given lethal weapons to play with.

His opinion was shared by netizens who disapprove of the use of guns to educate children.

Since last year, the army has launched a number of aggressive information campaigns targeting children, such as reforming the school curriculum to promote Thai values, recruiting cyber scouts to police the Internet, and holding boot camps for preschool children.

Writer John Draper describes the military-sponsored training of kindergarteners as a form of “systematic militarized indoctrination.”

How long that indoctrination will continue is impossible to guess. If civilian rule is ever restored in Thailand, will the new government also continue to expose children to big guns and tanks?