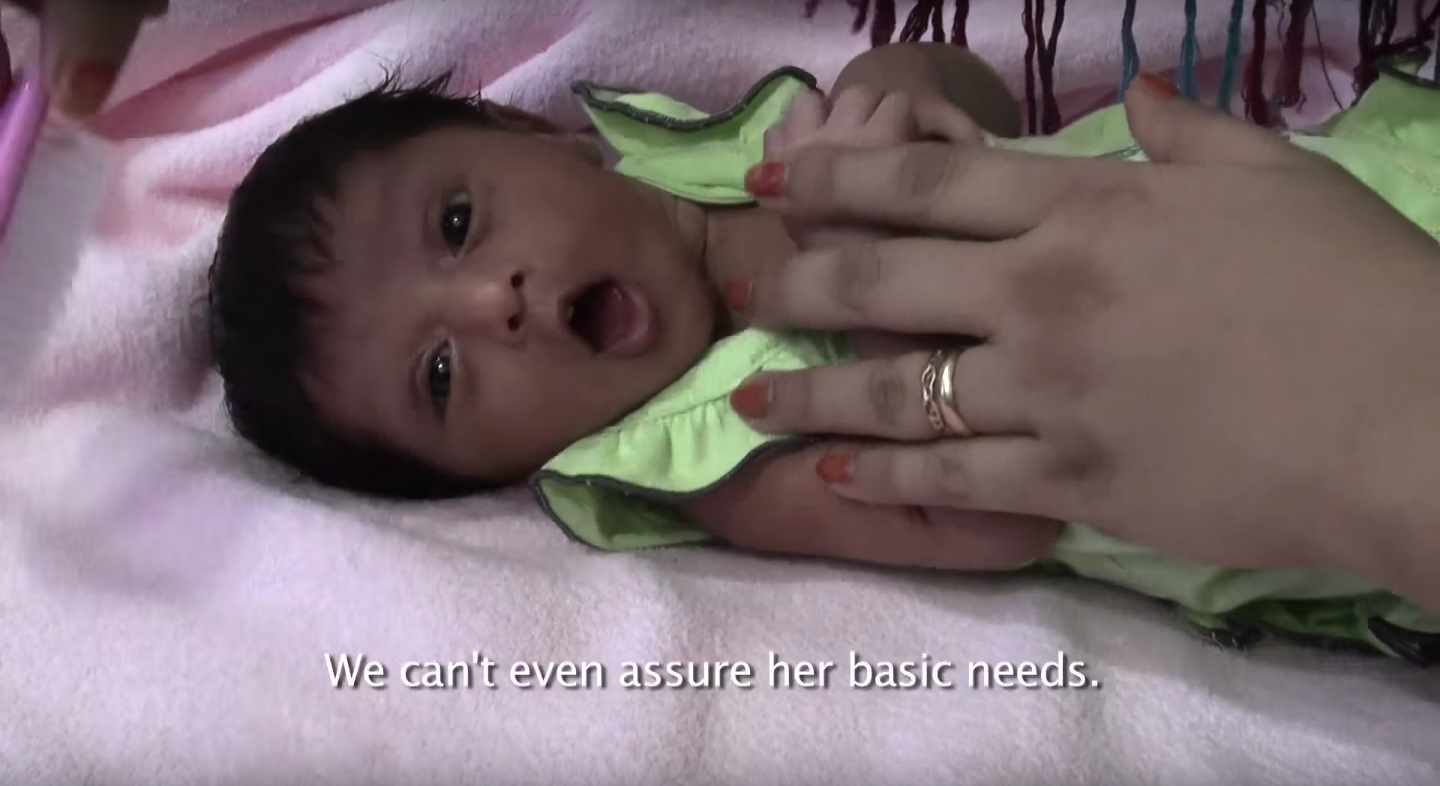 Screenshot from the MSF USA documentary ‘War in Aden: Surviving the Everyday’ showing a malnourished child in Yemen. Source: Youtube.

“Hunger is the most dominant thought on Yemenis minds during this period”, Yasser Rayes, an author at the Yemen Times, recently wrote.

Over the past few months, several humanitarian groups have launched appeals to tackle the issue of hunger in Yemen, largely aggravated by the Saudi-led coalition's bombing of the country. As is often the case, children are the most severely affected by the crisis.

In August of 2016, Medecins Sans Frontieres/Doctors Without Borders’ (MSF) foreign correspondent Sophie McNeill called it a ‘war on children‘. This ‘war on children’ includes the many reported attacked on hospitals by the Saudi-led coalition, including hospitals run by MSF, since the start of the civil war, most notably the bombing of a MSF-run hospital in Abs, Northern Yemen, on August 15, 2016, that left 11 dead.

In September of 2016, MSF released the results of its investigations into airstrikes on the hospital in Abs and on a clinic in Taiz, a city in south western Yemen, in December of 2015. The investigation, according to CNN, revealed that:

The neutrality and impartiality of the facilities had not been compromised before the attacks and therefore there was no legitimate reason to attack them […] The details of the incidents documented in these two reports are unambiguous indicators of how war is being waged in Yemen, where there is an utter disregard for civilian life by all warring parties.

The attacks lead to the withdrawal of MSF from the northern part of the country, making the desperate situation there even more desperate.

The apparent targeting of hospitals has deepened the humanitarian crisis already occurring in the country. According to humanosphere:

Some 18 million people need assistance. When the government collapsed, basic services like trash pick-up stopped. And with food supplies cut off, millions are going hungry. The World Food Program projects that the number of food-insecure people could rise from 14 million to 21 million if the situation does not improve. Not only can hunger lead to death, but for those who survive, there are long-term consequences such as stunted growth and irreversible brain damage.

The Yemeni section of the United Nations Office for the Coordination of Humanitarian Affairs (OCHA) has reported that cholera cases have increased.

According to UNICEF, at least one child dies every 10 minutes in Yemen because preventable diseases such as diarrhoea, malnutrition & respiratory infections.

At least one child dies every 10 minutes in #Yemen because of preventable diseases such as diarrhoea, malnutrition & respiratory infections. pic.twitter.com/k56a1SmVGd

The conflict in Yemen has taken a devastating toll, particularly on the most vulnerable members of society: children.

Even before the outbreak of conflict in March 2015, Yemen faced challenges from widespread poverty, food insecurity and lack of health services. But now, with more than 3.2 million people displaced, food and fuel imports cut short and livelihoods destroyed, more than four in five Yemenis are in need of some kind of humanitarian assistance.

During the first year of the conflict, more than 900 children were killed, constituting one third of all civilian deaths. Thousands more are wasting away because of deprivations caused by the conflict. UNICEF estimates that 370,000 children in Yemen face severe malnutrition, while 2.2 million children need urgent humanitarian assistance to prevent a further deterioration in their nutritional status. Even after the conflict ends, the effects of malnutrition – stunted growth and delayed cognitive development – may linger. In the worst cases, it is fatal.

The number of out-of-school children – already high before the conflict – has ballooned to 2 million as more than 350,000 additional children have been unable to attend school because of closures. Education for these children cannot wait.

The country’s water and sanitation infrastructure has also been ravaged, posing serious health risks. Restrictions on the importation of fuel have disrupted the delivery of water to millions of people in one of the most water-scarce countries on Earth. Fuel shortages have also curtailed access to health care, as hospitals are unable to power the generators they need to function.

On 6 October 2016, health authorities in Yemen confirmed a cholera outbreak, posing an increased health risk to the population – especially children – given the crumbling health system in the country. 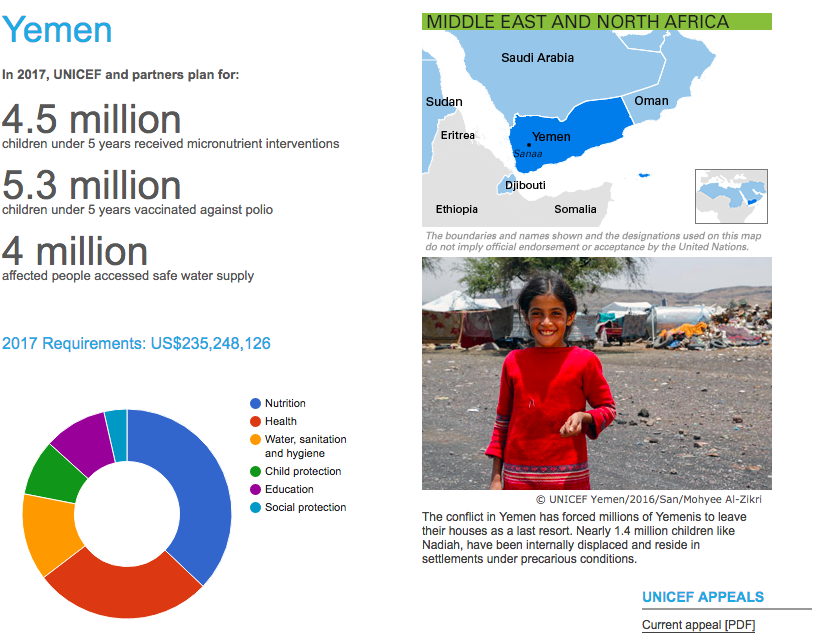 Screenshot of the report showing the scale of the humanitarian crisis. Source: UNICEF Yemen.

In response to UNICEF and others’ appeals, several humanitarian groups have launched their own appeals.

The World Food Program is delivering emergency food assistance and has called for urgent support to aid the humanitarian response, emphasizing Yemeni children:

Save the Children sent out an ‘Emergency Alert’ about the situation in Yemen, saying:

War has ripped through what was already the poorest country in the Arab world. A staggering 18 million people are now in dire need of aid. One in three of Yemen’s young children are severely malnourished. And a staggering 7 million children go to bed hungry every night.

Erin Hutchinson, Yemen director for the aid agency Action Against Hunger, said: “We’re seeing a worsening situation as the conflict continues, and it’s not stabilizing. The needs are only deepening at the moment.”

Relief International has several programs in Yemen. CARE, on its part, focuses on “Water, sanitation and hygiene services and reproductive health services to needy populations in Yemen.”

In recent days, meanwhile, social media users have been trying to catch the world's attention in order to fight child hunger using the hashtag #SOS_YemenGenocide on Twitter.

#Yemen Children starving Due to the blockade by #Saudi coalition @theresa_may#SOS_YemenGenocidepic.twitter.com/u1YluNS3RE