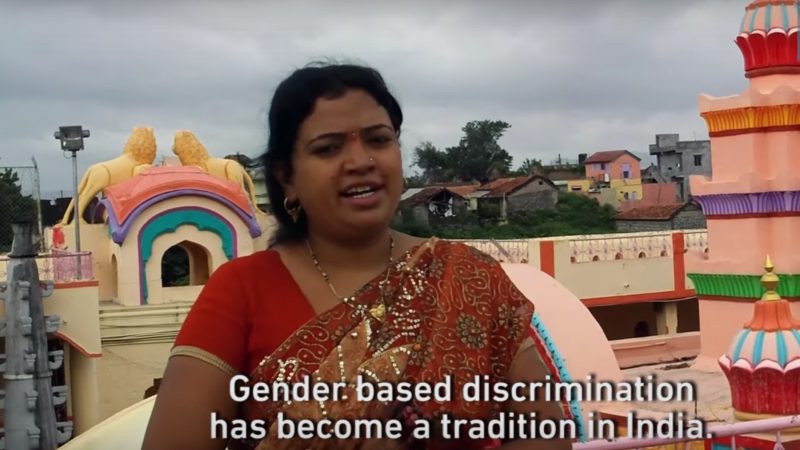 Across the history of many world religions, women were considered ritually unclean because of menstruation and the beliefs surrounding it. This social perception led to women being denied entry into religious sites for centuries. In India, women are challenging and changing these centuries-old traditions that restrict women's rights.

No women were allowed in the Shani Shingnapur temple in Ahmednagar district of Maharashtra for the past four centuries. On November 28, 2015, a woman entered the inner sanctum called the “sacred platform” to offer her prayers. Enraged by this act, the villagers of Shingnapur shut their businesses for a day. Seven security personnel were sacked, security was tightened with more CCTV cameras, and everyone at the temple was warned to be more vigilant in order to keep women worshippers at bay.

Subsequently activists from Trupti Desai-led Bhumata Mahila Brigade tried to enter the Shingnapur temple but were denied entry. The matter escalated and reached the Bombay High Court on April 1, which ruled:

Those who prevent women from entering the places of worship should be arrested….they face six months jail under the Act.

On April 8, 2016, the Shani Shingnapur temple lifted its ban on women. However, there are still many temples in India where such bans continue.

For example, the Maskoba temple in the Veer Village of the Pune District in the Indian state of Maharashtra, was still refusing to let women enter the inner sanctum of the temple after the court order. Video Volunteers‘ community correspondent Rohini Pawar decided to do something about it.

Rohini an atheist, and fierce advocate of women’s rights, took up the matter up with the community at first, and then with the temple authorities.

In the video, Rohini asked: “If we all have equal rights and freedom then why such restrictions on women?”

She spoke to the women in the community and realised they have never protested this practice, due to the fear of backlash for violating traditional practices.

With the help of a local NGO, she made a petition to the Maskoba temple authorities.

The temple authority honored the petition and after lengthy discussions allowed women to enter the inner sanctum of the temple. On April 13, local women broke with tradition and entered the temple.

Along with Hindu Temples like Shani Shingnapur or Sabarimala, entry for women has for years been traditionally prohibited in the Muslim holy place Haji Ali Dargah in Mumbai. The Supreme Court of India delivered a verdict October 24 after a long court battle that upheld equal access for men and women to the sanctum sanctorum of Haji Ali Dargah. Only last month a group of women activists were finally able to enter the Dargah.

Great news! Women should be allowed to enter every single religious institution in India – be it a dargah or a temple. #RightToPray https://t.co/LCptZm2Ttk

These judicial rulings have provided the legal grounds for a pushback against gender discrimination at holy sites while women activists live Rohini continue to drive change on the ground.

However, as this tweet demonstrates, there is still a long way to go.

The High Court of the most educated state in #India directs #women to dress a/c to the wishes of the temple priests. https://t.co/OplVKKJjcq

Video Volunteers, an award-winning international community media organization based in India, is a content-sharing partner of Global Voices.