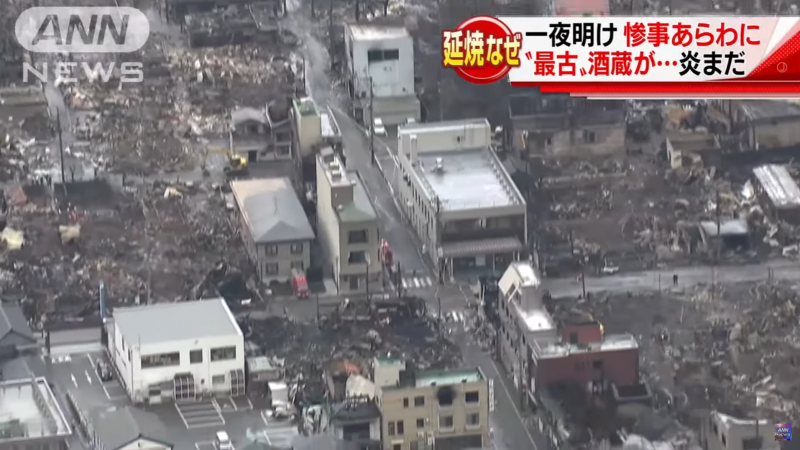 Caption: “Why did the fire continue for so long?” Firefighting lasted until daybreak… Oldest sake brewery in Niigata destroyed. Fires continue to smoulder. From ANN YouTube Channel.

On December 22, a fire at a restaurant sparked a major blaze that destroyed 140 buildings in the small city of Itoigawa in rural Japan. While there were no deaths, more than 300 people were displaced and it took nearly a day to extinguish the fires. It was the biggest fire in 20 years in Japan not caused by a natural disaster, and spectacular scenes of the blaze made headline news and were shared on social media.

TBS [television network] has started broadcasting a live feed of the fire. This looks like a major blaze!

While the crowded cities of Japan frequently experienced such conflagrations in the past, thanks to better building standards and fire prevention, devastating blazes are now relatively rare.

Unlike many other cities and towns in the region, Itoigawa, with a population of 44,000, was never bombed during the Second World War, so the downtown is packed with older wooden buildings that line arcade-covered streets. The fire occurred on the north side of Itoigawa train station, in a neighborhood squeezed between the rail line and the Japan Sea.

The fire comes just as Japan is getting ready to observe the New Year's holiday, one of the most important events of the year for families.

I live in Itoigawa, and we could see the fire from our school. I think my friend's house burned down. Winter vacation starts tomorrow, and I feel like I could cry. The fire still hasn't been put out, and I feel really worried.  I just hope it can be extinguished somehow.

Television reports stated that the owner of a ramen shop put a pot on the stove and left it to run errands. A fire started in the ramen shop, and strong winds quickly fanned the blaze throughout the neighborhood.

[Itoigawa fire] An resident who was evacuated said that “flames were everywhere, and it was just like an air raid.”

Many of the buildings were more than 80 years old. Pubs, restaurants and hotels that were the face of Itoigawa were burned to the ground.

The fire destroyed the Kaganoi Shuzu sake brewery, which had been established in 1650 and was reportedly the oldest sake brewery in Niigata Prefecture. There were other breweries in the neighborhood as well.

There were many other buildings connected to sake brewing in the neighborhood besides Kaganoi. I just hope they can all be rebuilt.

Itoigawa sits alone on an isolated stretch of coast on the Japan Sea. Steep mountains rise up straight from the sea, making Itoigawa the only sizable settlement in the region. The fire could be seen from down the coast.

Smoke from the Itoigawa fire. You could see the fire from Toyama Prefecture [about 40 kilometers away].

It took nearly a day to put the fire out. After that, residents and officials surveyed the damage.

I went to Itoigawa to observe the extent of the damage. I am at a loss for words to describe what I saw. [The prefectural government] will work with the city of Itoigawa to help with cleanup and rebuilding efforts, and revitalizing the town, as well as assisting those who have lost their homes and livelihood.

Japanese aid organizations quickly leapt into action, providing supplies for the 740 in 360 households affected by the fire that had been moved to three shelters.

A major fire has occurred in the city of Itoigawa in Niigata Prefecture. We have delivered bedding and toiletries for 200 people, as well as other supplies. We have also dispatched one doctor and two nurses to the scene, and we will continue to monitor the needs of the people affected. — Japanese Red Cross

For many, there is a sense of loss after the fire destroyed much of Itoigawa's heritage. One Twitter user posted photos of a favorite restaurant, presumably destroyed in the fire.

Tsurugiya restaurant has been in business for 195 years. It had many rooms like this that possessed refinement and elegance. Ah…. #itoigawa