Corporate Japan must now offer stress tests to overworked employees. But is it enough? 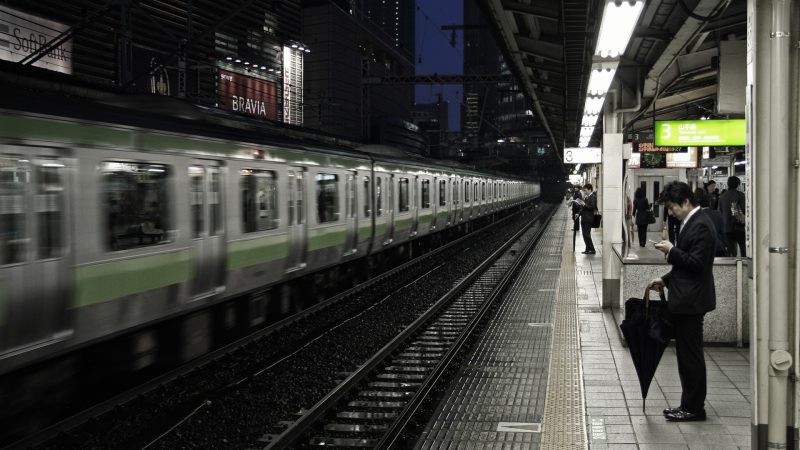 Japanese workers wait for the train home after a long day at the office. Image from Flickr user tokyoform.

In light of a rise in work-related mental health problems, the Japanese government has revised the law to urge businesses to offer annual “stress checks” to their employees. This non-mandatory mental health check will be in addition to the yearly medical check-ups which companies are already required to provide.

The stress will come in the form of a 57-question multiple choice questionnaire. It includes measures such as “I have an extremely large amount of work to do,” and “I am exhausted.” Test-takers are given four response options ranging from “very much so” to “not at all.” Employees are encouraged to take the test, although it is not required.

The purpose of the test

As reported by Yahoo News Japan, stress checks were introduced in response to a recent increase in mental health issues, in the hopes of preventing mental illnesses like depression.

The number of cases of depression has been rising sharply since 2000. The Ministry of Health, Labour and Welfare revised the Industrial Safety and Health Law to oblige businesses with over 50 employees to offer annual stress checks, to be conducted by doctors or occupational health nurses, starting from December 2015. By having stressed employees talk to a doctor, the initiative aims to prevent mental health problems early on. 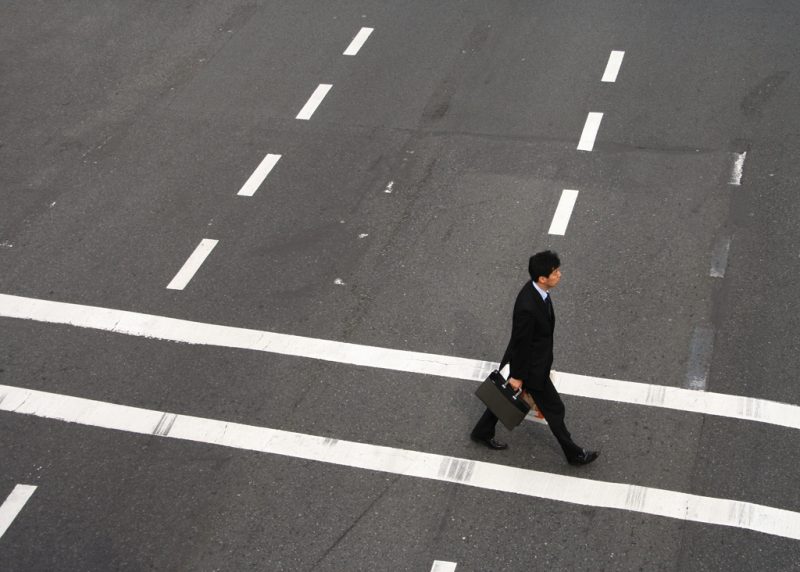 A salaryman crosses the street. Image from Flickr user tokyoform.

While the end of November marks the deadline for the first annual check, many companies are lagging behind. TBS News reports:

With the deadline at the end of the month inching closer, the Health Ministry has provided companies with free software to help them implement stress checks, but according to a survey conducted by a private company, only about 30% of companies with fewer than 1,000 employees have introduced the checks thus far.

Will stress checks be effective?

Because they are not mandatory, employees may be reluctant to submit to the checks, and while the interviewing doctors can provide employers with advice based on the results (which are confidential), ultimately, it is up to companies to create better work environments.

Some Twitter users have even complained that, somewhat paradoxically, the test itself is stressful.

There's nowhere for me to write, “I feel stressed as a result of this stress check.”

Working to live, or living to work?

Work-life balance is a somewhat unfamiliar concept in Japan, where loyalty to one's company often comes first. While OECD data indicates that, on average, Japanese work comparable hours than their counterparts in other developed nations, with the US and Israel racking up more work hours than Japan in 2014, these statistics can be misleading for a number of reasons.

Firstly, much of Japan's workforce is made up of part-time workers. The liberalization of Japan's job market has meant increasing numbers of women, young people, and retirees taking on part-time work. These part-timers, who are not expected to put in the kind of hours that are required of workers in more typical full-time “salaryman” type positions, bring the average down.

Full-time workers, on the other hand, often work gruelingly long hours. An August white paper reported that nearly one in four companies have some employees do more than 80 hours of overtime per month.

Another important factor is the number of overtime hours that go unrecorded (and unpaid). While the law places restrictions on how many hours employees are allowed to work in a week, one way that companies can get around this is by having employees do their work off the clock. Young employees in particular are often pressured into doing unpaid overtime in order to hold onto their jobs, and excessive workloads often leave employees with little choice but to put in overtime, even if it is goes unrewarded. 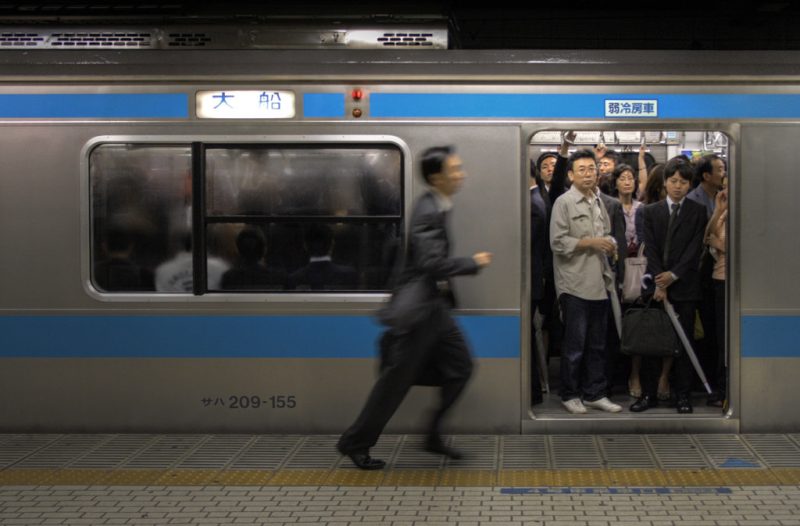 Death by overwork is so prevalent in Japan that there is even a word for it: karoshi (過労死). The term refers to death from health issues like heart attacks and strokes resulting from long periods of extreme stress, or suicide by overworked employees.

In 2015, 93 suicides and attempted suicides were officially recognized as overwork deaths and eligible for compensation, and 96 deaths from heart attacks, strokes and other illnesses were linked to overwork.

“I have lost all feeling except the desire to sleep.”

A notable case is that of 24-year-old University of Tokyo graduate Matsuri Takahashi, who took her own life on Christmas Day last year after being forced to work long, hard hours at advertising giant Dentsu. The case carried echoes of that of another young Dentsu employee, a man, also 24, whose death was ruled to be the result of horrendous working conditions by Japan’s highest court.

Takahashi documented her growing fatigue and the verbal abuse she suffered at the hands of her boss on Twitter:

-They decided again I’ll have to work Saturdays and Sundays. I seriously just want to end it all.

-I have lost all feeling except the desire to sleep.

-My boss told me I have no femininity. Even if he was just trying to get a laugh, I can’t stand this anymore. 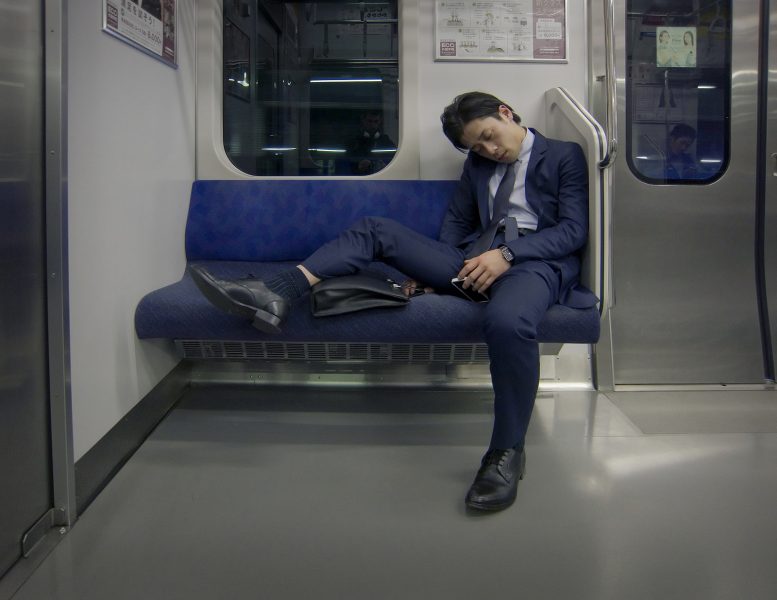 An exhausted salaryman sleeping on the train. Image from Flickr user tokyoform.

Some might wonder why overworked employees don't simply quit. After Takahashi's suicide was ruled to be an official case of karoshi, a comic offering insight into the mindset of these worn out, depressed workers by an illustrator who goes by the name Kona Shiomachi went viral on Twitter:

My past experiences, and what I was thinking at that time. Feel free to share.

The time I almost unintentionally killed myself
At the time, I was working 90-100 overtime hours per week (less than many of my colleagues). Every day, I would rush to catch the last train.
“Phew! I made it.”
At no point did I ever want to die.
But at that moment, standing on the empty platform, a single thought crossed my mind.
“If I were to take one more step, I wouldn't have to go to work tomorrow!”

“When you work over 100 hours of overtime, you won't have time to be with your family, friends or lover… You start to think, […] ‘I don't know why I'm living this life.'”

Shiomachi explained that when people are that overworked, they aren't capable of making rational decisions, including on whether to change jobs. “It’s almost impossible for workers to take a break or leave the company. When you’re exhausted beyond the limit, your mind avoids thinking about that,” she said.

Overwork can lead to a dark spiral of negative thoughts, according to Shiomachi: “When you work over 100 hours of overtime, you won't have time to be with your family, friends or lover, or even time to enjoy your hobby. Then, you start to think, ‘I don't know what I'm working for,’ which leads to thinking ‘I don't know why I'm living this life.'” 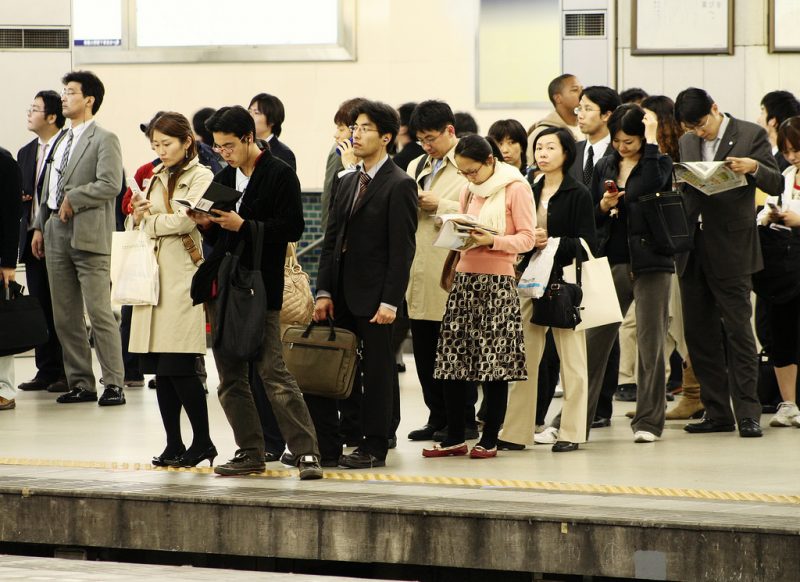 Commuters waiting for the train. Image from Flickr user tokyoform.

The small advertising company where Shiomachi was working as a designer, and Dentsu, with its notoriously harsh management practices and long overtime hours, are what some might describe as a “black company”, or burakku kigyou (ブラック企業). The term is generally used to refer to companies with highly exploitative employment systems.

Many black companies hire a lot of young employees, often recent university graduates, and force them to work under poor conditions. Excessive overtime, verbal abuse and sexual harassment are not uncommon at black companies.

The term “black company” originated in the IT industry in the 2000s, and in 2012, a group of journalists, activists, and university professors formed a special committee to create the “Black Corporations Award” where the public could vote on “the most evil corporations of the year.” It is now an annual award. Black companies span various industries; 2015 award winners include a convenience store, moving company, and “cram school” management company.

It seems that the “Black Corporations Award” has achieved its goal of raising awareness of crooked business practices; the black company problem has received more and more attention in recent years.

I know it's impossible, but we're paying you, so make it happen.

It's his fault he collapsed. He wasn't taking proper care of himself.

What's more important to you: raising your children or this job?

While these statements seem unreasonable to the point of lunacy, they reflect the perspective of management at some companies. 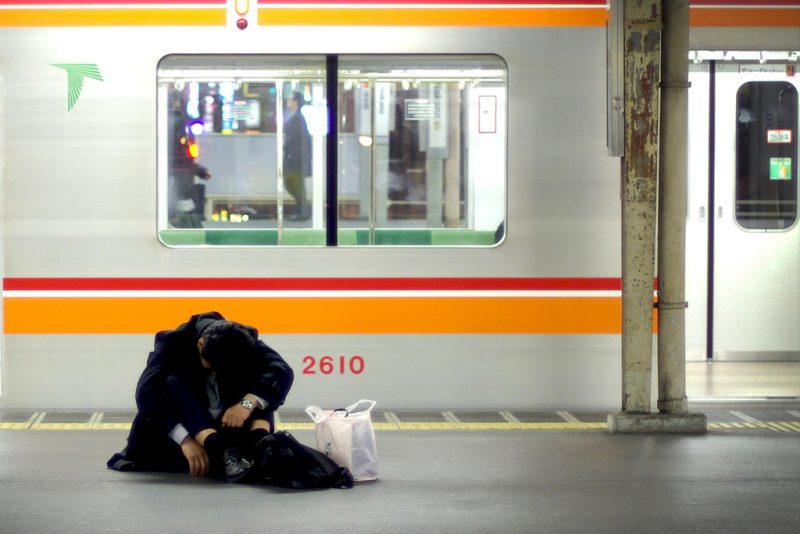 A frazzled salaryman doubled over on the floor. Image from Flickr user Reuben Stanton.

It's great that the government is trying to crack down on black companies and curb the incidence of work-related depression and karoshi with regulations aimed at reducing overtime and the introduction of stress checks, but it will only work if companies are willing to change. Hopefully, increased awareness will bring real progress. The lives of young, talented people like Matsuri Takahashi could be at stake.