The entrance to the Myitsone Dam project. / Nan Lwin Hnin Pwint / The Irrawaddy

This article by Nan Lwin Hnin Pwint is from The Irrawaddy, an independent news website in Myanmar, and is republished on Global Voices as part of a content-sharing agreement.

It has now been five years since the Myitsone Dam project in Northern Myanmar was suspended, but a local ethnic Kachin man, Mung Ra, is still not satisfied. He wishes that the project had been entirely terminated.

He frequently laments the loss of his farm and bamboo plantation—he had to leave these behind when he was forcefully relocated for the project.

Mung Ra used to live in Dawn Ban, one of over 20 villages that were relocated to make space for the Myitsone Dam. He and his fellow villagers had to leave Dawn Ban behind in 2011 because the village lies in an area designated for a sluice gate.

Bamboo trees are not useful to urban residents, but to people like Mung Ra—who live alongside the “Myitsone” confluence of the Mali and N’mai rivers, which forms the Irrawaddy River 26 miles north of the Kachin State capital Myitkyina—bamboo is a crucial source of income. 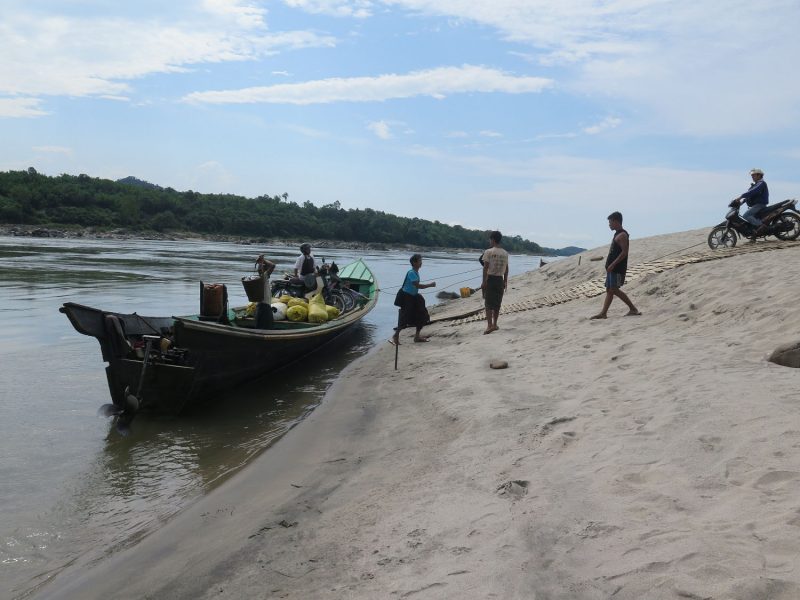 “Bamboo is the source of our livelihood. We sell bamboo in towns to producers of bamboo matting. And we use this money for our household expenses,” said Mung Ra.

In 2011, locals were ordered to move as farmlands and bamboo trees were cleared for the dam project. Each household only received 100,000 kyats (about US$78) for moving expenses, and the authorities compensated villagers 5,000 kyats ($4) for each cluster of bamboo plants cleared. No compensation was given for the actual farmland left behind.

Dawn Ban villagers were relocated to new homes in Mali Yang village, where new spaces were created by clearing farms and bamboo plantations—which of course had been a source of income and indeed livelihood for the villagers of Mali Yang. Moreover, Mali Yang locals had to give up their farms in order for roads, also part of the project, to be constructed. 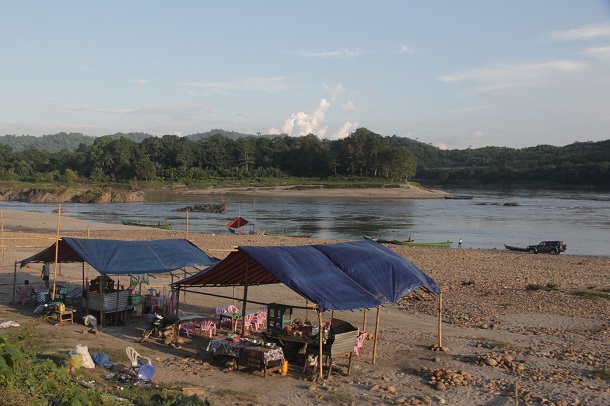 Shops on the banks of the Myitsone.(Photos: Nan Lwin Hnin Pwint / The Irrawaddy)

Brang Mai of Mali Yang village recounted his experiences: “I’ll never forget the day when Chinese men came to check terrain conditions for road construction in December 2011. We were drying paddy on the embankment, and because they didn’t want to walk in the mud, they stepped on the paddy with their shoes.”

Since then, Mali Yang residents have reclaimed bushes for farming, but even so, those lands are not fertile enough.

Farms were previously close to the Mali Yang village, and it only took approximately three months to farm for the year. But now, the new farming site is some 10 miles away from the village, presenting a great inconvenience to villagers.

This story is not unique. About 3,000 people from some 20 other villages face hardships similar to those of Mung Ra and Brang Mai.

An agreement on the China-backed $3.6 billion-dollar Myitsone Dam was signed under the military regime of former Snr-Gen Than Shwe, and construction of the project started in 2009. The China Power Investment Corporation is the developer. Under the agreement, China would receive about 90 percent of the power generated. 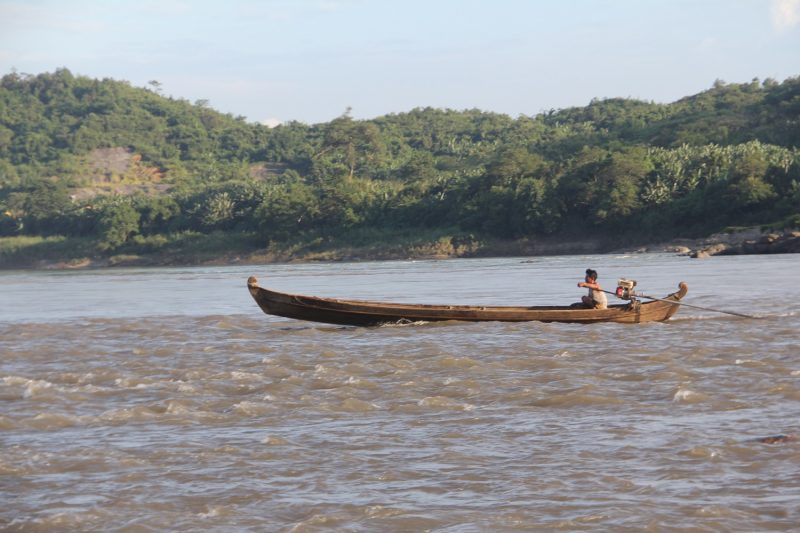 Yet in the face of opposition from local ethnic Kachin and environmental and political activists, former President Thein Sein suspended the project in September 2011.

The previous government, however, granted licenses to gold mining companies along the confluence after the relocation process. The Irrawaddy visited this area earlier this month and found that some companies are still digging for gold, despite an official ban.

The previous government built two new villages in Waingmaw Township, east of Myitkyina, for those 3,000 people who were relocated from over 20 villages. They had no choice but to start new yet difficult lives with the small houses given by the government—and without proper compensation. In some cases, locals were even coerced by authorities to move.

Lu Ra, a villager from Tang Phare village who is now living in the newly constructed Aungmyintha village, said: “We didn’t want to move, and we decided to stay, no matter what came. But police and Chinese men came and said that even if we didn’t move, we wouldn’t be allowed to live in the village, and that we wouldn’t be given a new place. I have children and a family, [so] I agreed to move.”

Some Tang Phare villagers, because they could not immediately find a source of income in the resettlement area, continued to grow crops on their farms in their old village. But they were quickly arrested, though the authorities later released them.

Locals who have been affected by the dam said that they voted for the National League for Democracy (NLD) in the November 2015 general election because they believe that the party will listen to their voices and ultimately terminate the project. The party went on to win in a landslide. 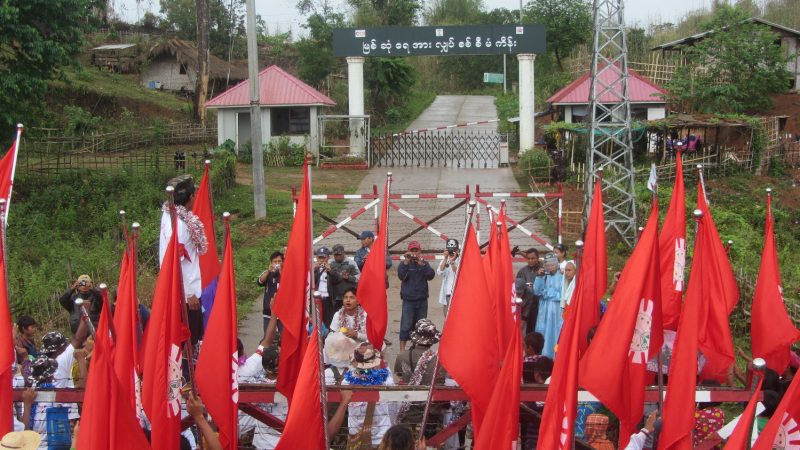 Locals staging a demonstration against the dam in 2015.(Photos: Nan Lwin Hnin Pwint / The Irrawaddy)

“If the dam breaks, it will sweep away the people to the south of it [downstream of the Irrawaddy River]. This isn’t a wild guess, but an actual possibility,” said Dr. Manam Tu Ja, chairman of the Kachin State Democracy Party (KSDP).

Ethnic Kachin oppose the dam not only because it puts lives at risk, but also because it endangers the historically valuable Irrawaddy River, the KSDP chairman said.

“Weighing the pros and cons, the dam has more disadvantages than advantages. That’s why we’re calling for its termination. Even President U Thein Sein’s government listened to the wishes of the people; the new government shouldn’t continue it,” he added, saying that the NLD government should take decisive steps toward terminating the project.

In March, China’s Vice Foreign Minister Liu Zhenmin told the Chinese media that the Myitsone Dam deal is still in force, and that the project is crucial for China. China is upset that the project has been suspended and has urged for its continuation.

The statement only mentioned cooperation in vague terms regarding the economy, trade, agriculture, water resources, and power generation; it did not touch on the Myitsone Dam.

However, Daw Aung San Suu Kyi told Chinese Premier Li Keqiang that she would like to work out a solution to the project that is acceptable to both sides without negatively affecting their mutual interests.

A 20-member commission was formed by presidential order in August, ahead of Daw Aung San Suu Kyi’s visit to Beijing, to review proposed hydropower projects on the Irrawaddy River, assessing the potential benefit to Burmese citizens and making recommendations on whether they should proceed. The first report is due by November 11.

Promising to listen to locals, the commission conducted a field survey in September.

The Irrawaddy made phone calls for three consecutive days to Kachin State Chief Minister Dr. Khet Aung, who is a member of the commission, to ask about the body’s findings but was unable to obtain comment.

Dr. Manam Tu Ja of the KSDP said the commission should take the people’s opinions into serious consideration.

While conducting the survey, however, commission members only met with a few locals and failed to meet most of the ethnic Kachin displaced by the dam project, said La Awng of Hkan Bu village.

Mung Ra, Lu Ra, and La Awng were among those who voted for the NLD, believing that it would not ignore their wishes. But now they are not so sure.

“We’d like to tell [NLD] lawmakers what we face on the ground. But they no longer come to us,” said Mung Ra.

Lu Ra said that she, along with her fellow villagers, had asked to meet Kachin State’s chief minister in September to talk about the dam project—but he refused their request, saying that he had no time.

Looking to the future, La Awng called the project “a big weapon that threatens locals every day.”