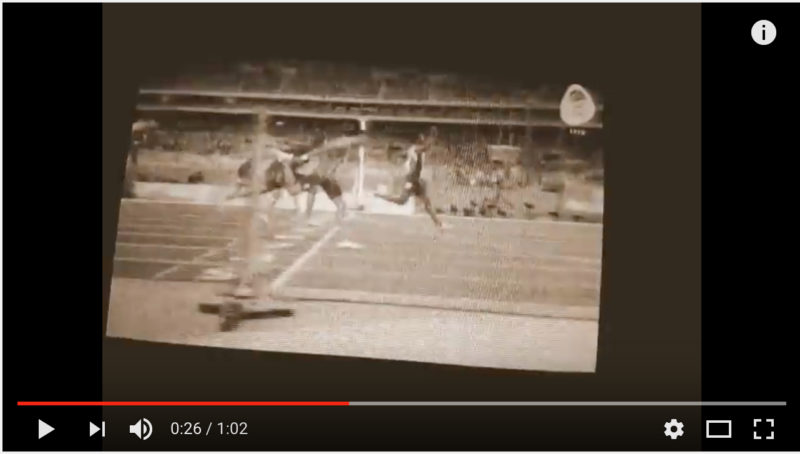 Jamaicans love the track and field portion of the Olympics; it's a “feel good” mood all round. Yet, an offensive one-word tweet threatened to derail Jamaicans’ joy over one of their medal-winning track athletes, raising issues about the appropriate use of social media by corporate entities.

IF YOU COULD CAPTION TOMORROW's @JamaicaGleaner front page of Omar Mcleod what would it read? #RioGoldRush #JAinRio

Of the many smart and witty headline suggestions on Twitter, one single-word response — “goldfish” — struck a sour note. “Fish” is a derogatory term for a gay man; to make matters worse, it was sent from the account of a local manufacturing and distribution firm.

The reaction from Jamaicans on Twitter and Facebook was immediate and condemnatory, and the company, Lasco Distributors Limited, issued an appropriate retraction soon after on its Facebook page. In it, they announced the employee behind the tweet had been fired:

Dear All:
Earlier this evening an unauthorized and offensive tweet was posted via our company account.
We wish to sincerely apologize to our fans, friends, customers, consumers, partners, Jamaicans and everyone for this terrible act. Most importantly, we issue our sincerest apologies to Mr. Omar McLeod.
The LASCO Affiliated Companies are also offended by such utterances which are a clear breach of our own values. Consequently, we have removed the tweet and deactivated the account. Further, we have terminated the employee who posted the tweet as this action was a violation of our code of conduct.
We, at LASCO, have the utmost respect for the remarkable achievement of Omar McLeod. We congratulate him on his gold medal victory in the Men’s 110 M Hurdles Olympic Event. We deeply regret any embarrassment or displeasure caused by the post and again offer our sincerest apologies.
Humbly,
LASCO Distributors Limited 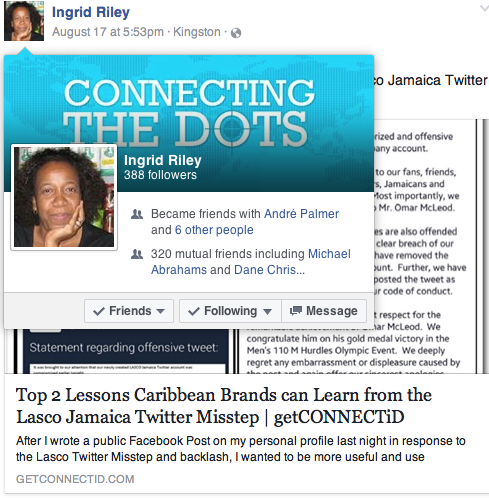 Screen shot taken from Ingrid Riley's commentary on the issue.

After her initial angry response on Facebook, digital strategist and blogger Ingrid Riley shared her blog post about the issue, noting that it was a “teachable moment” for companies on social media. She recommended that companies educate their management so that they understand how social media can (or cannot) work for them, and that social media policies should be updated and circulated:

Social media has irrevocably changed the way we do business, offering us a new model to engage with customers, colleagues, and the world at large. This kind of interaction, helps all businesses to build stronger, more successful customer relationships, that inevitably lead to business growth. It is not a fad of the youth, it is a legitimate, profit generating strategy for your Caribbean business. […]

Further consider this, Lasco Jamaica is a publicly traded company, it has shareholders to answer to and it is in the middle of expanding, so this was NOT a great thing to happen at this time. It literally could have cost them way more brand equity and real loss of dollars. So, it was good for them to have moved so quickly. I would [love] to see them take it further, by embracing Omar McLeod in a special way only the Lasco brand would.

Social media expert and journalist Ross Sheil noted in his blog that local companies have not taken the responsibility of social media seriously enough:

First Lasco’s Twitter account last night sent a homophobic tweet directed at Olympic gold medallist Omar McLeod. Second they claimed the account had been hacked. Third, amid a firestorm of social media backlash, they sent another apology […] this time acknowledging and sacking the employee responsible. Their chairman Lascelles Chin then appeared on radio this morning to apologise further.

From my experience (and yes mistakes) working for, consulting and training Jamaican companies I’m only surprised something this ‘OH SHIT!’ never happened sooner. Surprised because few companies have taken digital seriously to prevent such a thing happening.

Another point about training: diversity. I was proud to have played a role in founding Respect Jamaica and in doing so had to recognise that we still have a long way to go in our workplaces in recognising ALL forms of discrimination. It was great to see so many corporates sign up to support the programme but reality is that within local companies discrimination and harassment too often gets whitewashed.

(Read more about the kind of work Respect Jamaica does here.)

I encourage all J'cans to celebrate our athletes who make us proud with their accomplishments. Let us unite to reject hate & bigotry. #OneJa

On Tuesday night, Omar McCleod created a bit of history of his own by becoming the first Jamaican man to win an Olympic sprint hurdles title. […]

Omar McLeod is an outstanding young man. A talented athlete and a good student, and did you hear his articulate post-race interview and see how engaging he was? But apparently, for some of us that is not enough.

Because of his mannerisms some people have categorised him as someone that makes Jamaicans extremely uncomfortable. That I feel was what made someone send out a most unfortunate tweet that subsequently cost them their job. And rightly so.

I can never wrap my mind around why in someone's moment of glory while representing his or her country, should we try to tear them down because we believe they are different from we are. And belief is all it is. […] And whether or not those among us who feel that he is the way they feel about him is actually true, so what?

The ‪#‎Goldfish‬ tweet reveals more than just a casual acquaintance with bigotry; it also demonstrates how differently the society will respond when the prejudice is directed towards a person they hold in high esteem, against another who is not so lucky to be considered.

Jamaicans ended the Olympics on a high note, however, celebrating McLeod's sunny personality, his cry of “Thank you Jesus!” as he crossed the finish line, and his heartfelt singing of the national anthem on the podium:

Omar McLeod just sang the national anthem putting in an appropriate BOOM while standing on the podium. Big up yu a real yute #Rio2016