Will Trinidad & Tobago Students Be Last Out of the Gate if the Government Stops Funding Tertiary Education? 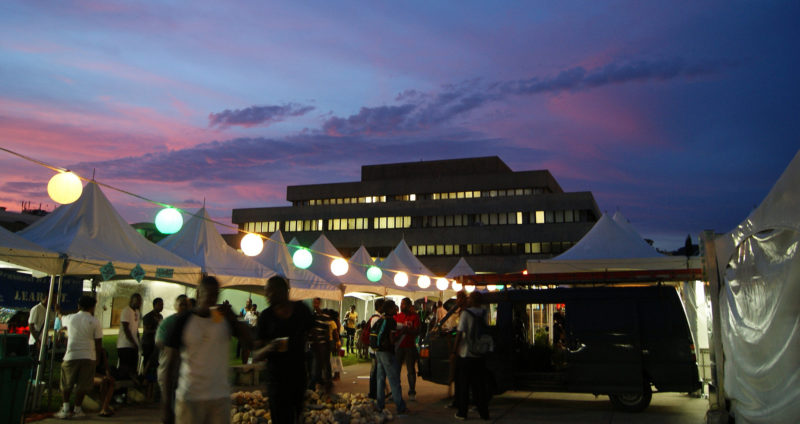 In 1962, on the eve of Trinidad and Tobago's independence from Great Britain, the twin island republic's first prime minister, Eric Williams, reminded the nation's youth that they “carry the future of Trinidad and Tobago in [their] school bags.” In the 1970s, when the country's economy was booming thanks to the oil revenues it enjoyed in the midst of the global energy crisis, Williams’ party, the People's National Movement (PNM) (which is now in power), introduced free tertiary education. The programme was discontinued by the following decade, but it's since had several reincarnations.

There was the “Dollar for Dollar” education plan, launched under the United National Congress (UNC) administration (which is now out of power), through which the government promised to pay half the fees for new enrollment at tertiary institutions. Then the PNM replaced it with the Government Assistance for Tertiary Education (GATE) programme. The 50-percent funding was still there, and the breadth of the programme was expanded to include privately funded, tertiary-level approved institutions. By 2006, the government agreed to pay 100 percent of university tuition fees for citizens.

Now, as Trinidad and Tobago finds its economy contracting, a public debate rages about the merits of “free” tertiary education as another PNM administration considers whether or not to do away with the GATE programme. Meanwhile, a Cabinet Task Force charged with finding ways to reduce the cost of GATE presented its finding this month, and the minister of education has admitted that insufficient data about the programme is raising questions as to whether or not it has been aiding economic development.

There are compelling cases for and against the programme. For several years now, Dr. Roger Hosein, an economist at the St. Augustine campus of the University of the West Indies, has recommended doing away with GATE — or at least restructuring the funding model — calling it a “manifestation of the resource-curse problem at work.” In his view, the state is educating citizens who can afford to pay and poorer students are suffering as a result.

Anthony Wilson, a business journalist, has challenged this view, writing in 2012:

By that logic, there should be discriminatory pricing of all of the goods and services provided by the State such as water, electricity, healthcare, primary education and secondary education. […] The universal funding of tertiary-level education by the State must be seen, not as a subsidy, but as an investment of taxpayers’ dollars in the development of the country’s human resource capital.

Meanwhile, the country's opposition leader has said that she is “deeply concerned” about some of the Task Force's recommendations, which include a proposal that university students should pay one third of their fees (which students have said they can't afford) and that the state should stop all postgraduate assistance. Other experts are suggesting that cutbacks will help to prevent a “brain drain” on the country.

Social media users have been very outspoken about the issue. On Facebook, Rhoda Bharath wrote:

I'm watching the GATE argument unfold.
I have one thing to add….economy in recession.
In short, how will we pay for it? What we cutting to fund GATE? Where are we finding 650m?
Once all yuh could answer that, I willing to listen.

In a follow-up status update, she asked:

Am I the only person remembering Dollar 4 Dollar? When the State paid 50% of a student's tuition fee?
How is offering to pay 66% during a recession a bad thing?
*waits on arguments equating the cost of a state funeral with GATE*

A lecturer at the University of the West Indies, one of the tertiary institutions that GATE covers, Bharath has an intimate understanding of the process, which she shared in this post:

The UWI works under the credit system.
Caricom students pay subsidised fees as a result of an arrangement between the countries who all contribute to the upkeep of the UWI.
The non-subsidized fees represent the full economic cost of a degree (100%) and go as follows:
Food and Agriculture US$ 290.00 per credit.
Science and Technology US$ 290.00 per credit.
Humanities & Education US$335 per credit.
Social Sciences US$335 per credit.
Engineering US$ 410 per credit.
Law US$ 310 per credit.
A full degree is 90 credits.
The full economic cost of tuition for an undergraduate degree in any of these listed faculties ranges from US$26,100.00 to US$36,900.
Or if I converted it to TT at an exchange rate of TT$ 6.25 to US$1.00 (hahahahahah):
TT$163,125.00 – TT$230,625.00.
That's what it actually costs the government to educate each UWI student. Depending on their degree option of course.
Know what the actual tuition fees charged are for the various faculties per annum?
Food and Agriculture TT$12,600.00
Science and Technology TT$12,600.00
Humanities&Education TT$12,000.00
Social Sciences TT$12,000.00
Engineering TT$18,000.00
Law TT$13,500.00
Now consider that in the midst of a recession the state is asking you to shoulder 1/3rd of the last set of fees I posted here.
‪#‎Spreadsheets‬
‪#‎UseDataNotEmotion‬
‪#‎GateGate‬

Patricia Worrell, who also worked at the university, noted:

I have a number of things to say on this topic, and some may seem contradictory, but they're not.
a) I agree that GATE has been abused, and it needs to be kept in some form, but seriously streamlined. Our young people MUST have opportunities for furthering their education, but if taxpayers must pay in a time of economic challenges, those opportunities must 1) be aligned to our developmental priorities 2) be provided first to those most in need 3) be treated as opportunities which, if abused, will be given to others. I saw too many instances at UWI of students who used GATE as an opportunity to sample programmes, work in a half-assed way, and leave as soon as things got too demanding, or insufficiently entertaining.

b) I think the scholarship programme needs to be scrutinized in the same way, and the demands there may need to be made more stringent as well.

c) I think the timing for doing this could have been better. You don't tell students in July that you will be making changes that may start affecting them in September. If I have to pay for my education I have to make arrangements. If my parents can't afford it, I may need to start saving – this is not enough time to do it, and it puts unnecessary stress on young people and their parents, who don't yet know where they stand.

The feeling that many students take advantage of GATE is widespread, even on Twitter:

There's now a hashtag making the rounds on Facebook — #dayswithoutgate — in which people who have been through the local tertiary education system without the financial assistance of GATE shared their memories. The underlying message is that although things were not easy, students of that era were made better by the challenges. Facebook user Keith Francis remembered quite a few high points:

Cabinet has not yet taken a decision about GATE funding, but Prime Minister Keith Rowley has said the government is “committed to maintaining the programme,” though it wants to “cut out the abuse.”