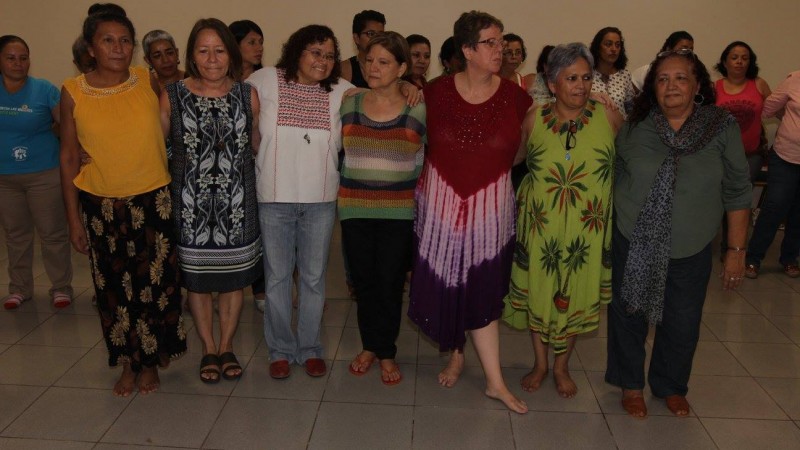 “The founders of La Corriente” attend a feminist conference organized by the group in June 2016. Photo: Facebook

Launched in the early 1990s, La Corriente has been described as “a type of Central American feminist network consisting of groups and individual activists alike.” Members dedicate themselves to education, publication, and the organization of conferences on the ways in which gender is lived within Central American societies and the ways women can collaborate together. Initially, and for a long time, La Corriente was a movement based in all of Central America, but it later shifted, focusing all its efforts on Nicaragua.

Based in Managua, this program has three areas of focus: education, research, and communication. Activists launch a new outreach campaign every year, aimed primarily at young men and women. They work mainly with issues such as sexual and reproductive rights and the secular state. They have further developed their activism with by staging events like “Las Reinas Chulas” (“The Pretty Queens”), a cabaret theater show and feminist movement that they and another organization created together. The theater has enjoyed great success, and allows La Corriente to reach out to many people at once and transmit values in a clear way. “Los Machos,” seen in the video below, is dedicated to viewing feminine and masculine conventions from a humorist perspective.

Another one of La Corriente's works is the radio show “Cuerpos Sin Vergüenzas” (“Shameless Bodies”), which is broadcast weekly on the Central American University radio network, where it addresses various topics related to sexual and reproductive rights, such as sexual diversity. The show’s objective is to influence the public opinion and create a space to exchange ideas with listeners. The shows are available as online podcasts through Ivoox. The last episode, titled “Celebramos Nuestro Orgullo” (“We Celebrate Our Pride”), was dedicated to LGBTIQ pride:

On June 28, we celebrated the lesbian-gay-bisexual-trans-intersex-queer Pride Day in Nicaragua with a national parade that started at the Colegio Teresiano [Saint Teresa High School] and ended at Metrocentro [downtown], in which various feminist and LGBTIQ groups participated as people who felt called to demand respect in a society where discrimination against sexual orientation and gender identity persists.

As a part of its activism, La Corriente defends sexual diversity and has carried out initiatives like “Revivir La Foto” (“Relive the Photo”). This series is the result of a research group called “Transitar Por el Género” (“Transiting [or Crossing] Through Gender”) focused on the binary description of gender and the examination of the so-called “dissident bodies” that challenge the social and sexual order regulated by heterosexual norms. In the video, participants are asked to take a photo from years ago and explain why it was an important event:

In the episode above, Shandi shows a photo of her high school graduation and tells how her top goals were professional training and, even more so, the development of her true identity. In the video, Shandi says she was able to attend university, but the intolerant environment there prevented her from finishing her degree.

The initiatives and projects carried out by this group can be followed in more detail on its website and social-network channels. La Corriente's most-recent activity was a regional feminist meeting at the Central American Feminist Conferences in Managua in mid-June, which you can follow on different social networks. The challenge of women in Central America, the visibility of African women, and the restrictions on abortion in the region were just some of the topics emphasized by participants.