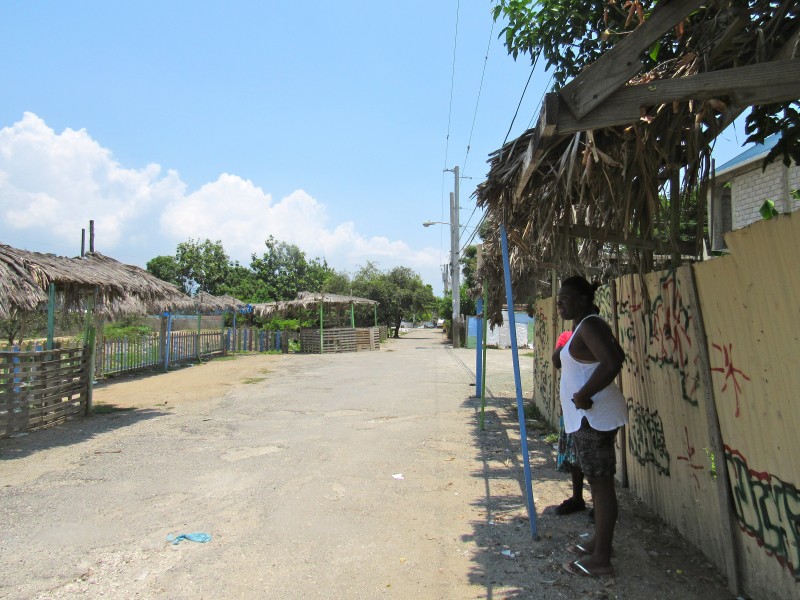 A vulnerable community in Jamaica with high unemployment and security concerns. Photo by the author, used with permission.

The recent deaths of two American missionaries in rural Jamaica and the ensuing negative media coverage in the United States have jolted Jamaicans into examining the problem of crime and violence that continues to haunt their country.

According to the United Nations Office on Drugs and Crime, the murder rate in Jamaica was 42.9 per 100,000 population in 2013 — the sixth highest in the world. The double murder reawakened the debate on capital punishment in Jamaica (hanging has not taken place on the island since 1988), but what Jamaicans were even more acutely aware of was the negative reporting from overseas press. As the country was already agonizing over the killings and their deeper implications, the local reaction to the coverage has followed a predictable pattern of hurt feelings, denial and a painful struggle with reality.

Two comments ignited something of a firestorm of commentary on social media in particular. First, Ashleigh Banfield, an anchor for the US-based news channel CNN, said on her program while reporting the case, “It's astounding to think that a lot of people think that Jamaica is a paradise but it is an extraordinarily violent country with a remarkable murder rate.”

Then well-known broadcaster and lecturer Fae Ellington tweeted, quoting the Rev. Astor Carlyle, “Jamaica has pockets of violence. We are not generally known to get up with machine guns & walk into schools& theatres & shoot up people” — a reference to the mass shootings that happen on a regular basis in the United States:

@FaeEllington This an excerpt of a Facebook post by Rev. Astor Carlyle.
His logic is unassailable. Let's put this into perspective #CNN

Journalist Earl Moxam supported this position, pointing the finger at the United States:

With guns being so easily available in America, it is no wonder that thousands of these deadly weapons are spirited out of that country into other jurisdictions which lack the capacity to detect many of them at their porous borders. That is the story of Mexico; that is the story of Jamaica. It is a story of criminal destabilization, directly fueled by the inflow of American guns. It is a tragedy for which America is not being held accountable…Yes, I do acknowledge that Jamaica has a ‘remarkable murder rate’, but perhaps because I know the lay of the land and have a better understanding of our culture than Ashleigh Banfield, I remain far more comfortable living in Jamaica than I ever would in the United States. I still do not shiver at the thought of going to a shopping mall or the cinema in Jamaica. In America, I would probably grow dizzy looking around every 30 seconds for the next potential mass killer, exercising his right to bear arms.

The response to Ellington and Moxam’s assertions was decidedly mixed, reflecting many Jamaicans’ conflicted approach. Many were perturbed by the CNN anchor's comment — including blogger and journalist Kate Chappell — who commented:

Not everyone agreed that Jamaica’s reputation is being unfairly besmirched. Social worker and activist Damien Williams blogged:

These pockets of violence that Ms. Ellington refers to are not as insignificant as we think and perhaps we have not begun to uncover the various forms of violence that are expressed in our society through road rage; domestic violence; turf war; sexual violence […] abuse of children (often disguised as discipline); economic violence (systems of inequity); the cruel and hurtful things we say to each other and a host of other ways we are violent to each other. Violence is pervasive. What we do have pockets of is privilege – a sort of privilege that insulates us from the harsh realities that the majority of Jamaicans face because they have no access to privilege, power, or prestige.

Following the murder of two missionaries in Jamaica, social media erupted, mostly with condemnation, after Ashleigh Banfield, CNN Anchor, dared to call us an extremely violent country! How could this American who knows nothing of our struggles and our reasons for being murderous call us a violent nation! I too raised eyebrows and I fumed at 75 degrees for just 3 minutes because before I got to boiling point, I realized something — she said nothing wrong, the statement could not be more truthful, Ashleigh Banfield was right! We are an extremely violent country. And no comparison with mass killings in the United States or Pakistan or Afghanistan or West Bank will change that fact. We are very violent as a country and the value of life has been diminished. How is our target for murders every year ‘below 1000'? It should be below 100! It should be below 50!

Surely the lack of fear you feel in Jamaica is connected to the fact that you belong to a class of people rarely troubled by police or murderers. As Cultural Nationalist #1 had observed, there are “pockets” of violence here, and, it’s necessary to add, the literati and glitterati are insulated from it. But ask anyone living in those pockets whether they agreed with the American anchor’s statement, and what do you think they’d say? […] We prefer to think of ourselves as highly cultured, civilised, law-abiding, English-speaking citizens who do not curse or act violent. This is the image we want to project; let no foreign anchor tell you otherwise. The level of denial and self-delusion is all-pervasive. […] I do wish, though, that the cultural nationalists were as zealous about eradicating the conditions that provoke violence in Jamaica as they are about protecting its image.

Damien Williams confirmed that violence is an everyday reality in the vulnerable communities where he works, tweeting:

@Petchary @dmarcanthony @anniepaul the communities I serve do believe Jamaica is violent. Yesterday there was a shootout. Marooned.

So where are the solutions? One Jamaican columnist suggested a version of the broken windows theory, which basically states that preventing petty crimes can send the message that even minor infractions will not be tolerated, thereby acting as a deterrent for more serious crimes. Another suggested using the missionaries’ murders as “a watershed moment to after criminality”.

Despite all this, Jamaicans still know how to “tek serious ting mek laugh” — in other words, to find something humorous even in the grimmest of situations. After the police found a stash of guns in a troubled neighborhood near Spanish Town, this Twitter user tweeted:

Meanwhile, the police, although aided by the FBI, still have no suspects nor have they identified a motive for the two murders — perhaps an example of the need for better policing before the reinstatement of capital punishment can even be considered. Jamaica continues its soul-searching.