Is the Level of Vitriol Against Cricketer Chris Gayle Justified? 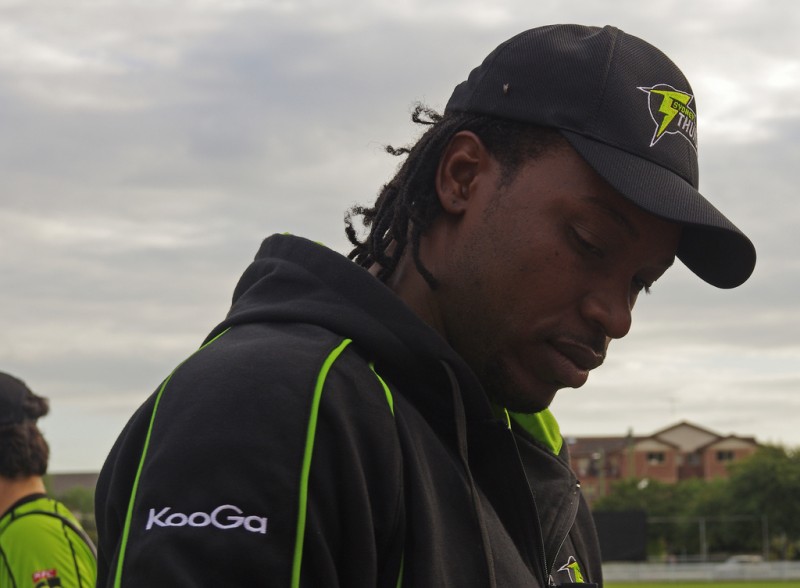 The on-camera pass that West Indian cricketer Chris Gayle made at Australian sports reporter Melanie McLaughlin at the beginning of January still has a lot of traction in the Caribbean, sparking online discussions about sexism, sexual harassment and women's rights.

Now Jamaican bloggers are taking a closer look at the behaviour of their home-grown cricketer, with some questioning the level of outrage against Gayle and others framing the issue as being representative of Jamaican culture.

McLaughlin had asked Gayle, who plays for the Melbourne Renegades, about his approach to the innings in a match he had just played against the Hobart Hurricanes, but she got this reply instead:

RPJS, writing for Raw Politics…Yaadie-style blog, suggested that bad behaviour was the problem:

It is about Gayle announcing his intentions towards the women in question, in what might be considered as an aggressively sexual way, that is neither flattering nor invited. […]

[Gayle] felt that […] this was entirely within the remit of appropriateness and never appeared concerned either about the timing or the place of his remarks. […]

But Annie Paul, who blogs at Active Voice, had a different take on the matter, making the point that the way the clip was edited contributed to the degree of backlash against Gayle:

I thought from viewing the clip that Gayle had countered the reporter’s question with his flirtatious comments, refusing to stick to the subject of the game or even answer questions about it. But why did it start so abruptly I kept wondering. Why did her question seem truncated? […] Shouldn’t we examine what was said immediately before and after the edited clip before deciding Gayle’s behaviour is/was beyond the pale?

So she did, posting a video of the full interview and saying:

When you look at it you find that McLaughlin had already asked a couple of questions about the game, received appropriate answers from Gayle, and that it was towards the tail end of the brief q and a that Gayle slipped in his less than stellar advance to the reporter.

Somehow this casts a different light on the whole matter for me. Gayle’s comments were clearly inappropriate and deserve criticism but the kind of vituperative condemnation and hate that’s been directed at him and the amount of outrage the matter has generated seems like overkill.

Paul went on to call out the “selective outrage” from people like former Australian captain Ian Chappell, who demanded that “a zero-tolerance message” be sent immediately:

Well blow me down under! Is this the same skipper who, with his brother, presided over the blatant racism of Aussie cricket in the 70s with its notorious ‘sledging’ or what has been called ‘the dark art of verbal abuse in sport'? Where was his no tolerance policy then? Actually mate? Your track record doesn’t warrant the high horse you’ve chosen to ride against Gayle.

She also criticised Australian sports columnist Malcolm Knox for a reaction piece he penned in “atrociously articulated” Jamaican Patwa, the English-based creole language spoken in Jamaica, attempting to “racesplain” (explaining racist behaviour in an attempt to justify racism) to Gayle. She pointed to a tweet by screenwriter Peter Mattessi that summed up her feelings on the matter:

Still can't get over that Malcolm Knox piece. The written equivalent of wearing blackface and dancing while singing Island In The Sun.

Raw Politics, however, was not letting go of the Gayle issue so easily, instead making the connection between the cricketer's awkward display and the “culture of excess” in which the blogger claims, linking to an Al Jazeera article, that “at least forty percent of underage girls and, in many cases boys, are violently initiated into sex in Jamaica“:

In this culture and society where all kinds of premiums are placed on a certain representation of masculinity, women and girls, especially, are forced to deal with men and their aggressive displays of sexuality at all times and in various ways, regardless of the consequences.

The blogger suggested that this “culture” may be “rooted in a history of subjection on the plantation” and even called Jamaica's dancehall music into question, saying:

Dancehall and other popular expressions of culture in Jamaica are replete with the ideas of uncontrollable, violent and, oddly enough, desirable masculinities. […]

These are routinely paraded as a form of ideal to which boys are to aspire and to which women are expected to acquiesce, without complaint. […]

We may want to rethink this ‘Jamaican culture’ brand that has been tagged to Gayle’s clearly out-of-line and out-of-place remarks and consider, for a moment, how we have blithely ignored various forms of sexual harassment, almost as if it were a standard part of male-female relations, in the public domain.

Annie Paul was not in disagreement over the sexism aspect of the issue, saying:

The problem for us in the Caribbean is not Chris Gayle and his outlook per se. It’s the casual sexism of Caribbean masculinity in general that really needs taking in hand. […]

On the eve of the enactment of a sexual harrassment bill in Jamaica an alarmingly high number of men here, journalists, men on the street, university lecturers and others, have chosen to ignore this view completely and insist on discussing the matter as if men have the right to flirt with women they’re attracted to whenever the urge takes them. This is problematic.

The online discussion as to whether Gayle should be made the whipping boy for the region's all-too-common display of sexism — and its ideas about masculinity — will no doubt continue.