Could Cricketer Chris Gayle's Gaffe Inspire Caribbean Men to ‘Man Up and Know How to Behave'? 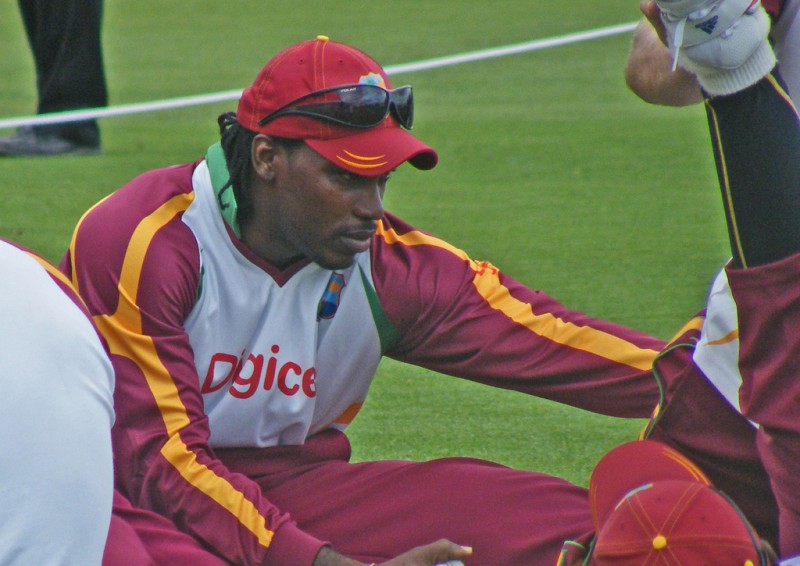 Chris Gayle at the Prime Ministers 11 Cricket match in Canberra 2010. Photo by NAPARAZZI, used under a CC BY-SA 2.0 license.

The backlash against West Indies cricketer Chris Gayle's remarks to Australian sports reporter Melanie McLaughlin is growing. Not only was Gayle fined by his team for hitting on McLaughlin during a post-match interview, it now seems as if his cricketing career down under may be over.

Caribbean netizens stand divided on the issue, with some saying that “he should pay for his stupidity and arrogance” and others of the firm view that Gayle is being victimised because of his race. If anything good has come out of the controversy, it is that Gayle's gaffe has sparked a public discussion about sexism in the region.

On the upside, @henrygayle has brought out the feminist in a lot of people who didn't know/like/get the idea before

McLaughlin had asked Gayle, who plays for the Melbourne Renegades, in an on-camera interview about his approach to the innings in the match against the Hobart Hurricanes, but his reply left her looking rather uncomfortable:

‘All this signals sexual harassment unrecognized’

Even the editorial of January 6 in the Jamaica Gleaner (Gayle is Jamaican) called out his behaviour, saying that it “represents egomaniacal contempt for women that is an embarrassment to Jamaica's sporting fraternity and the country at large.” The article went on to call for “legislation in Jamaica to protect both men and women from sexual harassment”, noting that “already, critics inside and outside Parliament are bristling at any attempt to stifle what they believe is a subcultural norm — and that a little sweet talk is harmless.”

To feminist blogger and university lecturer Gabrielle Hosein, the issue was clearly one of sexual harassment. She explained:

There are many reasons why people don’t understand what sexual harassment looks like. First is widespread confusion about the difference between seduction and coercion, the old ‘she’s saying no but she really likes it’ interpretation.

Second is that we live in a world where women’s consent to men’s sexual advances is less important than men’s freedom to make those advances when, where and how they choose. […]

Third, the workplace, like most of the public sphere remains a masculine one where women may be talked to and about in sexualized ways even when their work has nothing to do with their vagina. It’s dehumanizing, meaning it reduces humans, in this case women, to their sexual value. It’s unprofessional, meaning it trivializes their status and identity as workers while they are on the job.

Honing in on the exchange between Gayle and McLaughlin, and lamenting a missed opportunity by Gayle to be an example to men of the region, Hosein continued:

Though McLaughlin was reported to have told her boss she was uncomfortable, Gayle felt it was his right to decide that ‘no harm was done’. All this signals sexual harassment unrecognized. […]

Gayle was unapologetically apologetic, missing an opening to score as a regional icon by acknowledging his step out of crease. He lost an opportunity to send a message to Caribbean boys following his stardom that big men have a role in stopping sexual harassment, even as they come to understand it better, sometimes in difficult ways. He dropped the ball when he could have shown an example of ideal manhood as more than hyper-sexuality, as also self-reflection and responsibility.

Fellow Trinidadian blogger Brendon O'Brien admonished Gayle to “bat in his crease” (in cricket, batting out of the crease — the white line on the pitch behind which the batsmen stand — has attendant risks), maintaining that the reason sexism is not named in the region is because it is ingrained into Caribbean culture:

Chris Gayle’s interview with Mel McLaughlin reeks of sexism. The reason some folks don’t smell it, though, it because they’re used to the smell, and they’ve been led to think it’s a good scent.

O'Brien also addressed Gayle's “alleged habit of harassing women in any field“, suggesting that it “reveals a bigger problem”:

It’s rooted in men’s socialized understanding of women as sexualized bodies first and competent workers (or even whole human beings) second […] fed by expectations of men as sexual hunters […] justified by the notion that all men do this to women – interrupt their days with attempts to flirt – and that it’s either benign or benevolent.

In this particular context, it’s further justified by the idea that Caribbean culture is more easy-going and flirtatious than others […]

‘We all know the tone Gayle used, we from the Caribbean’

Another Trinidadian blogger, Amilcar Sanatan, took a tongue-in-cheek approach to the whole affair:

No one really reads about the growing field of sexism in sports journalism. No one really wants to address the sexualising of women in public, persistent undermining of their jobs, objectifying of their bodies and undervaluing of their contributions.

Dem people not from the Caribbean!

We do not talk truthfully among ourselves about the line between complimenting and harassment. Wearing make up, looking pretty and being in the presence of a celebrity is enough to be denied your dignity. Verbal innuendo and unwanted remarks are part of the culture we do not want to get rid of.

A public Facebook status update by artist and musician Muhammad Muwakil also helped put the situation in perspective. Muwakil suggested that race was a factor in the outcry:

Every black man by necessity needs be a diplomat, you can cry about it and say the world is unfair and white men can do what they want why can't I? Man up and realize that we are in a war for ourselves and you need to watch your behavior and not get comfortable. You in the house yea but don't for a second think you so good with them that you can kick up your boots on the couch.

However, Muwakil also said that Gayle's behaviour was unseemly, raising a very interesting point about his tone, an all too familiar one in the Caribbean:

I find we not being real about it, we all know the tone Gayle used, we from the Caribbean, those of us who don't use the tone hate this tone, it is the tone of your bredren [friend] who hits on the waitress in Ruby Tuesday's for the entire course of her service, the tone of the brother next to you on the maxi [a type of taxi] boiling off the ears of a clearly uncomfortable smallie [slim girl] next to him, this tone has been making decent ppl cringe for as long as there has been decency. […]

We all know what the world gives and even when it changes one day, sitting on a bench around the savannah cat calling women will always make me sick, white black or otherwise, man up and know how to behave.