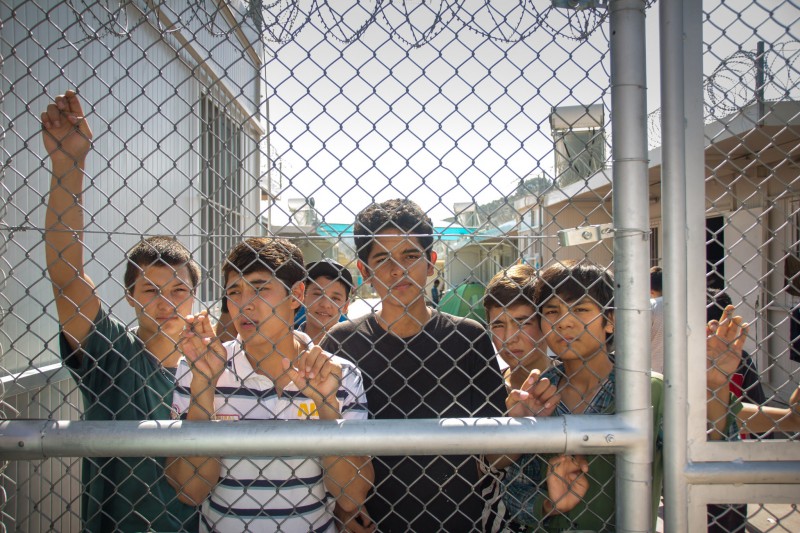 Greece: Lesbos, 2015. The migrants at Moria Identification Centre, who come from Afghanistan, Pakistan, Eritrea and many other countries, are detained by the police. Photo by International Federation of Red Cross and Red Crescent Societies, used under a CC BY-NC-ND 2.0 license.

Europe is considered by many as a region offering security and ample opportunities — but this view may be changing, as the recent refugee crisis (the worst since World War II) and the increasing threat of terrorism has led several European countries to deport some migrants.

Greece, which has recorded the highest migration numbers, recently deported 49 people to Pakistan, but the situation took a rather surprising turn when the airplane transporting them landed at Islamabad Airport. Only 19 out of the 49 allegedly undocumented migrants were allowed to enter Pakistan; the authorities refused to take in the remaining 30, who could not prove their Pakistani nationality. Pakistan later turned back the Greek chartered plane with the 30 passengers — deportees sent from Greece, Bulgaria and Austria — who now remain stateless.

JUST IN: #Pakistan refusing to allow 30 migrants deported from #Greece to disembark from plane in #Islamabad pic.twitter.com/Wgmd3WQ6IJ

Pakistan’s refusal to accept the migrants impelled the ambassadors of the three countries to rush to the Islamabad airport to try and convince immigration authorities to take the remaining people into custody, but their efforts were in vain. Nineteen people, from the provinces of Gujrat, Mandi Bahauddin, Dera Ghazi Khan and Dera Ismail Khan, who were accepted in were shifted for detention.

According to Interior Minister Chaudhry Nisar Ali Khan, the Greek government had deported the immigrants to Pakistan without providing satisfactory proof of their nationality. The ministry further issued a statement saying that illegal deportees without proper documentation will be sent back. Describing the migrants as “unverified deportees”, Pakistan's position is that the European Union (EU) has violated Pakistani laws subsequent to the settlement between EU and Pakistan relating to undocumented migrants and their deportation.

Wow ch nisar ali khan rocks first time in pakistan's history he have send back a Greece jet with 30 pakistani deported citizens . Greece send them back without conformation from pakistani consulate.

We won't let the world to treat us like a trash can! Pakistan sends deported migrants back to Greece.

Pakistan refuses to allow 30 migrants deported from Greece to disembark from a plane. Man of his word ‘Interior Minister’.

Pakistan stiffened its policy on readmitting migrants in November 2015 after a meeting between EU Commissioner and Minister Nisar to settle a dispute over forced deportations to Pakistan. Nisar had earlier said that two EU states were sending Pakistanis home on “baseless terrorism charges”.
Last month, the EU agreed to address Pakistan’s concerns, which led to the suspension of the Pakistan-EU readmission agreement on migrants. While the EU Commissioner said that deportees from Europe would now be sent to Pakistan under a clearly defined standard operating procedure, Minister Nisar stressed that under the agreement, Pakistan will not allow any plane carrying deportees to land, “unless we verify their nationality and get details about the charge and evidence against them.”

Globally, as many as 90,000 people were deported back to Pakistan last year for a variety of reasons, including some who had been sent back without proper proof that they were Pakistan nationals, according to an interior ministry spokesman. About 50,000 Pakistanis travel legally to Europe for work each year — but close to 21,000 Pakistanis who were in Europe without permission were ordered to return home in 2014.

Greece insists that all the passengers on that airplane were Pakistanis. A Greek police official said that “action will be taken” when the migrants returned to Greece, but he did not elaborate. Yiannis Mouzalas, the Greek migration minister, said it was the responsibility of the European Union to intervene.
Overwhelmed by the scale of the migrant crisis, Greece has toughened its laws and border security and laws, but with over 700,000 people arriving on its shores since January 2015, it is still the most popular entry point for asylum seekers in Europe.

A Moroccan man recently died on the Greek-Macedonian border during clashes between police and migrants who were stranded for weeks. The man was among some 3,000 people, mostly from Morocco, Pakistan and Iran, stranded near the Greek town of Idomeni, since Macedonia began limiting entry to refugees from Syria, Iraq and Afghanistan. His death, the first on the land border between Greece and Macedonia, has prompted Greece to protect migrants — Mouzalas recently said the country would take steps to address the worsening situation.

Europe has seen a constant increase in number of refugees fleeing Middle Eastern wars or turmoil in other countries. More than 900,000 refugees and migrants have arrived in Europe this year alone, according to the latest report by the International Organization for Migration (IOM). Greece recorded the highest migration inflows in 2015 with approximately 751,873 arrivals by sea — which means around 7,000 refugees and migrants arrive on Greek soil every day.