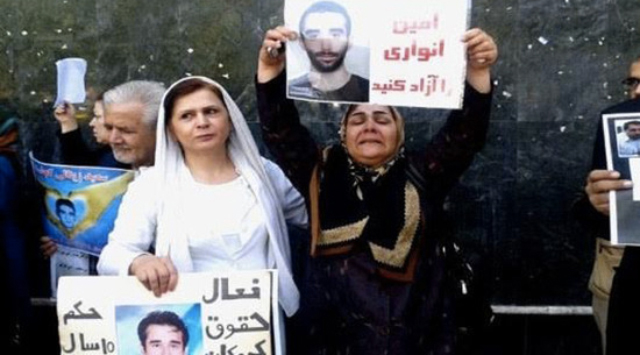 Amin Anvary's mother Farah Bakhshi in a protest for her son's release. Image from ICHRI.

Student activist Amin Anvari, 21, who received a suspended prison sentence earlier this year for Facebook postings promoting basic civil liberties, has been arrested and held without charge at Evin Prison’s Ward 2-A by Iran’s Revolutionary Guards since 4 October, 2015. According to a family member, he has been under intense pressure to make false confessions.

“They are threatening us and harassing us just to put pressure on Amin in prison. I’m sure of that. They want him to agree to confess to lies,” Amin Anvari’s mother, Farah Bakhshi, told the International Campaign for Human Rights in Iran.

Amin Anvari was first arrested on 30 December, 2014, because of his Facebook posts on basic civil rights. He was released the same day on a 300 million-rial (approximately USD $10,000) bond. In July 2015, he was tried at Branch 26 of the Islamic Revolutionary Court presided by Judge Ahmadzadeh and sentenced to two and a half years in prison for “propaganda against the state,” “insulting the Supreme Leader,” and “insulting Mohammad Taghi Mesbagh Yazdi”, who is a member of the Council of Experts. But his sentence was suspended for five years.

Ms. Bakhshi recalled that her son Amin was arrested again on 4 October by ten men who stormed into their home without showing identification or warrants and confiscated his personal computers. Since then she has only been able to have three brief phone conversations with him. She, her husband, and her younger son have been harassed and warned not to give interviews about Amin’s arrest.

“Anything that happens to my two children, myself and my husband will be the responsibility of the Revolutionary Guards. They are threatening us so that I don’t protest or give interviews. But I have no other choice. You want me not to give interviews? For God’s sake release my son and then I’ll be quiet,” Ms. Bakhshi said.

Ms. Bakhshi relayed to the Campaign how an official at Evin Prison tried to pressure her not to speak with media:

He told me he would let me see my son if I promised not to give interviews or join protests. I said I would agree, if he promised to release my son. He said no, and I said ‘well, then I will continue to do what I’m doing.’

Amin Anvari’s mother added that she was silent for two weeks after her son’s arrest. But on 19 October, she joined a protest gathering by a group of prisoners’ families. “That same day Amin phoned our home and spoke to his father and said he was well and said ‘Tell mother not to give interviews because it will cause problems [in the case]’.”

Ms. Bakhshi said during this summer’s annual family visit to Turkey they discovered that some of Amin’s friends had been arrested. She told him not to return to Iran if he thought there might be a problem. But he said he had done nothing wrong and wanted to return to his university studies, Ms. Bakhshi added.

“My plea to the judicial officials is that they should not arrest youths and pass heavy judgments against them every time they criticize. My son should be sitting in class and studying right now.”