Lebanon: Pains and the Arab Summit 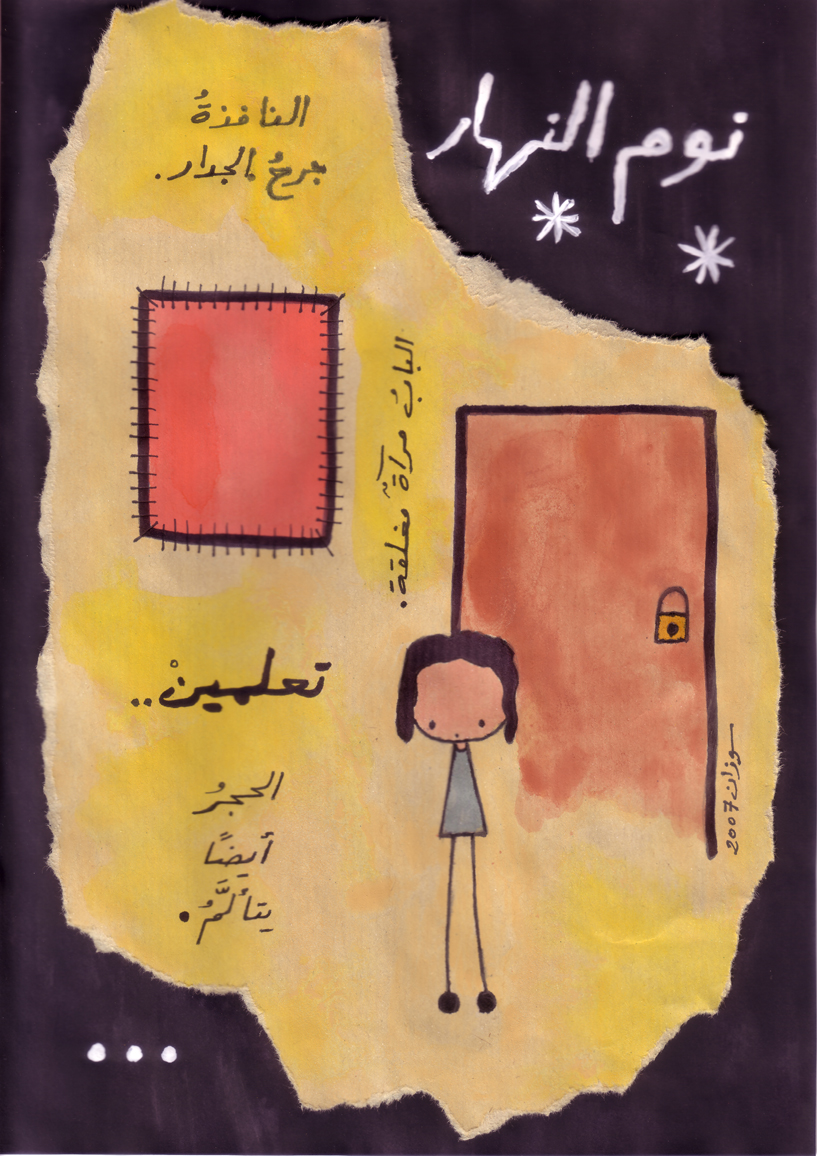 This week is about posts expressing pain; pain due to sexual harassment; insecurity and the consequences of war; and because of the political uncertainty that the Arab Summit did little to alleviate. There is also a book review and a computer graphic tutorial.

“The window is the wound of the wall. The door is a closed mirror. You know, bricks also feel pain.” These brilliant metaphors written by Suzanne Alaywan are graphic in their own right nevertheless she incorporated them in one of her paintings.

The ugly and shameful act of sexual harassment that women and girls could sometimes be subjected to is the topic of this post by Sham. The personal nature of the experiences mentioned add to its already acknowledged significance:

Is this dashing Lebanese man trying to make an impression on his American date or is he really interested in learning Hebrew? Adiamondinsunlight reveals this part of a conversation she had with her date in which he expresses his love for the Hebrew language:

Mistaking my “this is definitely the worst date ever” look for one of interest, he continued:
“Hebrew is a beautiful language, Diamond.”
“Should I jump out of the car and run?” I thought.
“Is this the start to some kind of recruitment pitch? Half the people I meet think I am a spy anyway, just because I am American. NOW what will I say when people ask?”

The Arab Summit and the Nuclear Controversy

The Arab Summit in the Kingdom of Saudi Arabia and its implications was the topic of discussion by Marxist From Lebanon who sees that the situation is that of a stalemate with no chance for progress:

The Arab Summit itself is nothing but forums to read their opinions, while allies and foes in the Arab Region checked with each other in the “private rooms”. All Arab Leaders would simply hope and wish for a change. I am not talking about intention, I am talking about the speeches delivered. Probably the most repeated words were “we hope” or “we wish”. Of course, words on an empty paper are nothing.

The controversy over Iran’s nuclear program as well as the Arab Summit with the rise of ‘fabricated’ Arab Nationalism and the prospects of Arab countries getting Nuclear weapons is the subject of analysis by Angry Anarchist:

Whether or not one agrees with Iran's quest for nuclear capabilities and all that it entails in terms of strategic parity vis-a-vis Israel, one must admit that the IAEA and the international community have been hypocritical in their position on Iran — compared to their position (or rather, lack thereof) on Israel. The farthest they have gone is to call on Israel to “admit” that it possesses nuclear weapons. I mean, wouldn't it have been lovely if Iran would have faced the same amount of “pressure”, and nothing more?

Speaker of the House Pelosi is planning a visit to Lebanon on which Dr Marcy Newman commented:

Notice that she names Israelis, but no Lebanese; Lebanese somehow do not deserve names for that would humanize them. Notice her merging of US and Israel interests as if they were one. Do we really want her here in Lebanon? I would love to see and be part of a protest against her visit next week.

Dr Victorino de la Vega discusses the draft bill, in Iraq, that aims to allow former members of Saddam Hussein’s Baath Party to return to government jobs and to join the military and thus beginning the ending of the policy of de–Baathifying Iraq that began with the invasion of Iraq.

By “De-Baathifying” Iraq in the wake of the US invasion, Bremer and his Neocon handlers such as US Undersecretary of Defense Dov S. Zakheim (a dual Israeli/American citizen…and an ordained ultra-Orthodox rabbi!) knew exactly what they were doing: they were opening the Pandora box of ethnic and religious strife throughout the Gulf region, thus securing a “long term strategic edge” for the state of Israel.

Prof As’ad Abu Khalil give a review of Nicholas Blanford's book “Killing Mr. Lebanon” which he described as the tale of the kind billionaire who allowed his bodyguard to kiss his hand:

Even when Rafiq Hariri offers his hand to be kissed by his bodyguard (a well-known opportunist thug), it is portrayed by Blanford as a great act of generosity and kindness on the part of Hariri: “Hariri had sat on the sofa and raised his hand. [Yahya] Arab took it and kissed it. It was intensely personal moment.”(p. 137)

Prof As’ad also mentioned and criticized, among other things, what the book had to say about the March 14 movement which followed the assassination of Rafiq Hariri:

He cited a Lebanese man saying: “These aren't the $10 crowd. This is the bourgeoisie.” Blandford was very impressed, and he adds: “Glamorous Maronite women, wearing chic black dresses, and sporting designer sunglasses, chatted in French and held aloft pictures of Hariri” (p. 146).

Finally if you are into making your own computer graphics then Elie Khoury has a step by step illustrated lesson for you to draw a glossy black panel, using Photoshop, that you can use for your site or blog’s banner.