'More coral equals more fish...it’s amazing how much of a difference you can make' 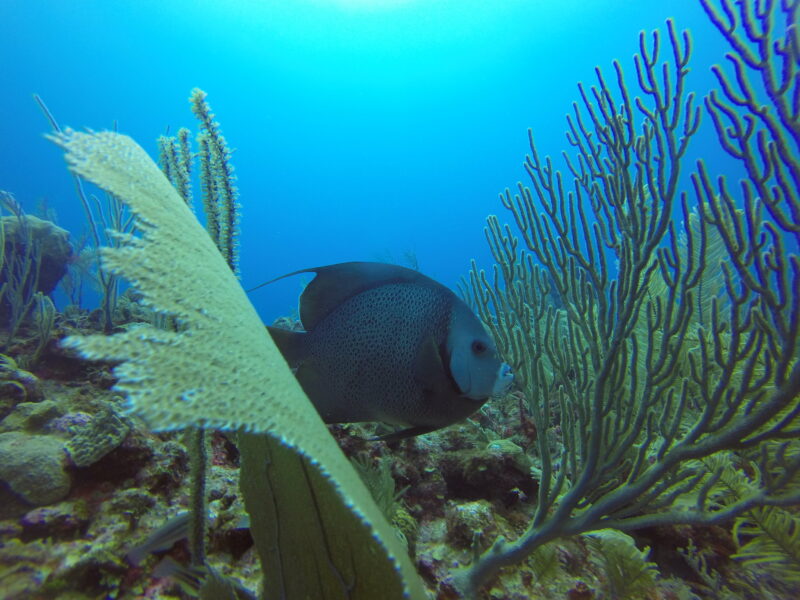 A fish darts among the coral on Belize's Barrier Reef. Photo by David Petit on Flickr (CC BY-SA 2.0)

This article, written by Carolee Chanona, was first published on Cari-Bois Environmental News Network and an edited version is republished here under a content-sharing agreement.

Science tells us that carbon sinks determine the quality of our very existence, and yet, the average Belizean might struggle to identify one. This will have to change if Belizeans want to keep telling a victorious story about the Belize Barrier Reef.

Leveraging blue carbon, held in the ocean, coastal wetlands, and seagrass beds and their sediments, which surpass the planet’s forests in the rate of sequestration, will require ambitious, conservation-forward policies to maintain and restore coastal and marine ecosystems in order to mitigate the crippling effects of the climate crisis. For such policies to be realised, however, Belizeans will need to lead the change.

The need for big ambitions

Of the Caribbean Community's (CARICOM) continental countries, Belize is in the Mesoamerica biodiversity hotspot. To protect big biodiversity, a nation like Belize also needs big ambitions, especially when it comes to tackling behemoths like the disproportionally-felt effects of environmental debts from a changing climate. There have already been innovative strides. Strategies to conserve its dazzling terrestrial and aquatic biodiversity are nothing new for Belize, which was the first to designate a Marine Protected Area (MPA) in Central America with Half Moon Caye Natural Monument in 1982 — Belize’s first protected area.

Endowed with three of the western hemisphere’s four atolls and the second-largest continuous coral reef in the world, it’s no wonder that Charles Darwin himself described the Belize Barrier Reef as “the most remarkable reef in the West Indies” more than 180 years ago. Besides the Belize Barrier Reef Reserve System’s (BBRRS) inherent beauty, coral reefs are important for Small Island Developing States (SIDS) and coastal states like Belize. Over 400 coral and mangrove islands dot the country's 240-mile coastline, some inhabited, some not. Nearly half of the country’s population lives in coastal communities, which rely on marine ecosystems for income, food, and flood protection. Tourism accounts for close to 45 percent of Belize’s economy, and a quarter of that is estimated to depend on coral reefs alone.

This is why, in December 2017, Belize became the first country to reject all offshore oil, after years-long opposition with a landmark indefinite moratorium. Belize’s blue bonds also represent the world’s largest debt restructuring for marine conservation to date, totalling a USD 364 million debt conversion that reduced the country’s debt by 12 percent of GDP, with long-term sustainable financing for conservation. In exchange, Belize committed to protecting at least 30 percent of its marine territory by 2026, an upgrade from its current 15.9 percent. It signed the swap with The Nature Conservancy (TNC) in November 2021, with an endowment fund of USD 23.5 million, effective after 2040 to finance conservation.

The weight of stewardship

Although a portion of the Belize Barrier Reef was designated a UNESCO World Heritage Site in 1996, with seven Marine Protected Areas comprising this reserve system, one section was placed on the In Danger list for almost a decade after threats of irreversible damage from negative coastal development and oil exploration, as well as the absence of a solid regulatory framework. It was only after June 2018, when the Belize government enacted regulations critical to protecting the country’s mangroves and committed to legislating the current voluntary moratorium on selling public lands within the World Heritage site, that the BBRRS was removed from this list.

On November 17, 2022, after the government confirmed intentions to conduct seismic surveys, Oceana Belize — a founding member of the Coalition to Save Our National Heritage that lobbied for the ban in the first place — began collecting signatures to trigger a national referendum to decide if the offshore oil moratorium should be lifted. Despite Belize's strides, this situation underscored the perspective that one decision could impact the country's collective future, and that people power is often the only way to hold policymakers accountable.

Lessons from the past

In 2020, ahead of TNC’s blue bonds, Belize’s public debt had reached USD 1.5 billion. There is much at stake, and the cost is Belizeans’ way of life.

The situation ultimately boils down to enforcing environmental laws, expanding protected areas and their (co)management reach, and sourcing “green” funding to ensure this. With Belize acutely exposed to rising sea levels, however, the clock is already ticking. Weakened by coastal urbanisation and economic activities, anything except climate-forward policies put Belize's coastal protection, food, recreation, and carbon sequestration at risk, with further potential jeopardisation of the resilience, adaptive capacity, and biodiversity of the Belize Barrier Reef.

In April 2020, the Statistical Institute of Belize’s (SIB) External Trade Bulletin noted that the country had earned over USD 40 million in exports of nature-based goods and services for the month, with marine products accounting for USD 1.2 million.

Seagrass beds and mangroves are usually the first ecosystems to go in the name of development, but if the environment isn't prioritised, development won’t last. As dense aerial root systems, mangroves form a strong yet permeable barrier to waves and currents, lining coastlines to protect against erosion and climate change. Per acre, mangroves store three to five times more carbon in their soil than other tropical forests. It’s estimated that half the world’s mangroves have been lost in the past 50 years, yet, according to Dr. Leandra Cho-Ricketts, a Belizean marine ecologist and co-founder of the University of Belize Environmental Research Institute (UB-ERI), Belize still retains a large proportion of its mangrove cover when compared with its regional neighbours.

Part of Dr. Cho-Ricketts’ research within the coastal resilience programme consists of quantifying the carbon value of mangroves in Belize: “As a signatory to the Paris Agreement, Belize can include the protection of mangroves in its Nationally Determined Contribution (NDC).”

Meters beyond the algae, sponges, and sea anemones that envelop mangroves’ stilt roots, however, there’s another story at hand.

A study chronicling over 20 years of change in the benthic communities across the Barrier Reef was published in January 2022, and the decline is stark: reef-building coral cover shrank from 13 percent to just 2 percent. Disease, storms, ocean warming, and pollution have caused the mass mortality of reef-building corals across the Caribbean over the last four decades, making investment in exhaustive and aggressive mitigation critical.

Fragments of Hope (FOH), a non-profit, community-based conservation model, transplanted fragments of Caribbean acroporids following Hurricane Iris in 2001, and persevered with the pioneering coral transplant project. Now, the Laughing Bird Caye National Park, one of seven protected areas within Belize’s UNESCO-attested World Heritage Site of the BBRRS, has 60 percent coral coverage, higher than the coverage before Iris, and growing. “More coral equals more fish,” says Lisa Carne, FOH’s founder and lead scientist. “And it’s amazing how much of a difference you can make […] we now have tour guides who can go out and show their guests a coral reef ecosystem, not just rubble.”

Belize may well be poised to show the world that hope lies within.