A Nepali migrant learns the language of overseas work 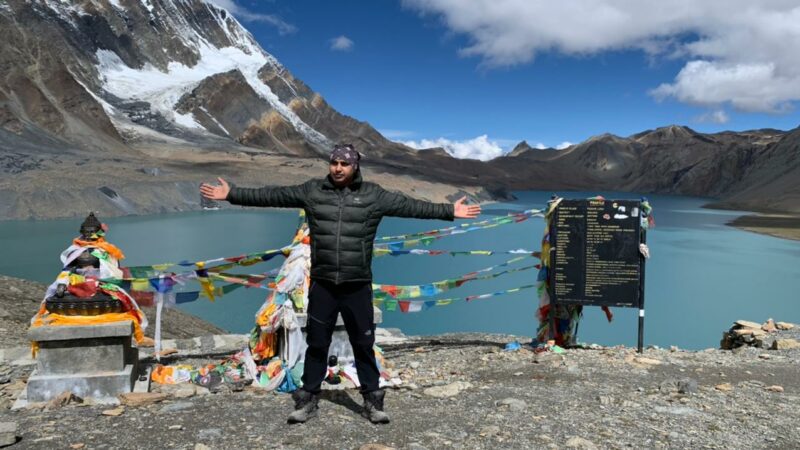 Raju Subedi at Tilicho Lake near Pokhara, Nepal, while guiding Korean trekking guests. Image by the author, used with permission.

This article by Raju Subedi was originally published in Nepali Times as a part of their Diaspora Diaries series and an edited version is republished on Global Voices as part of a content-sharing agreement.

I never intended to migrate overseas for work. But there was talk that families affected during the Maoist period would get a special labour quota in South Korea under its Employment Permit System (EPS). My father, who had been wounded during the conflict, encouraged me to prepare for the EPS Korean language test. And I did.

The special quota rumour turned out to be false, but my preparation did not go to waste. I passed my EPS language test which I prepared for at the travel company I worked for. Soon, in 2008, I was on a plane full of Nepalis in EPS hats and jackets heading to South Korea.

I was homesick and the job at a manufacturing company was physically taxing. It was a difficult first three months. 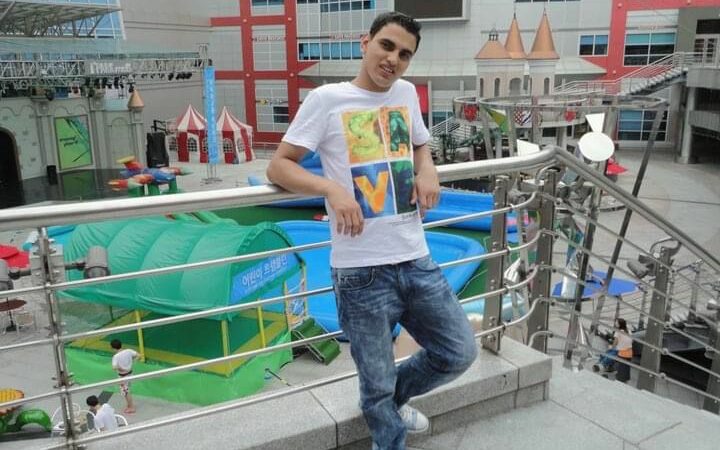 Raju Subedi in South Korea. Image by the author, used with permission.

Sometimes, my hands hurt so much when I woke up after 12 hours of work the day before that I had difficulty even opening the door. My back also started to hurt, and it was clear that the job was not for me. So, I asked my employer to give me a release letter so I could move to another job. It took a while, but he agreed reluctantly.

I ended up switching jobs multiple times. One of them was piling up cartons at another company. I thought that was also too taxing, only to realise that the next job at a car parts company was even harder. The company was prohibited by immigration rules from renewing the visas of foreign workers even though they liked my work as they had just let go two local employees. A migrant worker support group stepped in and decided to sue the company and the government on my behalf.

I had three options: return to Nepal, stay on illegally, or fight a legal battle. The last one made the most sense. The court case bought me time to legally stay in South Korea while the case was pending, but I did not have a work permit so I had to work illegally. 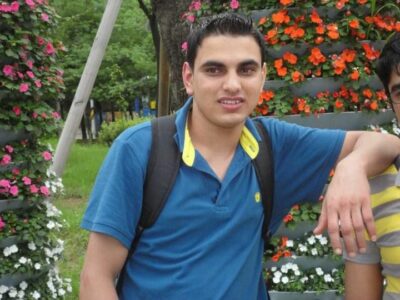 Raju Subedi in South Korea. Image by the author, used with permission.

An irregular status makes you vulnerable and easier to discriminate against whether in pay or just how a worker is treated overall by employers and fellow workers. The court’s verdict finally made the company pay me a month’s basic salary as compensation, but my visa was not renewed. I subsequently applied for refugee status which was also eventually declined. I did not bother to appeal the decision, and after seven years in Korea, I came home for good.

The bright side of the legal battle was that it forced me to learn Korean. Earlier I had learnt Korean just to pass an exam, and by the time I got the job, it had been two years and I had forgotten most of what I had learnt.

It was only when I quit my job and applied for a new one that I realised just how rusty my language skills were. I scrambled to find Nepali seniors who spoke the language fluently whenever I got a call about a potential employment opportunity.

But in court, the desperation to express myself made me learn Korean more diligently, including by watching Korean movies for a couple of hours every day. It was not formal training, but life experiences that drove me to learn the language.

Fighting a legal battle in a foreign country is not easy. It was difficult to take time off from work because a worker’s worth is measured solely by how much we produce. Then, when my employers found out I was fighting a legal battle, they wanted to disassociate from me. They did not want to be found out for hiring an irregular worker. 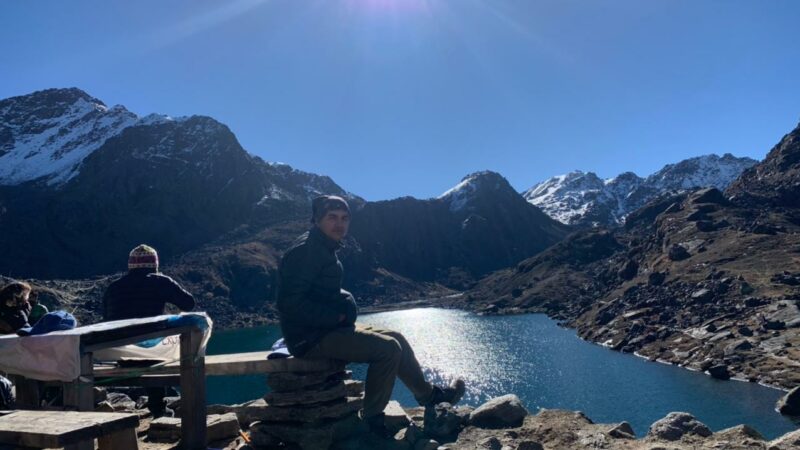 Raju Subedi at the holy lake of Gosainkunda in Langtang. Image by the author, used with permission.

No matter how difficult it got for me in Korea, the thought of coming back to Nepal never crossed my mind. I had bought land in Nepal and was bent on staying on until I paid off my loans. Furthermore, if I did not make it in Korea, I was convinced that I would not be able to make it in life. I, too, wanted to be a Korean success story just like many other returnees I had met in Korea and Nepal.

I struggled a lot. We Nepalis referred to the glittery ‘Korean dream’ as “दुई गुणा अन्ठाउन्न” (Two times fifty-eight) — referring to the Nepalese Rs 200,000 (US$ 1,518) monthly salary over a 58-month period, which was our target earnings. That kind of money would transform my life. 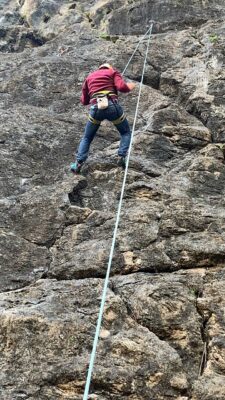 We did not realise that we may not always earn the promised pay a month because overtime may not always be available to top up our basic salary. Or we may not be physically able to do physically demanding overtime work. Besides being difficult, routine and repetitive tasks day in and day out can also be mentally taxing. Since the time I was there, things have improved for foreign workers in Korea and perhaps lessons from the experiences of EPS predecessors like us helped make adjustments to the program.

The journey of my life was full of challenges, but I met the kindest Koreans. One taught me how to repair mobile phones, a skill that has come in very handy. Another hired me back even though I had quit after he found out I was struggling with the court case. I was offered shelter and legal support by strangers who just wanted to help migrants in distress. Before I left Korea, my colleagues even raised money to spend on anything I wanted. There were moments and people who touched me deeply.

It turns out that my connection with Korea only grew stronger after I returned to Nepal in 2015. While I was still trying to decide what was next for me, a friend recommended me to his Korean client who wanted to go trekking in Nepal. At that time, I did not even know that many Koreans came to Nepal for trekking, and that a majority of them hiked to Annapurna Base Camp. The client also ran a trekking outfit company in Korea and started recommending me to people. 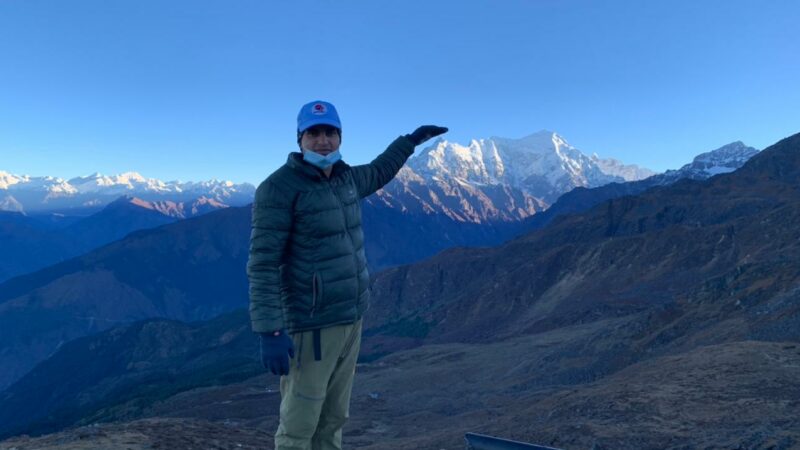 Raju Subedi measuring Langtang from the Gosainkunda trail. Image by the author, used with permission.

I started organising treks for more and more Korean guests, and soon my Seoul-Pokhara Travel and Tours became known in Korea as one of the best Nepali travel companies. I have employed four Nepali Korean returnees and two who have passed the Korean exam and are waiting to go to Korea for work.

My clients are entirely Korean, and the business was going quite well until the COVID-19 pandemic struck. Tourism has revived since then, and on September 12, 2022 alone, for example, I was looking after 12 Korean trekking teams simultaneously. There are some other trekking agencies in Pokhara also catering to Korean clients. Soon, I plan to also start a Korean restaurant in Pokhara.

I may have learnt Korean out of desperation to tell my story in Korea, but it is serving me well today back home in Nepal.