The police commissioner will be first to take the test 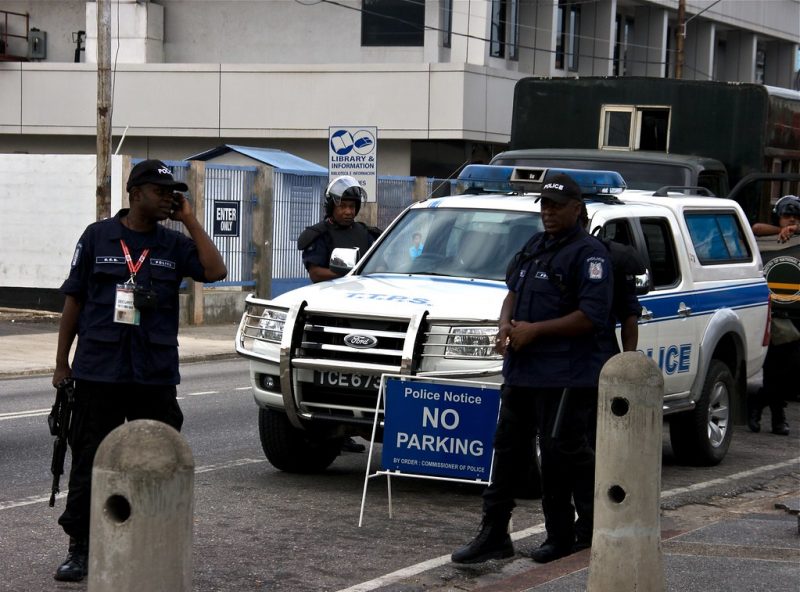 Riot police from the Trinidad and Tobago Police Service (TTPS) outside the St. James amphitheatre in Port of Spain during the Drummit2Summit event in 2009. Photo by Georgia Popplewell, CC BY-NC-ND 2.0.

Trinidad and Tobago's Commissioner of Police (CoP), Captain Gary Griffith, plans to introduce routine polygraph tests for members of the police service, starting as early as the week of July 14, 2019.

Polygraphs, commonly known as lie detector tests, measure physiological reactions to a series of questions in order to evaluate whether or not the subject is being deceptive.

In a country facing increasing rates of violent crime, the move is part of an effort to create greater accountability and transparency within the police service, which does not currently hold a high level of public trust. Some police officers have also said they fear repercussions for reporting fellow officers’ wrongdoings.

While the CoP's announcement has garnered support from citizens who feel it is high time the police service is purged of dishonest officers, others are concerned that polygraph testing would violate a law known as the Police Service Act.

In 2007, new regulations presented in the House of Representatives established that potential candidates for the Trinidad and Tobago Police Service (TTPS) must agree to submit DNA information, as well as to undergo polygraph testing, drug testing and psychological assessment. Then-Minister of National Security, Martin Joseph, explained that they made the criteria more stringent because “the quality of officers was critical for the success of the police service”.

Polygraphs have therefore been part of criteria for acceptance, but thereafter, the tests are not routine except in cases of promotion or transfer to special units. Some officers have called this latest move to make polygraph testing a routine “demoralising”.

In other countries where police use polygraph tests, critics have called their accuracy into question. In the United States, for instance, the Employee Polygraph Protection Act (EPPA) bars most private employers from using lie detector tests, either for screening or during the employment period. But supporters of polygraph testing in the TTPS say these kinds of restrictions should not pertain to public service employees.

In one CNC3 TV news report, Commissioner Griffith shared some of the questions asked of officers on the test, including whether or not they receive remuneration for allowing the passage of illegal weapons and drugs into the country.

While the test is not mandatory, Griffith said it was “amazing to note” that so many officers seemed opposed to taking it, especially in the southwestern part of the country — an area with a heavy saturation of illegal drugs, guns and human trafficking.

“Because of the sensitivity of those locations and those units, you must be polygraphed if you want to be stationed there,” Griffith said, adding that he would set an example by volunteering to test himself first. Those who refuse to take the polygraph test in these high-risk areas may be reassigned to another division. He also plans to introduce random drug testing within the service. Griffith understands that some officers may seek legal advice on the matter, to which he replied, “I have court clothes.”

The Trinidad and Tobago Police Service Social and Welfare Association (TTPSSWA) pushed back on the proposed new parameters for polygraph testing, saying that while the commissioner's intention is “commendable”, he needs to communicate to members the rationale for — and ramifications of — these measures. The CoP is coordinating a meeting with TTSPSSWA to discuss the matter.

TTPSSWA President, Inspector Gideon Dickson, said that while the association agreed with the need to rid the police service of rogue elements, it had to be done within the parameters of the law.

Apart from sections of the general public, Commissioner Griffith has received support from professor Ramesh Deosaran, chairman of the Police Manpower Audit Committee, who thinks that polygraph testing will increase morale and boost public confidence. Former head of the Public Service, Reginald Dumas, also had no objection, in principle, but said the legal ramifications needed to be clarified.

In a telephone interview with Global Voices, human resources professional Lara Quentrall-Thomas said that polygraph testing is not new to Trinidad and Tobago or the wider region; in her experience, it is pretty standard practice in the area of national security. “Especially in small societies like ours,” she explains, “where you're very often policing your own community, you want assurances that those in authority are incorruptible.” There should be no argument with the pre-employment polygraph testing, as employers have the right to determine the parameters of candidate evaluation, Quentrall-Thomas says.

While the police service also has the right to undertake additional testing as part of a new standard of employment, she says, it must be done through a process of consultation with the TTPSSWA union representatives: “People don't necessarily have to agree with it, but they must be given the chance to review, consult and give feedback.”

This falls under the principles of natural justice. Best practice dictates that except in extenuating circumstances like war, for instance, or the adoption of new global standards — the terms and conditions of a person's employment should not be changed without consultation.

Thus far, any failed polygraphs can only be used to determine whether to reassign officers; they cannot be used as grounds for firing them.