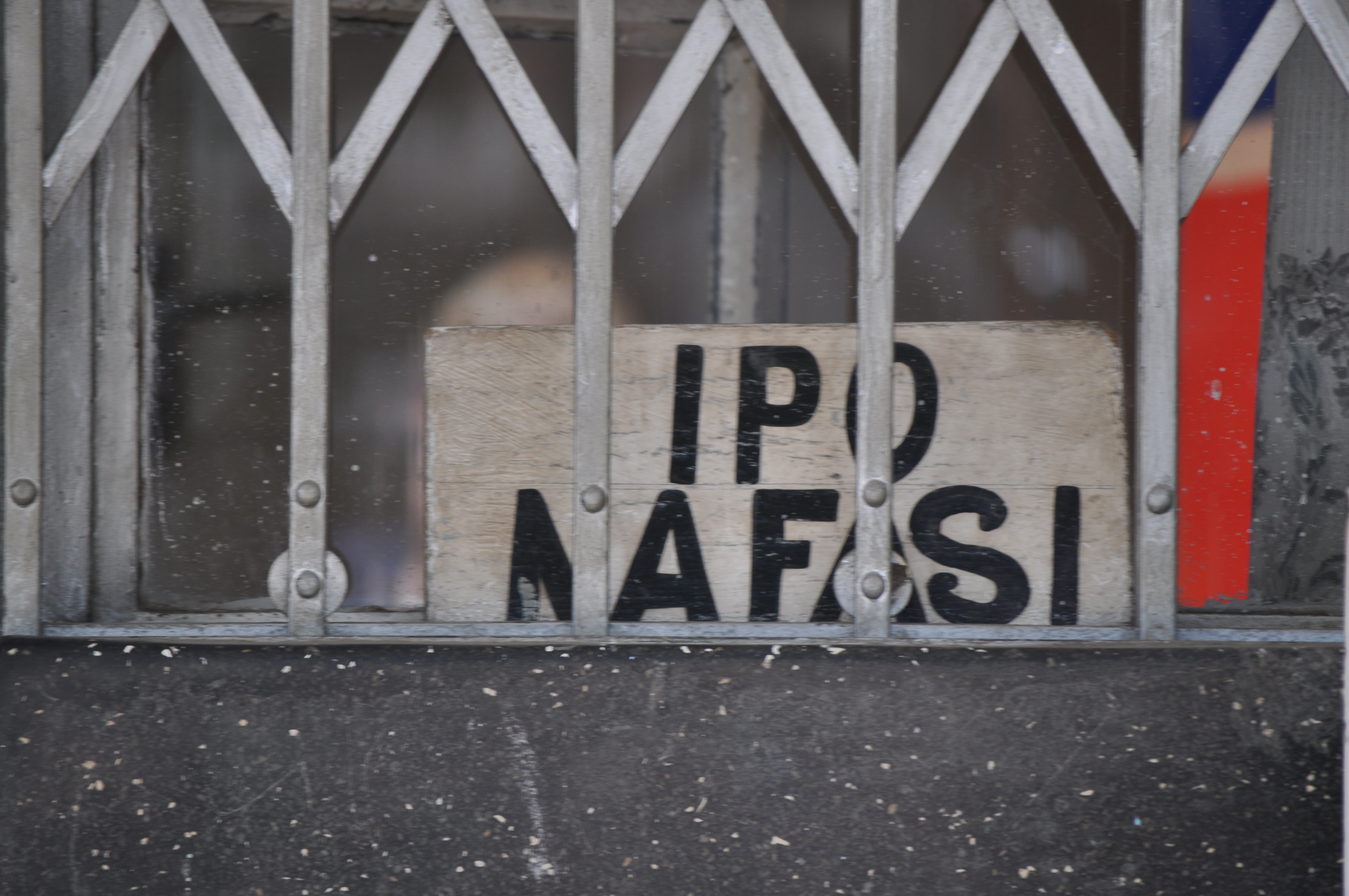 “Ipo nafasi” is Swahili for “Here is space” referring to available rooms at a guesthouse. Free space and freedom of expression are, however, shrinking in Tanzania. Photo by Pernille Bærendtsen with permission.

At a press conference on October 29, Paul Makonda, the regional commissioner of Dar es Salaam, called on citizens to hand over names of homosexuals. Makonda said he and his team would “scrutinize social media” to “hunt down gay people and those who defend them”, while he also warned against the consumption of pornography.

This has left Tanzania's LGBTQ community in fear. Since 2016, Makonda has instigated raids on bars with the intent to track down homosexuals in Dar es Salaam, Tanzania's largest city. After Makonda spoke at a religious rally in 2016, at least 20 people were arrested and then released.

In 2017, South African human rights lawyer Sibongile Ndashe, the executive director of the Initiative for Strategic Litigation in Africa, was accused of promoting homosexuality and arrested while on a case intended to limit health services at HIV drop-in centers. Ndashe and two colleagues were wrongfully detained for a week without representation and then deported.

According to Amnesty International, on November 6, police on the semi-autonomous island of Unguja, Zanzibar, arrested 10 men in response to Makonda's most recent call.

These cases all point to the seriousness of the threats.

A few days later, the US Embassy in Dar es Salaam issued a warning to travelers heading to Tanzania.

The EU recalled its ambassador to ”Brussels for consultations”, adding:

The EU regrets the deterioration of the human rights and rule of law situation in the country and will be conducting a broader review of its relations with Tanzania.

Augustine Mahiga, Tanzania's minister of Foreign Affairs, assured on November 4 that Tanzania had not expelled the ambassador.

Meanwhile, Mahiga must have been working long hours. On the same day, the Tanzanian government suddenly distanced itself from Makonda's campaign, issuing an official statement clarifying its commitment to human rights: 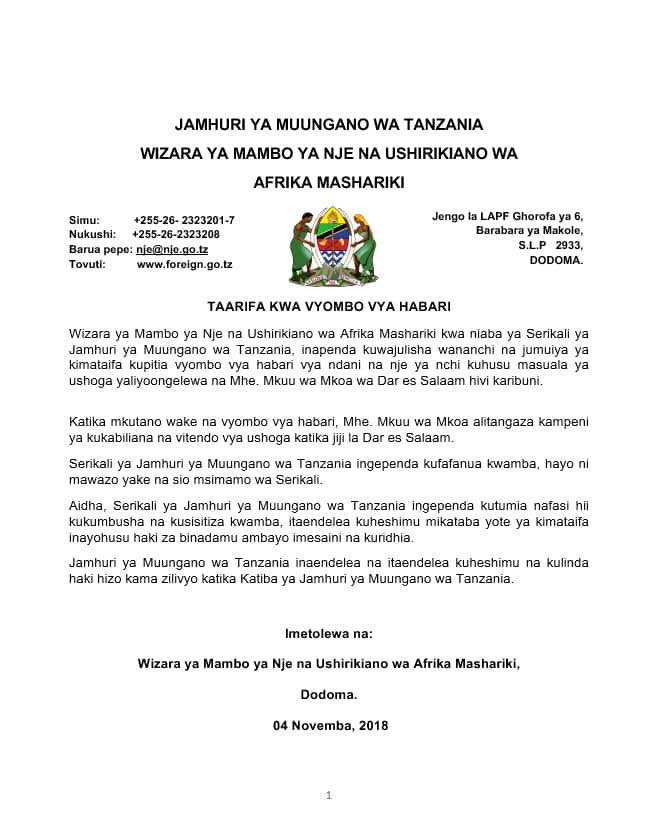 Paragraph 2: In his meeting with the press, the honorable regional commissioner announced a campaign to deal with homosexuals in Dar es Salaam.

Paragraph 3: The government of the United Republic of Tanzania would like to clarify that these thoughts are his alone and not those of the government.

Paragraph 4: Moreover, the United Republic of Tanzania would like to take this opportunity to remind and insist that it will continue to respect all international agreements regarding human rights signed and ratified.

The statement left many wondering why the government did not stop Makonda from making his inflammatory remarks.

Rachael McLellan, a Ph.D. student, provides one possible answer with a cartoon illustrating the nature of Makonda's role as regional commissioner, an appointment designated by the president.

The cartoon referred to an incident in March 2017 where Makonda forced his way into the offices of Clouds Media Group in an attempt to disrupt the broadcast of a video that Makonda feared would tarnish his reputation:

This is from a year or so ago when he raided Clouds Media but I think this gives a good sense of the logic. Makonda can do the dirty work while simultaneously being shielded by the president and kept at an arm's length when people object pic.twitter.com/bI1Onuvb4A

Makonda wields a bloodstained club over an injured figure representing “media”. Above him is an “official” hand, presumably belonging to President Magufuli, holding an umbrella shielding Makonda.

Inclusion and exclusion in question

Within a week Makonda displayed erratic behavior, from issuing brutal threats to weeping publicly in church. Some Tanzanians felt the need to distance themselves from Makonda and the international label of Tanzanians as homophobes:

Tanzania will survive him. And the world will make up its mind in the long-run and they'll see we're not THAT bad.

Defending the rights of homosexuals in Tanzania may, however, lead to accusations of ascribing to Western values — not being a true patriot. Others say it is simply illegal.

The repression and fear also dominate other spheres such as Tanzanian politics, civil society and media.

Opposition rallies have been banned or restricted. Opposition politicians have been enticed with government positions. The ruling party Chama cha Mapinduzi or The Revolutionary Party (CCM) bribe opposition members into joining them and defections have been on the rise, causing instability within parties.

At a symposium held at the University of Dar es Salaam on November 1, the president insisted Tanzania “is on the right path” while underlining his overall goal of development. Development may, however, come at a high cost for people who don't fit into these self-congratulatory plans.

One of Magufuli's strongest critics, Zitto Kabwe, leader of the opposition party Alliance for Change and Transparency (ACT), was not present at the symposium. He was charged with sedition requesting an independent investigation of the alleged killings of 100 pastoralists working on disputed land in western Tanzania.

The new set of media laws gradually introduced since 2015 have been used to repress expression. Combined with unclear interpretation and sanctions, people have gone “chinichini” or “down-down” in Swahili — self-censoring and taking extra caution with communication. Bloggers have handed their blogs over to new owners. Media outlets have been shut down. On November 9, only five days after Mahiga's assurance that Tanzania respects human rights, two journalists working for Committee for Protection of Journalists were detained in Tanzania.

This has made it impossible to have a respectful public debate about homosexuality. Repressed groups don't always share a common agenda or defend each other’s concerns.

For example, rapper Nay wa Mitego released the song ”Wapo” in March 2017 and was promptly arrested for his lyrics criticizing the government. His supporters called out the repression of free expression, but not his derogatory language targeting sexual minorities.

In a November 6 editorial, The Citizen spoke critically of Makonda but also underlined that it does not ”condone the practice … [of] … same-sex relationships.”

Previous crackdowns on homosexuals have fallen on reluctant ears within civil society, which has done very little to publicly support sexual minorities.

Tanzania's relationship with the world at stake

Tanzania’s stigmatization of sexual minorities along with repression of media and political space have caused its relationship with the world to deteriorate. Dissatisfied investors have begun retreating from Tanzania due to the level of difficulty involved in conducting business. About a third of Tanzania's budget comes from foreign aid, and development partners are alarmed. The World Bank announced on November 7 that it will dismiss all visiting missions to Tanzania due to its recent human rights violations.

This may put Magufuli's development financing at risk.

While Mahiga sorts out Tanzania's mixed messages on homosexuality, a larger question persists: Makonda's anti-gay rhetoric has proven harmful to Tanzanian diplomacy — why does he continue to receive protection?