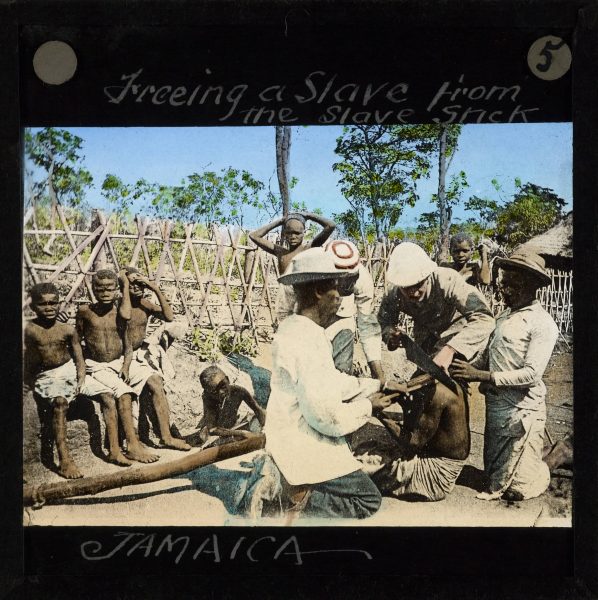 Hillel Academy, a private school in an upscale area of Kingston, was at the centre of a recent debate over a history assignment for Grade 9 students which asked students to create a model for the punishment of a slave.

The wave of online anger began on Facebook, then graduated swiftly to Twitter, where a relatively short-lived but heated discussion began — on history, slavery, race, and class — leaving more questions than answers about how a deeply traumatic period in Jamaica's history should be taught.

The assignment also required students to “discuss [their] chosen punishment type as an example of European civility” since “one justification for the enslavement of African people was their lack of civility”. Details of the history paper were shared in a Facebook post, along with the comment:

So Hillel Academy Jamaica is allegedly asking children to use their creativity to re-create the harm that was done during slavery in written form. The mission is to expand student’s perspective on situations. So if this is really the case
1) Stop this lesson now.
2) Healing, truth and reconciliation is what you should be teaching the affluent and privileged children of a former plantation society, not recount and imaginative wickedness.
3) You are teaching children to be Slave masters. While this may be useful to a white man’s world capitalist society in 1764, it affects the collective esteem of a progressive and civil society in 2018.
4) Ask the directors of the No Violence In love campaign to come speak to your students about the effects of violent narratives in impressionable minds and the need to replace them with new ideas of harmony and empathy.

The Facebook user who shared the assignment added the school's feedback on the issue:

I have hard copy of test and got soft copy of school response:

‘There is some overreaction and I will explain why. The project is based on putting history into perspective. When older kids were at Hillel learning this the method of teaching slavery was largely rote, i.e. just simply regurgitating the facts. Today the methods of teaching history has (sic) changed. The sensitivity of the subject has not changed it is the way it's being taught that has. Students are encouraged to have balanced perspectives wherever possible.’

Founded in 1969 by the United Congregation of Israelites in Jamaica, Hillel is a non-profit, non-denominational institution that goes from pre-school all the way up to high school level. It is regarded as a school for Jamaica's elite; its 750-strong population also includes a fairly large contingent of international students. The fees are considerably higher than those for state-run schools and, in addition to Jamaican examinations, the school offers courses for the International Baccalaureate and is accredited by the Southern Association of Colleges and Schools/AdvancedEd. With a less traditional approach to learning, its motto is “Learning for Living”. According to its website, its goals are to create a student who is more “open-minded, a risk-taker, inquirer, balanced, thinker.”

‘Bright students given the assignment, would write that there is no justification for slavery’

The school's explanation about the assignment, however, did little to assuage the anger of Twitter users, who were particularly miffed at the use of the word “justification”:

The thing I liked about how history was taught in Jamaican schools is that we never ever tried to justify the actions of the colonizers. Especially in today's world with the resurgence of Nazism it's gross to be asking a majority white students to justify slavery

As if in response, a radio station quickly reported comments by a well-known history professor:

NEWS: UWI Professor of Social History Verene Shepherd says bright students given the Hillel Academy slavery justification assignment, would write that there is ‘no justification for slavery’.

One Twitter user suggested that the “bakra masters” (the term means a white slave master) at the school were imposing their perspective on slavery:

Our history is taught through the eyes of the slave master and has its ‘genesis’ in the trans-atlantic slave trade. The bakra masters are now encouraging us to not only learn the history from their perspective but to think how they did. It is shameful.

There were numerous attacks on the school itself — and its students. However, one social media user disputed the common perception that the school is predominantly white:

Whoa guys, Hillel is actually a very diverse school that has predominantly black and mixed students. If we’re gonna criticize, please be factual.

Another Twitter user shared a photo of a quote by Dr. Martin Luther King praising Jamaica's perceived racial harmony during a 1965 visit to the island, observing:

Donkey of the year goes to Hillel Academy for abusing their role as educators of some young minds among us in Jamaica. Callous! – you don't teach empathy by asking students to justify slavery & by describing punishment they would use. #ConscientiousStupidity pic.twitter.com/VISGNDDfBy

An attempt ‘to dissect the warped mentality that was used to justify slavery'?

Realising the scope of the fallout, the school apologised in a statement from the Board of Directors, which was shared both online and in mainstream media, but the discussion had already turned to the persistent question of race and class in Jamaica:

Im not the smartest of the bunch here but isn't racism the foundation on which classism in jamaica stands? We are predominantly black so the basis of our segregation had to take on a new feature which was class. What do i know tho?
“Its not racism its classim”

Another respected teacher gave a balanced but severe critique, which was shared on Twitter in an image. The English teacher concluded:

Teacher, you have erred big time, and I suspect it's primarily because you did not manipulate the English language well enough to structure your question in such a way that the students examine critically the arguments for and against slavery, without leaving your class thinking that there were merits in the enslavement of blacks.

A few people pointed out that the history of — and “justification” for — slavery was regularly taught in Jamaican schools, just not in this way. Another recalled her own study of Caribbean History at high school, noting that such an assignment is not unusual:

I really dont c wat the big deal is about this Hillel history assignment. Is the issue with the assignment or the sch at which the assignment is given? I did C'bbean history and I had to write essays about the rational behind the justification for slavery & the punishments used.

and there was no outrage when we did it lol. Learning about all aspects of slavery is important. Not just the rebellions that make us gleam with pride as we learn about our ancestors but also the line of thinking that put them in chains in the 1st place.

A human rights lawyer, who advocates for slavery reparations, sought to analyse the purpose of the assignment:

This Hillel assignment seems to have been trying to dissect the warped mentality that was used to justify slavery for 400+ years. Many of these slave owners went to church every Sunday and called themselves Christian, and yet were able to rationalize this within their own minds.

‘Are private schools allowed to teach anything they want?’

Would this have been an acceptable assignment in other contexts? many Twitter users asked:

Now to the assignment at hand, would Hillel have asked on an assignment about World War 2 to come up with ways for Nazi Germany to annihilate the Jewish people? pic.twitter.com/weE2PxvlHX

So what went wrong at Hillel? Netizens began to talk about accountability in curriculum planning. One media personality tweeted:

I have moved beyond Hillel. I am asking who vets the lesson plans in schools? Are private schools allowed to teach anything they want? Are schools not licensed to operate in Jamaica under certain guidelines in keeping with our national education and cultural policy? I'm asking.

Others took a broader view of the conversation by reflecting on modern-day slavery:

Today we have tens of thousands of children in Africa working in abhorrent conditions mining cobalt for iPhone batteries or picking cocoa beans for chocolate, and just like the 18th century colonial Europeans enjoying sugar in their tea, too many consumers don't care.

After the social media outrage, the question remains: How should the painful history of the Caribbean, including colonisation and slavery, be taught to the region's younger generations? Judging by the backlash, this recent attempt at “innovation”, even if well intentioned, may have done more harm than good.