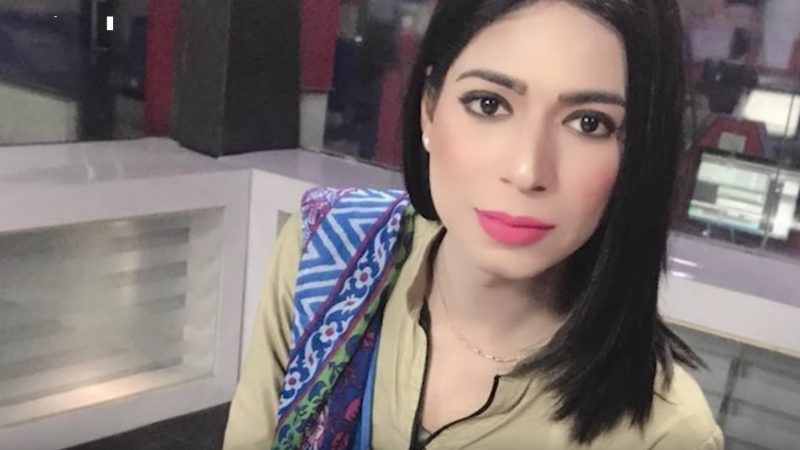 Marvia Malik, 21, is believed to be Pakistan's first transgender news anchor. Screenshot of video by VisualTV Live via YouTube.

In an interview with newspaper Dawn, Malik, whose first job was in a beauty salon as a makeup artist, explained how she viewed the news anchor opportunity:

Everywhere we go, a transgender person is looked down upon. But there’s nothing we can’t do; we’re educated, have degrees, but no opportunities, no encouragement. This is what I want to change […] I’m here to change my community’s destiny, not represent myself as an individual. […] I have set out on this journey to change lives of transgenders.

Malik's success has been praised by celebrities, journalists and activists from all over Pakistan and beyond. British-Pakistani actor and activist Riz Ahmed, in a recent Instagram post, lauded her and commented:

In some ways Pakistan has been ahead of the curve in certain aspects of trans rights. In other ways, it has lagged behind. Hoping we can all learn from each other in paving the way to greater inclusion.

Congratulations to Marvia Malik. In some ways Pakistan has been ahead of the curve in certain aspects of trans rights. In other ways it has lagged behind. Hoping we can all learn from each other in paving the way to greater inclusion.

Pakistan has a mixed record when it comes to gender minorities.

The term “transgender” in Pakistan and elsewhere in South Asia usually refers to a more specific group of individuals known as hijras, who are considered to be neither completely male or female. Activists and non-government organizations have long lobbied for their official recognition, and in a landmark 2011 ruling, Pakistan's Supreme Court ordered the country's election commission to collect data from the transgender community and register them as voters.

But transgender people continue to face discrimination and violence in Pakistan. Many find it difficult to secure employment and turn to begging or sex work to survive.

Malik mentioned this reality in her interview with Dawn, and said she hopes to change this in a specific way:

She wants to push for a law making mandatory for families to give transgender persons their share in property as a boy or girl is. “Transgenders are forced to dance and beg because they have no other means to make ends meet. When they are shunned by families, they have nowhere else to go. My trans friends who have masters degrees don’t have jobs which is why they end up on streets or become sex workers. This is why I want to push for a law so a transgender if disowned, can make a living out of the share in the property.”