Why Is the Biggest Sugar Mill in Western Cuba Economically and Environmentally Inefficient? 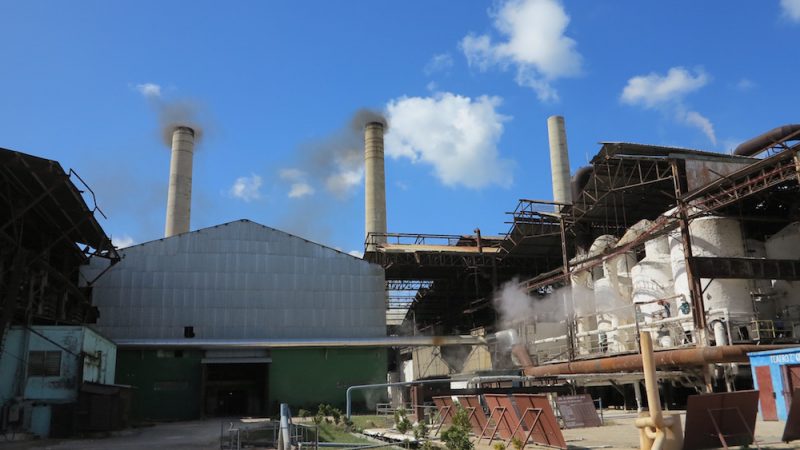 The sugar industry has been a cornerstone of Cuba's economy since the colonial period until today. During its best years, it provided 25% of all the sugar in the world. In towns with sugar mills, residents find that their future, for good or for bad, is tied up with the industry.

Below is an excerpt of the article “Sugar Days,” which examines the environmental impact of the biggest sugar mill in Western Cuba. You can read the original Spanish-language article in full here and other articles by Geisy Guia Delis here.

In October 2002, the Cuban government’s decision to restructure the sugar industry and shut down all factories that were unable to produce sugar at a cost of 4 cents a pound or less was made official.

Before then, the Héctor Molina Agro-Industrial Complex, in the western province of Mayabeque, showed signs of underperformance. However, it continued to stay afloat thanks to the proper functioning of the surrounding arable land, available labor and transportation infrastructure.

For the people of San Nicolás de Bari, that was the best thing that could have happened.

But for years, the biggest sugar mill in the region has produced the worst harvest because it has constantly failed to meet the plans it has proposed, it’s an excessive consumer of water and electricity, and because constant equipment breakdowns cause significant economic losses.

Since the sugar mill was founded in 1850, the settlers constructed an irrigation system to water the sugarcane with the wastewater. Then a distillery was added to the plant, injecting the water with highly corrosive substances, capable of raising the soil’s acidity level and damaging crops. Over the years, with the looming possibility that the water contained heavy metals harmful to human health, the city’s Ministry of Science and Technology committee prohibited the use of this wastewater for irrigation.

“I’ve been here 15 years and all that time we have used the wastewater,” admits Rodobaldo León Aguilar, president of the Cuba-Nicaragua Cooperative of Agricultural Production. “We’re using them practically without treatment, raw. Before I got here, this cooperative used them for the rice paddies and other crops. I know it’s a serious risk. I use them because they cost me nothing.”

Rodobaldo acknowledges that they have wanted to use organic fertilizers such as cachaza, which is another residual of the harvest. However, doing this would mean losses, because the cachaza is very expensive and he has no way to irrigate it in the field.

In his 2014 thesis “Endangered Good Soils: The Degradation of Ferralitic Red Soils in Western Cuba,” Dr. Cs. José M. Febles González pointed out that during the last 30 years, the red ferralitic soils of Mayabeque and Artemisa have suffered intense degradation. “However, specialized literature continues to classify this type of soil as ‘non-eroded,’ which has led to the sequential degradation of Cuba’s most productive soils.”

Ana Julia Castillo, division head of the city’s Ministry of Science and Technology committee (CITMA), is responsible for enforcing CITMA’s provisions and their delegation throughout the province. The measures aimed at reducing the pollutant load of the plant started to be implemented in 2015. Now they are monitoring the liquid waste and some time ago, they began the construction of two oxidation ponds, a fertigation system, grease traps and a solid waste management system such as bagasse. In the ponds, the heavy materials must sediment out, so that the water, when passing through the irrigation, is suitable for use in the fields.

Days before a new harvest began in November 2016, the work was not yet finished. “If there is no solution to the residuals, the plant will not mill,” Ana Julia said on that occasion.

But the decision was not up to the city’s CITMA, but to the province’s CITMA and government, or to the State Council. On November 15, 2016, the boilers whistled, signaling the start of the milling. At that time, residuals were a minor problem compared to the cost of having a paralyzed plant.

In each city, there is a Center for Hygiene and Epidemiology. Pastor Soto Fernández is one of the specialists of that institution in San Nicolás de Bari. According to him, it is almost impossible for them to monitor the plant’s activity comprehensively. They don’t have any equipment to measure air quality, ambient noise levels, soil contamination, or the aggressiveness of the residuals.

The plant itself is not aware of the extent to which it is reducing its pollutant load, according to the director, chemical engineer Alexis Rodríguez. Laboratory tests are performed to check that the acidity values of the water are maintained at a level that allows them to continue to produce. Other than the waters, nothing else is measured. It is expected that with the oxidation ponds and the construction of the fertigation, there will be a clear short-term result, but without numbers, there is no way to confirm it.

Alexis acknowledges that they are not yet in a position to comply with the environmental policies. He has been directing the Héctor Molina plant for two years and is aware that he is at Cuba’s worst sugar mill, “or at what they say is the worst.”

“First you have to prove you make sugar. Then you have to develop a culture of saving energy and water. The system must be geared toward that. And that your people are happy.”

The plant is the city’s main source of employment. Most workers depend on whether or not there is a harvest. Everyone knows that if the plant stops, if they close it down due to inefficiency, this will become a ghost town, as has already happened in other villages.

Before heading the plant, Alexis ran the distillery. In 2016, he won a CITMA award for creating a plant that uses the residuals of this industry in the manufacture of pig food. He claims to have a penchant for environmental conservation, but now he is faced with more urgent challenges: “I have to make sugar to make money.”