How Are Boys and Girls Supposed to Sit, Walk, and Dance? An Experiment in India's Gujarat 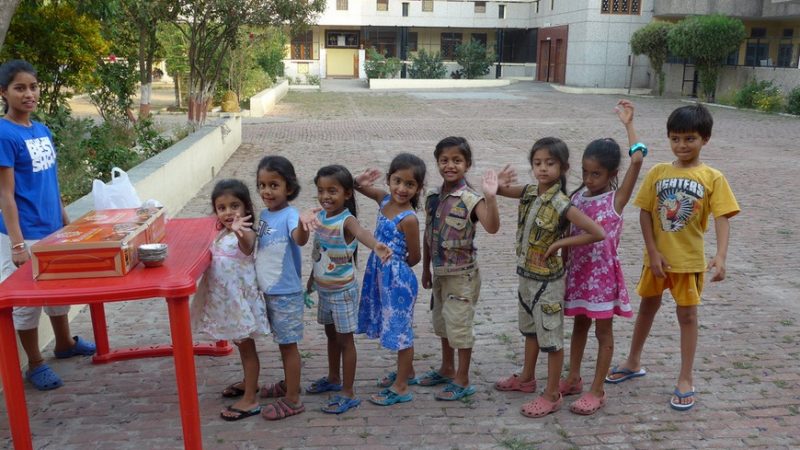 This post was written by Madhura Chakraborty and originally appeared on Video Volunteers, an award-winning international community media organization based in India. An edited version is published below as part of a content-sharing agreement.

Boys don’t cry. Sit like a lady. Barbie for girls and Lego for boys. These are seemingly innocuous adages that generations of people have grown up with. But is it really that innocent or well-meaning?

Most people never learn to question these inflexible binaries and end up replicating them in every aspect of their lives. When a little girl is being given a toy vacuum cleaner and a little boy is being given a NASA tee shirt, people tell them what they expect of them: the girl to become a homemaker and the boy to aspire to become an astronaut.

Apparently we can't even read the same stories any more. Also, boys like aliens, girls like bunnies ?? #genderstereotypes #whyweneedfeminism #startemyoung

This is not simply a difference in roles – it is a hierarchised difference. There is no doubt in peoples’ mind that an astronaut is a harder thing to become compared to someone who can vacuum a house.

Community Correspondent Daxaben Punjabhai from the Indian state of Gujarat, set out in a rural area to explore how children there relate to gender stereotypes imbibed from their families and surroundings. Although, Gujarat is an economically developed state, it has ranked low on social equality indices. She asked them to perform how girls and boys act in various situations: how do boys cry, laugh, sit, stand, walk and dance? And how do girls do the same? Their responses are not as uniform as one might expect, as seen in the video below.

Sometimes gender difference is only limited to the sartorial: boys don the dupatta (scarf) to indicate they are now acting in a feminine role. Girls wear sunglasses and a hat when they are enacting masculine roles.

However, a clear difference emerges between the two genders when they are asked to show the difference in sitting, standing, walking and dancing, whereas they cry and laugh in a somewhat similar fashion. Both boys and girls think that when girls sit, they do so in postures that are markedly ‘feminine’: a hand on the cheek, primly folded legs. When boys sit, there’s casual masculine insouciance radiating from them: hands crossed over the chest authoritatively, or legs spread comfortably apart. 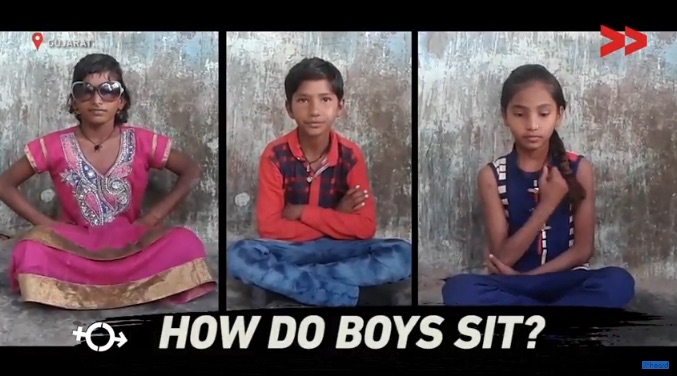 Asked to imitate how boys sit, both girls and boys struck authoritative postures.

Girls are supposed to sashay like they are on the ramp when they walk. Boys have a definite swagger, upturned collars and often wear goggles (apparently). 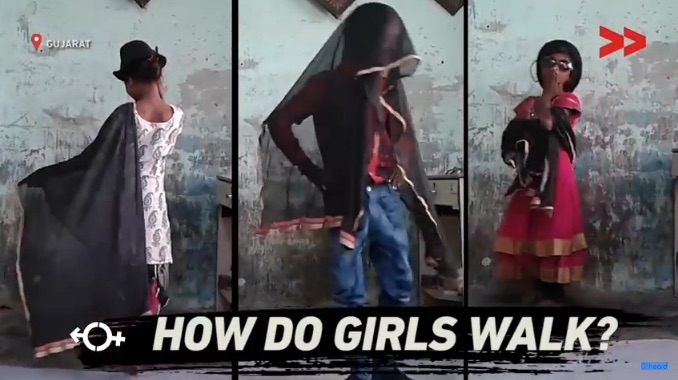 Stereotypes dictate that girls are supposed to sashay like they are on the ramp when they walk.

The most marked difference is in how boys and girls are perceived to dance. Girls are demure, mostly using a dupatta, and their dance moves are limited to hand movements and saying hips.

The girls think that boys, on the other hand, only perform the Punjabi bhangra – uninhibited and an exhibition of joyous exuberance. Boys themselves think that their dance moves must show how physically able they are – they turn cartwheels and do complicated breakdance moves.

According to this little girl, this is how boys dance.

Girls shake their booty, according to this boy.

While it is entertaining to watch them perform with so much enthusiasm, the video highlights the hierarchy that is inherent in patriarchal gender roles. The girls dance without inhibition when they are imitating boys. So it’s not like they are incapable of, less skilled than, or enjoy it any less. But something imposes a restriction on them – their patriarchal milieu.

Some might be tempted to argue that things are a lot better for girls in an urban or megacity environment. But is it really so? Radhika, who works at the Video Volunteers Goa office, recalls that she had to establish her femininity as a child:

I had short hair. So all the neighborhood kids would keep referring to me as a boy. I countered them by pointing out my painted nails: how could I be a boy if I was wearing nail polish?!

But not every instance is so innocuous: boys are berated for crying or acting “like a girl” which can lead to serious mental health issues. Within the prescribed patriarchal roles, boys should never express their emotions or vulnerability – surely, a horrible thing to condemn a young child to.

Similarly, girls are rewarded for being “cute” or “pretty”. Girls are not “brave”; they are “princesses”. One study revealed that parents are four times more likely to caution their daughters against childhood mishaps that are not life-threatening but entail a visit to the emergency room than they are their sons.

My Son with his newly demanded Kitchen Set. Thanks to his Father who helps me in #BreakingStereotypes of job roles. #livingfearlesslyauthentic #indianstereotypes #jobroles #genderstereotypes #kitchensettoys

When children are not forced to conform to fixed gender stereotypes, they learn to view the world outside the constrictions of the pink and blue lens. A boy who plays with a kitchen set might just learn to help with household tasks rather than requiring a laundry detergent advert that preaches to men to “share the load” by occasionally operating the washing machine.

More and more young women across the world are writing, painting and creating memes to challenge and subvert the expectations of traditional gender roles. They are doing this with humor and empathy, but experience abuse from online trolls who resort to ever more vicious attacks to “defend” their male privilege. The onus is on us to talk and write about challenging gender roles so that someday a little boy wearing a skirt and a little girl who plays with toy soldiers are no longer seen as aberrations.