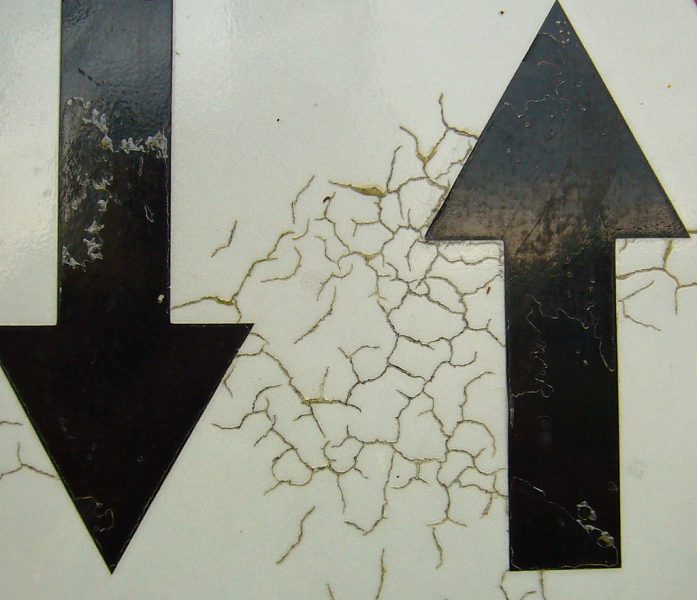 On the afternoon of December 6, 2016, Trinidad and Tobago experienced a strong earthquake — reportedly 5.8 in magnitude. Lasting as long as a minute according to some reports, the quake was originally thought to be as high as 6.2.

Its epicenter originated 16 kilometres south-east of Scarborough, Tobago's capital city, at a depth of 29 kilometres, but netizens across both islands felt its effects.

Netizens from both Trinidad and Tobago posted videos of their experiences on Facebook. Despite the quake's vigour, there were no reports of injuries or serious damage, although a hotel in Port of Spain experienced some breakage and one popular grocery in the west of Trinidad had much of its stock fall off the shelves:

I swore to God that was it for us! #earthquake #trinidad

On the heels of the tremor, heavy rains began to fall in some parts of the country:

Now right after the #earthquake, the rain now starts to fall.#motherEarth‘s having a full conversation with #trinidad and #tobago.#trini

Even netizens who are usually unperturbed by earthquakes thought this particular one was a bit too much to bear:

I'm always excited for earthquakes but this one was terrifying ? #earthquake #Trinidad

Commentary soon followed about the country's perceived readiness — or lack thereof — in the face of natural disasters:

Today's earthquake was 6.2 on seismic measure – the one that destroyed Haiti was 7.0! When are we as a state going to implement Evacuation Mechanisms and buffers? Trinidad and Tobago is directly in a high-risk Earthquake Zone – the Central Range Fault Line:
In 2010 the U.S. Geological Survey revealed that Trinidad sits directly on top the Central Range Fault line – an unstable, high-risk earthquake zone running through the centre of the island. Subsequent research conducted (2013) by the Seismic Research Centre (SRC) in conjunction with foreign experts concur that an earthquake with devastating consequences even more catastrophic than the 7.0 magnitude earthquake that hit Haiti can be triggered along this fault line as pressure has been building dramatically on the tectonic plates bordering South America on which the Caribbean basin is situated. The entire Central Range-Warm Springs Fault Zone runs roughly from eastern Manzanilla to Claxton Bay and extends offshore on both sides of the island, so that the entire country is at risk of disaster.

Unfortunately, panic and rumours soon began to get the better of some netizens, who were posting false information about the country being on tsunami watch. The Office of Disaster Preparedness and Management (ODPMTT) quickly issued a statement advising citizens that “all pertinent information will be disseminated ONLY through official ODPMTT and UWI Seismic Research Centre social media platforms and public releases. We reiterate that this rumour is FALSE.”

‘I laughed a lot tonight after the earthquake…’

Once it was clear that there was no imminent danger, Trinidadians and Tobagonians began to do what they do best in trying situations — laugh. On Facebook, Elspeth Duncan explained:

I laughed a lot tonight after the earthquake…reading status updates and comments about who dived under tables, whose arthritis suddenly disappeared as they ran down three flights of stairs, who ran outside, who was frozen in a chair as their multi-storey building rocked from side to side, etc. I know it's not funny, but there's a degree of amusing drama and excitement in the Trini accent that comes across even in the written word of a status update. But the two that really had me laughing were the one who bathed and dressed in case of evacuation and the one who ran to the safe to get her passport!

#Earthquake!
My first guess was dragons, but my fiance assured me otherwise.#Trinidad

All my desktop icons fell to the bottom of the screen. #earthquake #trinidad

Twitter user Khadine tapped into the Trinbagonian penchant for partying under any circumstances:

A couple of Facebook users took the opportunity make jabs at previous governments, whose proclivity for using Chinese contractors on state construction projects earned them much criticism, especially as certain buildings allegedly had safety issues.

Next came the memes. One photo, posted by the Facebook group WTF Trinidad, took aim at the country's reputation for unpleasant customer service: 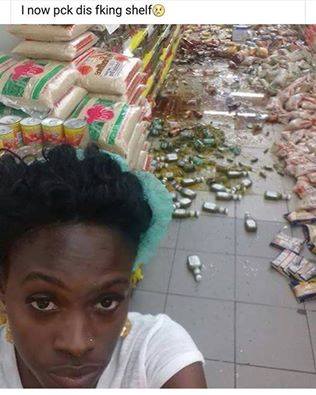 Another supermarket meme was tickled by the fact that seemingly the only product that hadn't fallen from the shelves was a local brand of juice. The meme wasted no time in playing on the brand's tagline: 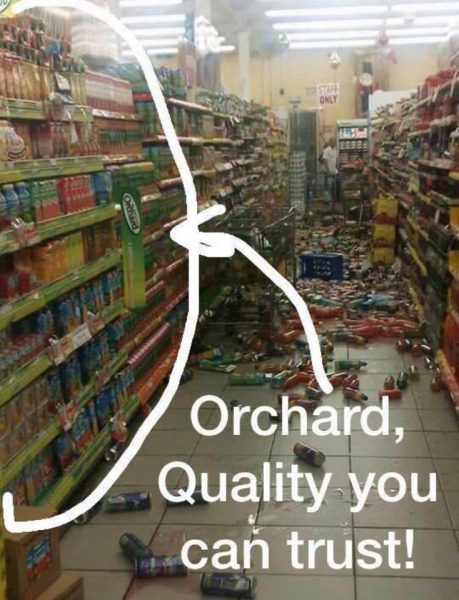 Meme shared on the Facebook group Meanwhile in T&T.

Lexo TV's Facebook page, which has become famous for the production company's creation of the caustic “Santana” puppets, took the angle that is often the default position of Caribbean societies when natural disasters strike — religion: 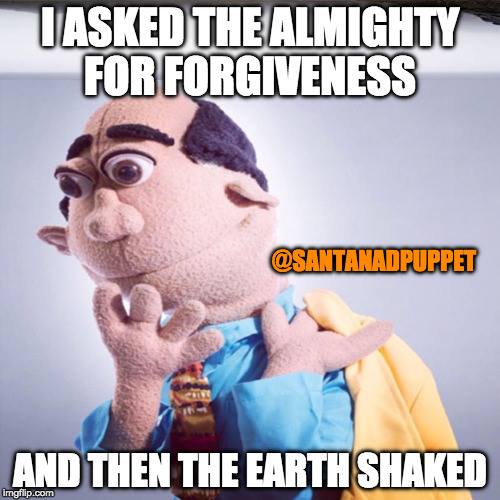 Not to be outdone, Facebook user Gilberte O'Sullivan said in a public Faceook post, tongue firmly in cheek, “Repent!”

Finally, popular satirical website The Late O'Clock News attributed the cause of the earthquake to the plummeting grade point average (GPA) of students nationwide:

The Seismic Research Centre of UWI, St. Augustine has confirmed that the source of this afternoon’s earthquake was the result of a massive drop in the collective GPA’s of our nation’s tertiary students.

While the Ministry of Education has blamed the falling GPAs on a lack of discipline in our country’s youth, UWI student Curtis Collins shared a differing opinion:

‘Ever since they raise the alcohol tax, it get a little harder for students to buy rum. Is exam time, everybody want to relax and take they mind off the stress a little. What you think will happen now that we can’t afford a lil Puncheon?’

All jokes aside, citizens have been warned to brace themselves for aftershocks. The Seismic Research Centre at the University of the West Indies has since confirmed that there have been two more tremors since yesterday's earthquake.