As Politicians Beat the Drums of War, Ordinary Indians and Pakistanis Call for Peace 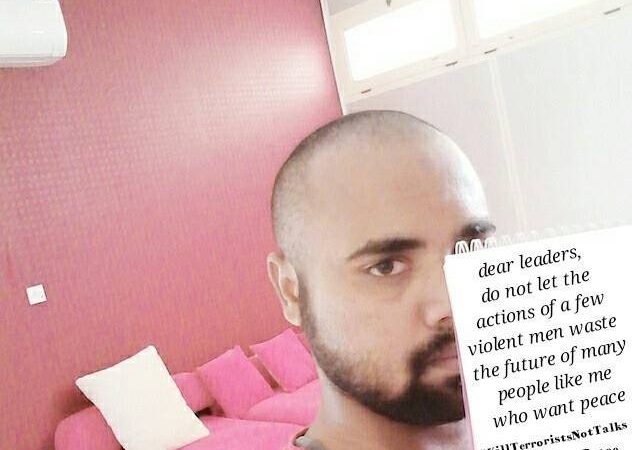 An attack by armed militants in Uri, the Indian-administered state of Jammu and Kashmir, on 18 September has heavily soured the relationship between India and Pakistan. The assault — reportedly the deadliest in two decades — killed 17 Indian soldiers. India followed up with “surgical strikes” on suspected militants preparing to enter the country from Pakistan-ruled Kashmir.

The territory of Kashmir was already a sore spot for India and Pakistan because both disagree on who has claim to it. But after the violence, Indian politicians have fueled tensions with talk of reviewing a water-distribution treaty with Pakistan or vowing to “isolate Pakistan internationally”. And Pakistani politicians have joined in the bullying by threatening to destroy India with atomic bomb.

However, ordinary citizens on both sides of the board are taking a stand against war.

I strongly condemn all terror attacks We must realise that a life lost is a LIFE LOST!The world needs to stand together against terrorism!✋🏻

Dear India & Pak, you guys are never going to fight out and find a solution. So stop. If nothing else works, ignore each other. But no war.

Netizens and prominent figures from India and Pakistan have revived a social media campaign called #ProfileForPeace, which began in 2015, promoting unity and respect between the two countries.

A petition on Change.org “urge[s] our leaders to come up with creative diplomatic solutions instead of engaging in a violent display of military might that threatens to destroy precious human life and natural resources.” It is currently 560 signatures shy of 5,000; the plan is to deliver it to both of the prime ministers of India and Pakistan.

Youths are taking a stand against any sort of war and are urging politicians to sort out the differences out and work towards peace. An Islamabad-based young woman named Alizay Jaffer wrote in a Facebook post about the India-Pakistan relationship:

What’s strange is the burden we carry of decisions made in our pasts, based on an entirely different socio-political context, when a common, exploitative antagonist made sure we saw each other as the aggressor, and boy, did we fall for it. What’s strange is our prolonged blindness to the immense opportunities that lie before us as a unit, and the vast desolation that lies before us as enemies.

She ended her post by putting her trust in the people of India and Pakistan:

it is comforting somehow, that when I messaged one of my closest friends across the border, expressing concern over the destructive megalomaniac tendencies of our governments, he responded and said, “It doesn’t matter what they do, you know I will always love you.

Amidst of all the animosity, 20 girls from different regions of Pakistan traveled to India to take part in the 11th Global Youth Peace Festival there. Though the girls’ families were worried about their safety, the girls also came with a clear message of peace:

I must say it's a matter of foreign policy. The governments should negotiate and talk with each other, because the public is so welcoming, and the people of both the countries want friendship, want peace. No one wants the war.

The tension has affected the media and showbiz world of both countries as well. Pakistani theatres have taken down Indian movies, and a portion of Indian media has called for bans on Pakistani individuals involved in the Indian entertainment world. Celebrities on both sides have been reflecting on the spillover, with some talking in support of the actions, and some opposing them.

‘Patriotism’ that propagates HATE is not patriotism. United we RISE. Divided we fall. Politicians polarise to rule not serve society.

Pakistanis ban our films, target our artistes: terrible, I agree. But do we want to be like them, or be a cut above? 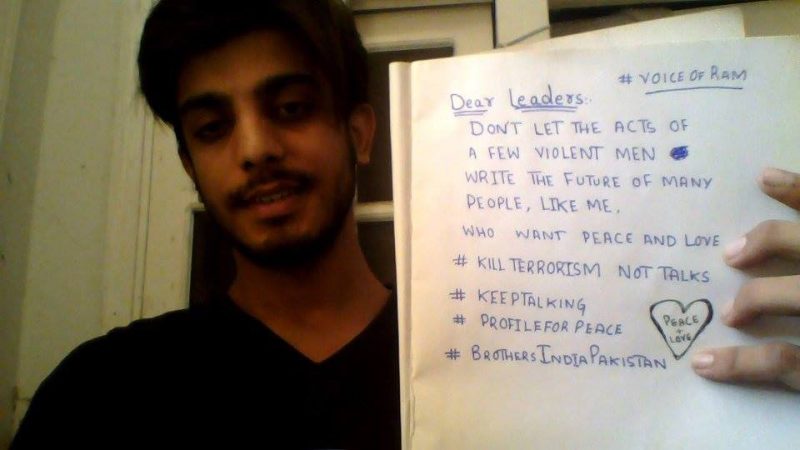 On Facebook and Twitter, users have posted their messages and photos against possible war under the hashtags #ProfileForPeace and #KillTerroristsNotTalks. Ram Subramanian from Mumbai, who started the #ProfileForPeace movement and who calls himself an “artivist” (artist + activist), has been raising his voice against the diplomatic and military chest-thumping between India and Pakistan:

Millions of Indians and Pakistanis are getting along famously with each other all over the world. Millions more might be able to become truly independent of this rubbish that has been a collective bane for almost 70 years if you decide on it. Both India and Pakistan are still third-world countries because of third-world leadership.

People, however, have questioned the purpose and effectiveness of hashtags. Muhammad Zakariya commented:

Making posters and giving it to someone who doesn't know what has happend to the people who are fighting for their freedom is completely insane. This is utterly disgracing. If you want justice go there and put these same posters in their hands and tell them to stand by it. They wont. Because what they have suffered, you can't even imagine.

China is trying to calm the situation down between the two nations by mediating talks. But, given the long history of rivalry between the two countries, it is highly unlikely that the tension will resolve soon.