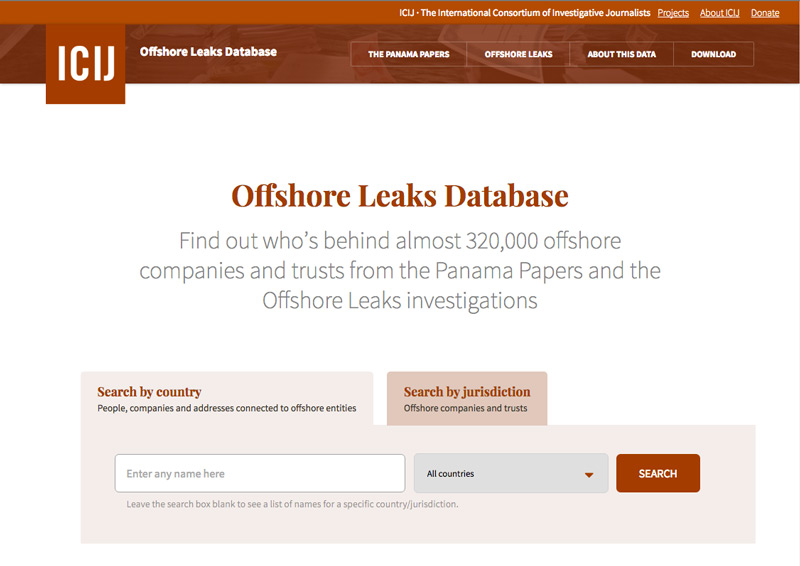 A screenshot of the searchable database offered by the International Consortium of Investigative Journalists.

With the latest Panama Papers revelations piling on the perception that India is a country of haves and have nots, Indians on social media are questioning the response of those in power.

The International Consortium of Investigative Journalists (ICIJ) released an online database earlier this week in which users can search more than 300,000 names of people and companies that appear in the organization's Panama Papers investigation into the legal and illegal offshore holdings of the world's elite.

The data is only a selection of the more than 11.5 million financial documents leaked from Mossack Fonseca, a Panama-based law firm, and analysed by ICIJ journalists and partner news networks around the globe.

Nearly 37,000 files related to India were released by ICIJ as part of the database, and among those entries are 2,000 Indian individuals, entities and addresses. According to the Press Trust of India, that's about 22 offshore entities, 1,046 officers or individual links, 42 intermediaries and as many as 828 addresses.

The Panama Papers investigation was announced in April, and included the news that A-list Bollywood actors, businessmen and other high-profile people in India have or once had offshore holdings. It led the Indian government to create a Multi-Agency Group to probe for any wrongdoing, which comprises officers from numerous central investigative agencies such as the Income Tax department, Reserve Bank of India and Foreign Tax and Tax Research.

The government also announced that the Income Tax department has issued notices to a number of entities mentioned in the papers.

@Snowden Here in India #panamapapers is just a rustle in the wind,of dead leaves.

Even before the release of the database, users were skeptical about the government's response.

Modi's friends Adani, Amitabh and Ajay Devgan are all patriots who chant Bharat Mata Ki Jai. They all figure on #PanamaPapers too. #BMKJ

Though some did defend the course of action taken:

Tax notices have gone to all the names that came up in #PanamaPapers.
Modi govt acting strictly. All those who made noise are now silent!

On Facebook, Rabindra Nath Roy complained that authorities were all talk and no action on anti-corruption measures:

So long Modi Govt. has done nothing about initiating investigation into the names of Indians appearing in Panama papers, many of them are [ruling Bharatiya Janata Party] as well as [opposition Indian National Congress] leaders. And Modi's election campaign is that since he has taken over there is no corruption. He is infact sleeping over the issues of corruption unless it is electorally beneficial.

During the general elections of 2014, Modi promised to systematically weed out corruption in the government. This was a direct attack on the leading opposition party, Indian National Congress, which was mired in numerous corruption scandals.

But two years into Modi's governance and the general public are questioning the lack of substantive action. The Panama Papers and subsequent reaction on social media is indicative of the same growing discontent among the public and civil society.

Ramesh Sharma wrote that the user-friendliness of the database could only help authorities in their investigations — “if they are serious”:

With the entire database of Panama Papers now available how long before we find the truth of actually how much black money has been siphoned off from India to tax havens. This could help investigators, if they are serious, to at least begin a meaningful investigation. The site is so user friendly, you need to type in names to get to those who have been lazy and not covered their tracks with multi layered shell companies

And others criticized that the Indian justice system is tilted in favor of the rich:

Iam sure that none of these will be caught., because of loopage of our court system., in our court only poor will be punished and rich can hire number of lawyers and run cases for [number] of years and finally he will be spared,.

The onus of bringing those involved in illegal tax evasion to justice lies with the Indian government and law enforcement agencies. Indians will be watching their response closely.