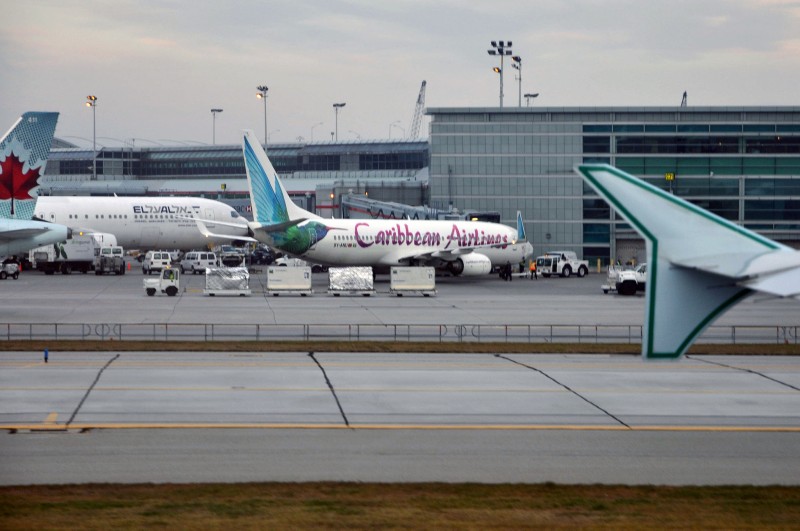 A Caribbean Airlines 737 on the tarmac, prepping for its return to the region. Photo by Caribb, used under a CC BY-NC-ND 2.0 license.

Jamaica's relationship with its neighbours to the base of the Caribbean archipelago, Trinidad and Tobago, has been an uneasy one for at least the past decade in one specific area — it believes that its citizens are too often denied entry and unfairly treated when arriving at Trinidad's Piarco International Airport.

This concern usually leads to discussions in the Jamaican blogosphere about the ongoing trade gap between the two Caribbean Community (CARICOM) nations, conflating the two separate issues of trade and immigration. It also fuels a general public perception in Jamaica that its nationals are not particularly welcome in some other CARICOM territories, Trinidad in particular.

Over 150 Jamaicans have been denied entry to the twin-island republic this year alone — a higher rate of refusals than in 2015, so far. Moreover, Trinidad noted that it had approximately 19,500 illegal Jamaican immigrants in 2014. While efforts have been made at intervals over the past decade — including the signing of a joint agreement to facilitate easier trade and freedom of movement signed by both foreign ministers in 2013 — problems persist. Since the 2013 agreement, further complaints of mistreatment at Trinidad's port of entry have been reported.

It isn't just Trinidad and Tobago. In that same year, the Caribbean Court of Justice awarded Jamaican Shanique Myrie total damages of over 77,000 Barbadian dollars (about 39,000 US dollars) after she took the Barbados government to court over unfair treatment. Myrie alleged that when she travelled to Barbados on March 14, 2011, she was discriminated against because of her nationality, subjected to a humiliating body cavity search, detained overnight in a cell and deported to Jamaica the following day. Myrie also claimed that a Barbadian immigration officer made derogatory remarks towards her.

The court's landmark ruling set the stage for a clearer understanding of CARICOM's rules regarding freedom of movement, as outlined in the Revised Treaty of Chaguaramas, setting nine new protocols — including those related to the free movement of CARICOM nationals among its 15 member countries. CARICOM citizens have always enjoyed visa-free travel within the English-speaking Caribbean, but free movement as it relates to the CARICOM Single Market and Economy (CSME) includes travel based on professional skills. This means that any citizen of a member state has the right to seek work in another member territory without having the hassle of work permits or limits regarding the length of their stay. However, in Article II of the Charter of Civil Society, which deals with Respect for Fundamental Human Rights and Freedoms, it states:

Freedom of movement within the Caribbean Community [is] subject to such exceptions and qualifications as may be authorised by national law and which are reasonably justifiable in a free and democratic society.

More of the same?

Fast-forward to 2016: The political administrations of both Jamaica and Trinidad have changed. Is it now time to turn over a new leaf? Perhaps, but a recent incident has sparked a new round of complaints. On March 21 this year, 12 Jamaicans arriving on two separate Caribbean Airlines flights were denied entry at Piarco Airport and deported the following day. Members of the group angrily accused Trinidadian immigration officials of treating them disrespectfully and not providing proper facilities for their overnight stay before they were made to return to Jamaica.

The Trinidad and Tobago Government disputed claims that the Jamaicans were ill-treated and maintained that the immigration officers’ actions were in accordance with local immigration law, as they were “likely to become a charge on public funds”.

Jamaica's new minister of foreign affairs and foreign trade, Senator Kamina Johnson Smith, asked those who felt they were wronged to provide the ministry with full details so that it could properly investigate. The ministry reiterated — on several occasions — that there is a mechanism in place for Jamaicans to report any alleged breaches of their rights as CARICOM nationals. In an April 13 statement, Johnson Smith noted that while talks are ongoing, the Jamaican government remains concerned and is asking for “specific timelines” in which its Trinidadian counterparts should address key issues arising from the Jamaican citizens’ detention and deportation.

Jamaican private sector leaders responded swiftly and vigorously; the news seemed to revive old trade-related grievances between the two countries. Head of the influential Private Sector Organisation of Jamaica, William Mahfood, called on Jamaicans to boycott Trinidadian goods until the twin-island republic complied with regulations regarding freedom of movement under the CSME. Leader of the Jamaica Manufacturers’ Association Metry Seaga echoed the call, seeking urgent action on a laundry list of concerns — a stance the Jamaica Observer newspaper supported in an editorial.

Public perception persists, though it might be exaggerated, that there is a general antipathy towards Jamaicans. Popular music station Irie FM reported “social media outrage” at a sign posted on a Trinidadian beach banning the playing of dancehall music, a genre that most Jamaicans are fiercely proud of.

Many Jamaicans are uneasy about the tension between the two countries. Entrepreneur Latoya West Blackwood observed on Facebook:

Would be interesting to have a detailed report on the over 100 recent cases of denied entry including children. I don't believe the predictable call for boycotting products should be our focus or will yield any viable solution; we should be buying Jamaican anyway and only accessing what is not available via importation. There are several Trinidadians living, studying and working in Jamaica. How is this different from Jamaicans who wish to do the same there? Jamaica needs to revisit this whole idea of CARICOM, the single market and economy aspect in particular. Would be interesting to know how many of the Jamaican graduates who have been told about free movement and skills certificates have actually been able to access such opportunities in the real sense.

Debate over the right course of action

Several Jamaican commentators feel that it is high time that concrete actions are taken to resolve this long-standing issue. Meanwhile, Jamaica's private sector counterparts in Trinidad and Tobago believe a boycott of their goods would be counterproductive and of no benefit to CARICOM consumers. President of the Trinidad and Tobago Manufacturers Association Dr. Rolph Balglobin says he has expressed his association's concerns to their own government, calling Jamaican media focus on the Private Sector Organisation of Jamaica's stance “most unfortunate.” He added in a radio interview:

Jamaican Alexander Scott observed, in a letter to the editor, that no matter the country's sterling accomplishments, crime is what people, “especially this side of the world, associate with Jamaica”:

We need to look within ourselves and deal with our crime problem and our broader societal issues. Until we do that, Jamaicans, especially poorer ones, will continue to be harassed and unjustly treated at many ports of entry.

Coincidentally, CARICOM Secretary General Irwin LaRocque is scheduled to travel to Jamaica in the coming week for talks with government officials. Minister Johnson Smith has made it clear that the issue will be firmly on the table for discussion; it has also been placed on the agenda of the CARICOM Council for Trade and Economic Development, which meets this week. While talks continue, Jamaicans hope that the issue will be dealt with once and for all.

Meanwhile, several Trinidadian companies participated in the biennial Jamaica Expo — the island's largest trade exhibition — which took place this weekend in Kingston. At the expo's official opening, Jamaica's Prime Minister Andrew Holness, without specifically naming Trinidad, made it clear that Jamaica will stand firm in ensuring a level playing field in trade; this was met with sustained applause from the audience.