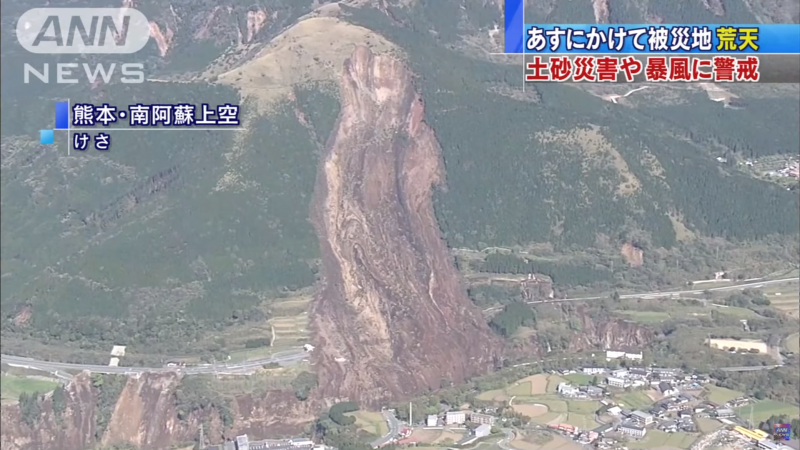 By some counts, as many as threes large earthquake have struck Japan's western island of Kyushu between April 14 and April 16. At least 37 people have died so far.

Collapsed houses, flooding, landslides, destroyed roads and bridges — plus the possibility of an imminent volcanic eruption — have combined to make this series of earthquakes Japan's worst natural disaster since the “Triple Disaster” of March, 2011.

The following tweet shows how widespread earthquakes are across far western Japan (values indicate “shindo” or earthquake intensity, rather than magnitude):

[Main Tweet] Powerful earthquakes continue in Kyushu, including in the vicinty of Minami Aso, home of [the] active Mount Aso volcano in Kumamoto Prefecture.

Getting the numbers right

Ogawa Hajime, a journalist working with Mainichi News, notes that there were actually three ⤔ not two — earthquakes:

The latest quake occurred at 1:35 a.m. local time on Saturday, April 16. The epicenter was once again located in the city of Kumamoto, but damage was reported throughout the island, notably in the Kumamoto and Oita prefectures.

The village of Minami Aso, in eastern Kumamoto, at the foot of Mount Aso, Japan's largest active volcano, was hit particularly hard.

The earthquake, combined with heavy rains, caused landslides that washed out roads.

All approaches to the heart of the municipality of Minami Aso are blocked. A crevasse has dropped the road surface by as much as 10 meters. Landslides like this are hindering relief and rescue efforts. Large, violent aftershocks continue. It's dangerous to be here.

The town Uto, about １０ kilometers southwest of Kumamoto Prefecture, was also reported to be hard hit by the earthquake.

Uto Municipal Hall: this is supposed to be the disaster management center. Amakusa (also in Kumamoto Prefecture, southwest of Uto) has also been hit by an earthquake. In Kumamoto City apparently casualties are flooding in. Aftershocks are continuing so please take care of yourselves.

Heavy rains over the weekend have also caused massive landslides that have wiped out roads, destroyed train tracks, and made life miserable for evacuees stuck out in the open.

[Scenes of Disaster in Minami Aso, Kumamoto] A large section of hillside has collapsed as torrential flooding continues. We can see that a bridge has been washed out.

There are also reports that dams have been weakened, raising fears of collapse and subsequent flooding of low-lying areas.

Many dead, injured and displaced

While the number of casualties may likely rise, 37 people have been reported dead thus far, with hundreds more wounded and tens of thousands left homeless. Up to one hundred people were trapped under buildings.

In Mashiki Township (east of Kumamoto City) there are reports of dozens of people trapped under toppled buildings. There are large numbers of injured reportedly being treated at Kumamoto hospitals.

Note: according to an expert, this Magnitude 7.1 quake is the actually the main quake (and the April 14 quake was merely a precursor).

Even newer homes could not withstand the force of the tremors, and fire from ruptured gas lines engulfed many communities.

In the Kyushu region of Japan, damage from spreading in the big earthquake of 3 consecutive days!（日本の九州地方、大地震で被害拡大！） pic.twitter.com/mCSstBVYku

Frightening scenes of the earthquake and its aftershocks were captured on television:

Large aftershocks were ongoing, even as local media tried to transmit news about the earthquakes.

Tokyo Metropolitan University researcher Hidenori Watanave, who recently helped launch an innovative mapping tool that examined the aftermath of the 2011 Tohoku Tsunami, used another tool — typhoon.mapping.jp — to examine the scale of the earthquakes occurring in northern Kyushu at this time.

The intensity of the earthquake epicenters is expressed as colored circles. I haven't seen this sort of overlapping or clustering before. typhoon.mapping.jp

The second of the three quakes, which occurred at 12:03 a.m. local time on Friday, April 15, was regarded to be the “main quake”.

This earthquake (occurring at April 15, 12:03 a.m.) is the “main quake”, and yesterday's quake (which centered around Mashiki and Kumamoto) was a actually a precursor. The Japan Meteorological Agency has lifted a tsunami warning.

The third quake that occurred early in the morning of April 16 caught everyone off guard. Some experts have noted that there is no possible way to state when a “main” earthquake has occurred.

A “precursor” earthquake and a “main” earthquake can only be determined (well) after the fact. There is no way to predict when a major earthquake will occur (or when earthquakes will stop).

Geller, who posts in both English and Japanese, has been providing a steady stream of tweets that both inform and correct earthquake reporting.

Intensity = scale for shaking at one point.
Magnitude = size of quake (6.5 or so)
Not so large, but under the city https://t.co/4EQqlVFzC4

The maximum intensity (7) and the magnitude (about 6.5) appear similar, but actually these are completely different parameters. @rjgeller

Geller is known to be critical of the accuracy of Japan's system of earthquake prediction. Hiroko Tabuchi, who formerly covered Japan for the New York Times, highlighted Geller's skepticism:

In the aftermath of the earthquakes, Geller said:

Even though there is no way to predict earthquakes, the Japan Meteorological Agency still has a section devoted to “earthquake prediction.” Am I the only guy who doesn't understand why this is?

For now, many people in Japan are uneasily considering the possibility of whether or not Mount Aso, Japan's largest active volcano, located right in the middle of the earthquake zone, will erupt.

Kumamoto Earthquake: will earthquakes continue to occur one after another? Mount Aso's small-scale eruption releases cloud of ash 100 meters high.

Earthquake coverage can be followed on Twitter using the hashtags #地震 and #熊本地震.

This article has been updated, with thanks to Peter Durfee.