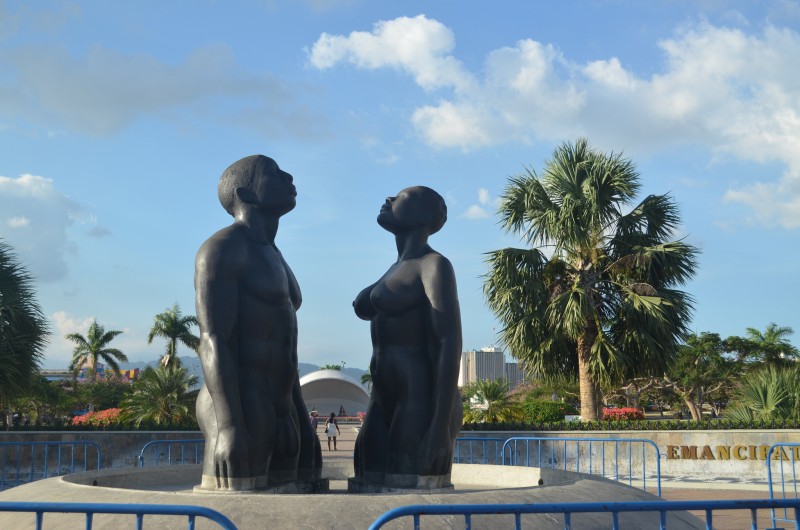 The sculpture at Emancipation Park in Kingston, Jamaica. Image by Kent MacElwee, used under a CC BY-NC-ND 2.0 license.

The idea of reparations for the slave trade is not new, but it has gained some traction—especially within the Caribbean region—over the last eight years. Guyana was the first CARICOM territory to lend its voice to the issue, calling on European nations who were involved in the Atlantic slave trade to pay compensation. Four years later, Antigua and Barbuda made a passionate plea for reparations at the United Nations:

To help counter the lingering damage inflicted on generations of peoples of African descent by generations of slave-trading and colonialism, we call on those very States to back up their apologies with new commitments to the economic development of the nations that have suffered from this human tragedy.

The following year, both Jamaica and Barbados established reparation commissions, charged with leading the lobby for both formal apologies for the horrors and inhumanity of slavery as well as economic justice for descendants of slaves. Now, with the visit of British Prime Minister David Cameron to its shores, Jamaica is once again in the front line of the reparations discussion.

But the UK is having none of it, its point being that slavery is “centuries old”. It will, however, spend 25 million British pounds (approximately US $38 million) to build a new prison on the island, ostensibly to house all the law-breaking Jamaican immigrants who come to Britain. Cameron explained:

It is absolutely right that foreign criminals who break our laws are properly punished but this shouldn’t be at the expense of the hardworking British taxpayer.

That’s why this agreement is so important. It will mean Jamaican criminals are sent back home to serve their sentences, saving the British taxpayer millions of pounds but still ensuring justice is done.

‘We merely ask that you acknowledge responsibility’

The regional blogosphere was not impressed; the revelation felt like insult on top of injury. Jamaica-based Annie Paul, in a Facebook status update, said:

The Brits paid compensation to planters after having built an empire off the backs of African people…
Now Cameron telling Jamaica to move on from slavery…he not paying reparations…but he willing to build a prison for Jamaica.
Your move Sistah P [Portia Simpson-Miller, Jamaica's prime minister].
‪#‎AssBackwards‬ 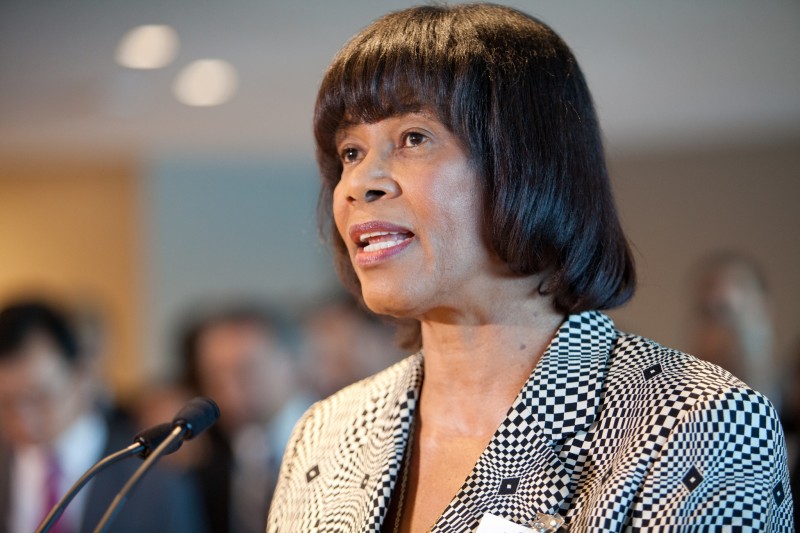 Prime Minister of Jamaica Portia Simpson-Miller, at the ceremony unveiling the winning design for the slavery memorial at the UN. Photo by United Nations Information Centres, credit to the UN Social Media Team, used under a CC BY-NC-ND 2.0 license.

Of course, Cameron is not the first British prime minister to avoid the reparations discussion — Tony Blair deftly sidestepped the issue in 2006 — but Cameron's family history makes the whole topic a tad tricker for him, since a distant relative was found to have profited from the slave trade — and in Jamaica of all places. One Twitter user addressed that point by saying:

Also we can't forget that British Slave owners were compensated for their “losses of property” after the Abolition. #Jamaica #Reparations

The concept of reparations is not unprecedented — a point duly made by Sir Hilary Beckles, the current vice chancellor of The University of the West Indies and chair of the Caricom Reparations Commission, who, in 2013, “urged Caribbean countries to emulate the position adopted by the Jews who were persecuted during the Second World War and have since organised the Jewish Reparation Fund.” This Twitter user echoed his sentiment:

Beckles, in addressing the UK's role in the slave trade and responsibilities to its descendants, said:

We ask not for handouts or any such acts of indecent submission. We merely ask that you acknowledge responsibility for your share of this situation and move to contribute in a joint programme of rehabilitation and renewal. The continuing suffering of our people, Sir, is as much your nation’s duty to alleviate as it is ours to resolve in steadfast acts of self-responsibility.

‘The Caribbean is due £7.5 trillion for slavery’

But the position of 10 Downing Street is that the prime minister “wants to look at the future”, not the past.”

Once it became clear that any talk of reparations was not going to be entertained by Cameron, Twitter exploded:

Many felt that it was important to keep the pressure on, regardless of Cameron's stance, and several Twitter users were pleased that Jamaica had the gumption to bring up what was a difficult conversation to have — socially, economically and politically.

THE National Commission on #Reparations (NCR) says the #Caribbean is due £7.5 trillion for #slavery. #Jamaica… http://t.co/hxxhfdO0hz

Jamaica's cause was getting support in the UK, and many netizens were sharing links about films dealing with the reparations issue.

‘If you think this is ’bout money, you wrong’

Detractors argue that for reparations to be a plausible request, it must be proven that descendants of slaves are still suffering the effects — economic and psychological — of slavery. Jamaican diaspora litblogger Geoffrey Philp's reply to this was in a poem, dedicated to Sir Hilary Beckles, called “Busha Day Done”:

Time show me I was wrong,
but I know that like justice, it longer than rope.
So, Busha, I not going bend: I not going give up hope.
And make me tell you plain: if you think this is ’bout money,
you wrong too. This is about Justice; your crime against my humanity.

For those who prefer less flowery language, this Twitter user put forward a clever summary of the argument for reparations:

A handy, easy to understand guide, for those for who dont get the #Reparations for #Jamaica debate. RT pic.twitter.com/bISz3OxIfR

There were a few voices crying in the wilderness, however, and Michelle Bradshaw at The Jamaican Blogs was one of them. In what is no doubt an unpopular stance, she supported Cameron's proposal to build the prison:

INDEPENDENT PEOPLE are supposed to find their own way. We cannot ‘cuss’ Backra Massah [‘Backra’ is a term for white plantation owners; ‘Massa’ a variant of ‘Master’] from one side of our mouth and then seek pittance from the other side.

Don’t curse Mr. Cameron, curse the tribalistic politics that has brought Jamaica to its current state from we received independence till now. For over 50 years we have been an independent nation and the only thing Britain can offer us is a BIGGER prison, and that for you is Jamaica’s political independence.

Not many netizens seemed to share her view; instead, they were uploading tongue-in-cheek YouTube videos about why Jamaica needs a new prison and arguing for investment in other sectors like education.

Jamaicans however, found the whole thing ironic. There have been widespread calls for the Jamaican government to reject Cameron's offer.