Zimbabwe's bloggers have a wealth of information on the week that was in the troubled southern African country. There are reports of more arrests and torture, an emergency monetary policy statement, and an indepth look at the myopic bigotry of some in the West with regard to Mugabe. First, a look at how South Africa's increasingly complicit role in Zimbabwe's crisis came back under the spotlight last week. This is Zimbabwe explains that it emerged that South Africa's national broadcaster SABC, is preventing its employees from accessing the web site of the independent Zimbabwean radio station SW Radio Africa:

Remember Snuki Zakalala, the Managing Director of SABC News and Current Affairs? The guy who has a problem with voices critical of Mugabe and Zanu PF policies..? Snuki Zakalala is the man who implemented an informal policy at the SABC (South African Broadcasting Corporation) to blacklist several highly credible commentators on the crisis in Zimbabwe, including Archbishop Pius Ncube, Moeletsi Mbeki, Trevor Ncube and Elinor Sisulu. This was an action that would have resulted in South Africans being deprived of full coverage of events in our country.

Well, this same man announced last week that the SABC would be opening a bureau in Zimbabwe. He commented, “We felt that it is important to have a presence here so that we cover the true Zimbabwean story”. Note the inclusion of the word ‘true‘, which in itself implies that the news currently coming out of Zimbabwe is a lie.

SW Radio Africa‘s transmission into Zimbabwe are currently being interfered with by the Zimbabwean government. Apparently, progressive South Africa deems it fit to follow in the repressive footsteps of their neighbors to the north. So much for press freedom in South Africa.

Power to the people protest

The famous Women of Zimbabwe Arize (WOZA) held an unannounced “Power to the people” sit in protest at the local offices of power utility Zimbabwe Electric Supply Authority (ZESA):

The protests at Magwegwe, Entumbane, Nketa 6 and Mpopoma took place without incident and the participants were able to disperse before police arrived. At Pumula, approximately 70 members as they were dispersing (the police station is next door to the ZESA office.) They were taken to Pumula Police Station before being transferred to Bulawayo Central Station.

At Luveve, members had protested and were beginning to disperse when police arrested people some distance away from the ZESA office, as they were catching transport back to their homes. Approximately 20 people are being held at Luveve Police Station.

At Nkulumane, nine people were arrested at the ZESA offices and are being held at Tshabalala Police station. Lawyers have been called and are trying to get access to those arrested.

The protests signify the launch of the ‘power to the people’ by March 2008 campaign. Today’s protests began with members queuing up as the offices made to open. They then marched in and handed over protest notes and either sat or stood inside and outside the offices until addressed.

In Luveve and Entumbane, officials attempted to divert the protesters by saying someone was coming to address them whilst making hasty calls to the police station. In Nkulumane, nine members were loaded into a cream Nissan pick-up, registration 846-101 Z by plain-clothed officers.

Those who were arrested, some of them with babies, were tortured and denied access to their lawyers while in police custody:

Three of the 56 members arrested in Harare on Monday have been hospitalised following the beatings they received in custody by Law and Order officers in Harare Central Police Station. Almost all of the 56 required medical treatment. The baby received medical attention but was not hospitalised. It also appears that some injuries were received when one of officers involved walked all over the members as they were lying face down on the floor.

Don't come back to Zimbabwe, traveling on a “chicken bus”

Taurai Maduna at Kubatana relates the pressure that Zimbabwean young professionals face to leave the country:

I’ve just received a reply to an email I sent to a friend informing them that I had been offered a fellowship to study at the prestigious Radio Netherlands Training Centre (RNTC).

All he said was good luck in your studies and don’t come back until there is CHANGE. He added ‘find something else to do there to kill time’.

I just laughed off his suggestion and I wondered how do you kill time in Amsterdam after you have over stayed?

In June last year, I spent a week in Amsterdam where I was taking part in a seminar called Expression Under Repression organised by Hivos. Before my return home, I took a stroll in the city famous for it’s ‘red light district’. I met a guy from Sierra Leone, at first I thought he wanted to con me, but then I realised he was just trying to be friendly.

He told me about his wife and three kids and how he was struggling to get his asylum papers in order. He said his main challenge was the Dutch language as he was supposed to be fluent if he was to pass the integration test. This guy had been there for over four years.

My ‘guide’ then asked me if I was planning to return to Zimbabwe. I told him yes, I’m going back. He was dejected probably wondering how stupid I was not to stay.

Meanwhile Natasha, who took an urgent trip on a “chicken bus”, describes the experience:

From the back of the bus a loud, desperate voice started singing something that sounded gospel. The voice belonged to a disheveled blind woman being led by a similar looking girl most certainly less than 10 years old. The two were struggling to make their way to the front of the bus, begging each passenger for money.

When the pair got to me, I heard the young girl whisper to her mother, “apa pane murungu, ndotaura sei?”- translated loosely – “here is a white person, how do I communicate with her?” I got offended not at being called white, but at her failure to realize I was just a light skinned person who is one of them. While I’m better dressed, the fact that I was also in this bus that’s cheap indicates that I’m also struggling, just like them.

Slowly I began to subconsciously direct my anger elsewhere: towards the forces that have reduced most of our people to dirty beggars; towards the egotistical few that have enriched themselves and destroyed our economy making sure everyone else lives below the poverty datum line. I looked around the bus and thought – these are the real Zimbabweans, and among them were the real freedom fighters who ought to be the ones crying out – “We fought for this country!” Yet they are the very ones who occupy the bottom rung of society.

Threats by Western Universities under scrutiny

In “Mugabe, the West, and ‘servile’ Zimbabweans,” Zimpundit scrutinizes the integrity of threats by western universities to rescind Mugabe's honorary degrees:

What doesn't make sense is for people, you know who you are, who now claim to have always seen through Mugabe's facade yet they said nothing when he was celebrated as Africa's greatest statesman through the 80's and 90's, to now want to distance themselves from any indication that they too, where once enamored by him.

It will always remain a mystery to me exactly what grounds these pseudo-critics of Mugabe base their attacks on him, and even worse on people like myself who are only exercising our prerogative when we say this: Fact; the quality of life of many of my countrymen improved drastically immediately after independence in 1980. Besides if they were really about democracy and freedom of expression, who are they to deny the opinion held my many Zimbabweans? Isn't that what democracy is all about; “E Pluribus Unum.” 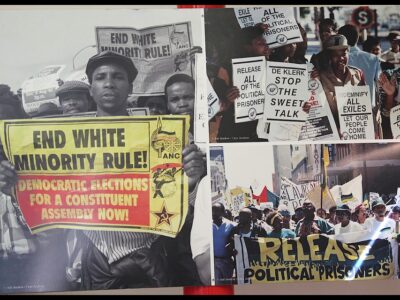