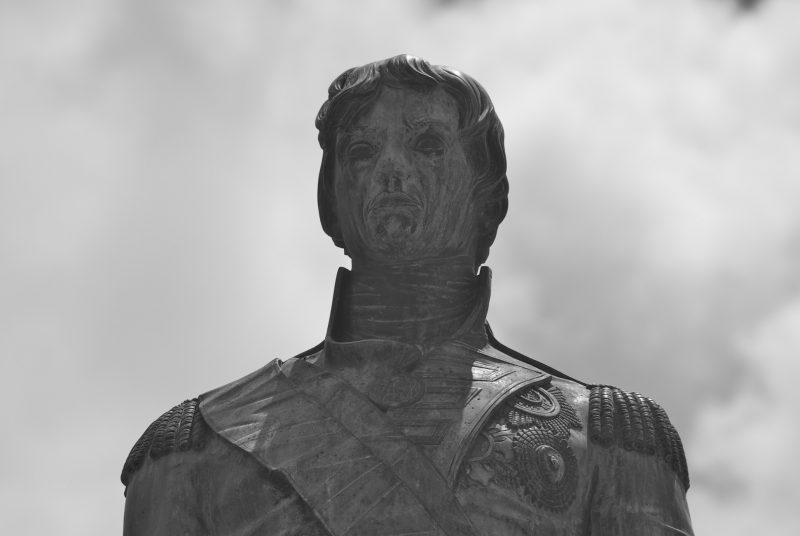 The statue of Vice-Admiral Horatio Nelson, which stands near the entrance to Bridgetown, the Barbadian capital. Photo by Nick Kocharhook [1] on Flickr, CC BY-NC 2.0 [2].

Black Lives Matter [3] (BLM) protests have seen a global resurgence following the killing of George Floyd [4], an African American, by a white police officer in Minneapolis, Minnesota in the United States.

One ripple effect of the protests has been the denigration and defacement of symbols of black oppression. The Caribbean, with its long history of occupation, has its own symbols of oppression to reconsider.

In Richmond, Virginia, on June 2, hundreds of protestors assembled [5] in front of the statue of General Robert E. Lee, a American Civil War Confederate general, shouting, “Tear it down!” The state's governor, Ralph Northam, announced [6] that the statue of Lee would be removed; the process has since been blocked [7] by a court order.

On June 7, United Kingdom protestors tore down a statue [8] of Bristol slave trader [9] Edward Colston and stomped on it before throwing it into the harbour. A statue of slave trader Robert Milligan was also retired [10] in front of the West India Docks [11] in London.

Some have supported [12] the symbolic act of reclaiming dignity and exposing long-celebrated racists, while others have condemned this method of protest.

In the Caribbean, calls to rename certain places have surged. King George V Park [13] in Port of Spain, Trinidad, for instance, is also called Nelson Mandela Park. However, statuary has largely remained.

Most regional territories have robust examples of public art that honour the slave struggle, including Bussa [14], who led the largest slave rebellion in the history of Barbados; Cuffy [15], the leader of a 2,500-strong slave revolt in Guyana; and the “Redemption Song” statue [16] at Jamaica's Emancipation Park, but there are also myriad examples of statues that reinforce the tainted narrative of discovery and ownership.

Several Caribbean nations are challenging the wisdom of having such statuary on public display. Feminist and university lecturer Gab Hosein observed on Facebook [17]:

I don’t think there has been a global uprising of this geographical scope and diversity since the 1970s. […] Sparked by the BLM movement in the US and now expanded into decolonial struggle and dismantling racism more broadly, it does seem like — for almost the first time in 50 years — we are listening to another world breathing.

In Martinique, where a statue of French abolitionist Victor Schoelcher was toppled, two of the young women involved explained [18] their decision in a YouTube video:

We, the young people of Martinique, are sick and tired of being surrounded by symbols that insult us. We were not the first to attack these symbols. Many before us have tried in vain to get rid of them […]

What is a statue? It is stating this is someone we admire for the impact he or she has had in the course of our history. […] Schoelcher was in favour of the compensation of the plantation owners; there are many transcripts proving that claim. If he had not, maybe it would have been different.

As the pair pointed out, the discussion is not new.

Barbadians, for instance, have been agitating for the removal of a statue of Horatio Nelson [19] for decades [20]. In 2017, Sir Hilary Beckles, vice-chancellor of The University of the West Indies and chairman of the Caribbean Community's (CARICOM) Reparations Committee [21], referred to Nelson [22] as “a vile, racist, white supremacist [who] disposed of black people, and dedicated his political and military life to the cause of protecting Britain’s criminal possession of the 800,000 enslaved Africans held during his lifetime.”

In the wake of Floyd's horrific murder, the discussion around such monuments has grown more urgent [23].

There are currently several online petitions circulating in the region, including the Barbadian thrust to do away with Nelson's presence [24] in the nation's capital.

[…] while I don't think to destroy the statue of Nelson is useful, I do think that relocating it to the museum or somewhere outside of National Heroes Square is viable and worth a national discussion. It is no longer called Trafalgar Square and he is not a hero. Wherever his statue is relocated to, it should include complete signage to clearly demonstrate who he was, what he did and his role in the colonial machinery that oppressed people.

In response to a commenter who challenged the idea of taking down the statuary with a “Where will it end?” argument, Davis clarified [26]:

I don't believe that our tourism product should only tell the story from the perspective of those who enslaved people. There is a term being used around the world called ‘dark tourism’ and this is used in places like Auschwitz for example, to speak about concentration camps and tell the uncomfortable narratives that we want to turn away from. 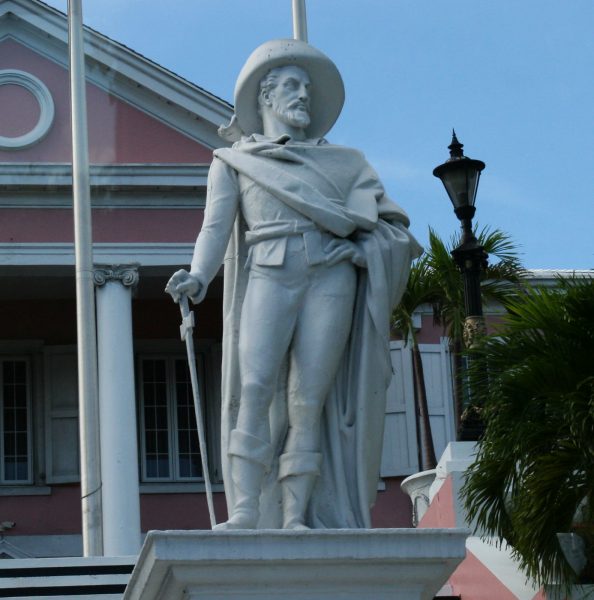 The statue of Christopher Columbus which sits on the entrance steps of Nassau's Government House. Photo [27] by Robert Karma on Flickr, CC BY-NC-ND 2.0 [28].

Meanwhile, in the Bahamas, more than 3,000 people have signed a petition [29] advocating for removal of the statue of Christopher Columbus, which looms over the front steps of Nassau's Government House.

A petition in Trinidad and Tobago agitating for the removal [30] of two Columbus statues, explains [31]:

We must face the fact […] that we continue to publicly glorify the murderous colonizer who initiated two of the greatest crimes in human history: the genocide of the Indigenous people of the Caribbean and the Trans-Atlantic slave trade, both of which are at the root of the racial injustice that our generation is protesting today.

Musician and actor Nickolai Salcedo, who publicly shared the petition on his Facebook page, asked [32]:

Hey wouldn’t it be a cool bit of foresight if instead of waiting for a mob to tear down the statue of Columbus in [Port of Spain], the government was to preemptively remove it followed by removing any homages to our colonial past? […]

Our society […] still has monuments […] that literally litter and stain our landscape. Time for these monuments to the bloodthirsty to meet their blind dates; the sledgehammer of justice.

We can't pick and choose history, this is a significant part of history — Keep it, not glorify it — attach the correct story to it — hostile takeovers must always be remembered for the damage they are responsible for.

Journalist Judy Raymond, however, commenting on the removal of the Milligan statue, read the pulse [34] of the matter very accurately:

[People] see a statue & assume that must be a great man. A plaque on an empty plinth might be more appropriate & useful. This is a discussion about visual memory.