‘Born fi dead': The Caribbean looks at the George Floyd protests and sees itself

'[It's] about systemic oppression, structural, economic, social and physical violence' 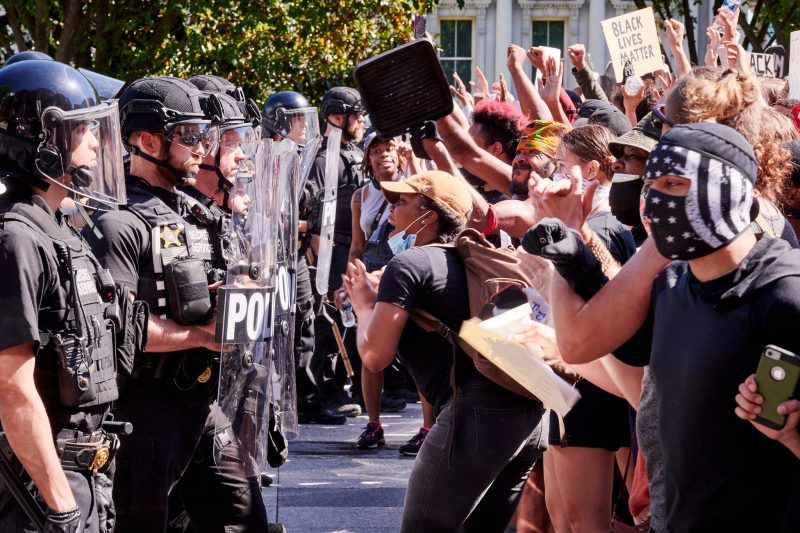 George Floyd protest by the White House on May 30, 20. Photo by Geoff Livingston on Flickr, CC BY-NC-ND 2.0.

As Jamaican reggae pioneer Bob Marley declared in his song “So much things to say”: “Remember that when the rain fall, it don't fall on one man's housetop.”

The horrific May 25 killing of George Floyd, one of many African-Americans who have died at the hands of the police, is reverberating strongly throughout the Caribbean, a formerly colonised region still grappling with the legacy of its own history of race-based oppression.

‘This is our cause’

Quite apart from the common Caribbean saying, “When the United States sneezes, the Caribbean catches a cold”, which speaks to the mammoth influence — economic and otherwise — that the country wields over the region, many West Indians have played an active role in the black struggle in the United States, notably pan-Africanist and Jamaican national hero Marcus Garvey; Trinidadian Kwame Ture, a prominent figure in the American civil rights movement; and Malcolm X, whose mother was Grenadian, and whose parents were active in Garvey's Universal Negro Improvement Association and African Communities League (UNIA).

Vice-Chancellor of The University of the West Indies (UWI), Professor Sir Hilary Beckles, who has been at the forefront of the region's reparations campaign, released a statement which recognised this intertwined history:

From that horrible history when Europeans stole 15 million of our ancestors from Africa and scattered them across plantation America—the Caribbean getting the lion’s share—shattering family bonds, the future was cast in the concrete again, in which the face of George was crushed. […]

It is this culture of centuries upon which the American nation is built that continues to choke the air from black lungs. […] This is our cause.

All across the archipelago and throughout the diaspora, social media users were paying attention. While some wondered why Caribbean people were concerning themselves with American problems [many such comments have since been deleted], and others suggested that the US experience cannot be transposed into the complexities of the Caribbean context, many made connections between America's systemic racism and the region's.

Even as she urged fellow social media users not to police “those of us who can elevate our thinking beyond insular nationalist concerns”, Trinidad-born, UK-based attorney Margaret Rose succinctly summed up the crux of the matter:

For those who have eyes to see the issue playing out in America today is not only about police brutality and it is not only about America. It is a manifestation both literally and metaphorically of the meta-crisis we are all experiencing worldwide. It is about systemic oppression, structural violence, economic, social and physical violence perpetuated through an indifferent global economic system that operates to reward the accumulation of wealth with power. […]

Derek Chauvin’s knee was not just a white man’s knee casually crushing the breath of life out of a black man. Chauvin is an instrument of system enforcement against George Floyd who represents the poor, the powerless, and the downtrodden in society.

In that vein, the irony of Jamaicans being scandalised at Floyd's murder was not lost on blogger Annie Paul. The Jamaica Constabulary Force often operates with impunity in its violence against residents of low-income communities:

I see the outrage being expressed on local social media re #GeorgeFloyd but honestly? I don’t think the way Jamaican police treat poor youth here is any better. They are socially black in the Jamaican hierarchy and ‘born fi dead’ as far as police are concerned. #Selectiveoutrage

In the time of a global pandemic, when the possibility of death looms large, several commentators acknowledged that it is no coincidence such societal unravelling is taking place at the same time. Margaret Rose noted:

COVID-19 began the systematic dismantling… this is part of the COVID-19 domino effect.

On June 2, in solidarity with the black American plight, many Caribbean netizens changed their profile photos to a black screen for Blackout Tuesday, a collective action by the entertainment industry that was taken in protest over police brutality against people of colour.

The move came in the wake of the killings of not only Floyd, but also Ahmaud Arbery, a black jogger who was murdered by two white vigilantes, and Breonna Taylor, an unarmed black woman killed by the police in her home. The Black Lives Matter movement later explained how the show of support was actually hurting its own efforts by hijacking the #BLM hashtag and steering traffic away from the organisation's attempts at education and dialogue.

Caribbean Twitter, meanwhile, was filled with testimonies of home-grown racism:

Racism is so prevalent in Trinidad and as a DARK SKIN AFRO TRINI WOMAN, I just want yall to know that the people that don't see it are privileged.

Racism doh exist in Trinidad but I know rel fellas who didn’t want a black gyul because they didn’t want “nappy head” chirren eh…but anyway back to y’all in the studio pic.twitter.com/2ymBx6JHRn

In the multicultural society of Trinidad and Tobago, where the two main ethnic groups comprise people of Indian and African descent, social media users pointed out that even the country's politics are race-based, that hatred between the two groups was used historically as a colonialist tool of control and manipulation, and that spin-off prejudices spring from racism, rooted in ignorance.

Isaac Rudder, a black Trinidadian, released an exposé about a racist WhatsApp group which he was curiously invited to join, run by Indo-Trinidadians. [Warning: The screenshots posted by Rudder contain disturbing and upsetting language.]

‘I'm not dealing with a race issue’

In Trinidad and Tobago on Blackout Tuesday, expressions of racial intolerance reached fever pitch with many commenting on the situation less from the point of view of Floyd's killing and more from the perspective of the ensuing social unrest. Facebook user Dené Voisin responded:

I find TOO MANY TRINIS […] have TOO MUCH TO SAY about ‘riots’ and ‘looting’ being uncivilized and how you don't respect it. If it wasn't for the Canboulay riots there would be no Carnival.

Stop being myopic about your own history when people are fighting for their lives.

Adding fuel to the flame were the social media posts of a few business owners who felt the need to weigh in. Michael Patrick Aboud, a local businessman of Syrian descent and already a controversial figure due to his arrest on arms and drug-related offences, posted on Facebook that protesters in the United States were using Floyd's death as an excuse “to do what comes natural”. He later issued an apology saying his post was misinterpreted.

This was soon followed by other tone-deaf social media status updates, including an Instagram post — since taken down — by tea shop owner Dianne Hunt that declared “All Lives Matter”, and a Facebook post by businessman Gerald Aboud who defended Hunt's right to say what she did and admonished black people to “rise up” from their “state of mind”.

Hunt later said that she was “unaware [that] ‘All Lives Matter’ was contradictory to ‘Black Lives Matter'”, but then shifted the blame for the phrasing onto a staff member: “My waitress wrote it. It was a Black girl who wrote it.”

‘What is it going to take?’

The focus for many, however, remained on speaking their truth and finding solutions.

Sarah Chong Sing, a member of the Caribbean diaspora living in the United States, shared her experience about living as a woman of colour in Minnesota, the state in which Floyd was killed:

The one-dimensional way that POC are seen there was shocking – we were treated like criminals more times than I can remember – cops were called for us at least twice that we know of, and we were harassed by them a number of times beyond that. The only place that we felt ‘safe’ and ‘human’ was when we visited Native American reservations. Not even the Catholic Church there was able to give us that. […] All that being said, I have hope for the younger generations in Minnesota, but it will definitely take some time.

Renee Cummings, a Trinidad-born criminologist who resides in New York, asked on Facebook:

Answers ranged from “Murder convictions for all the cops present” [at George Floyd's murder] to voting out President Trump — but Caribbean people know the answer lies much deeper than that.

A good place to start would be to explore the resources that netizens have been sharing which, in Facebook user Caroline Taylor's words, “may help some people better understand, and help ease the burden of constant explanation”.

Her list includes works by playwrights Anna Deavere Smith and August Wilson, films by Ava Duvernay, and protest music by Nina Simone, all of which, she admits, “scratch the surface”.