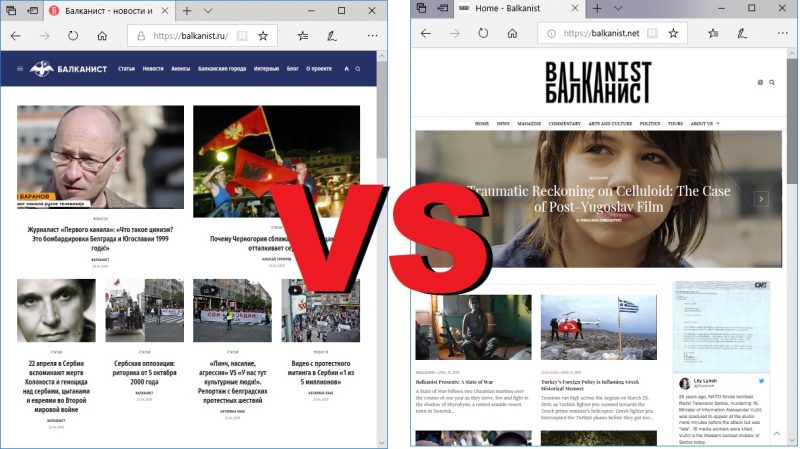 This story originally appeared on Meta.mk News Agency [1], a project of Metamorphosis Foundation. An edited version is published below as part of a content-sharing agreement.

The newsroom of Balkanist.net [2], a media outlet based in Serbia covering the Balkans, was surprised to find out that they have a Russian-language doppelganger (Balkanist.ru [3]) with an opposite editorial policy.

Balkanist.net is an English-language outlet which since 2013 publishes news and analyses about the Balkans and Eastern Europe written by international contributors. Their website says they are “entirely independent, self- and reader-funded, and are not affiliated with any organization, company, or government institution.”

In turn, Balkanist.ru was founded in September 2018 and publishes analyses by “authoritative Balkanists from Russia” with the stated objective of “influencing Moscow’s policies in this troubled region” — according to its “about the project” page. The website's logo features a cormorant, which is called baklan in Russian. There isn't any info about the website's funding sources. 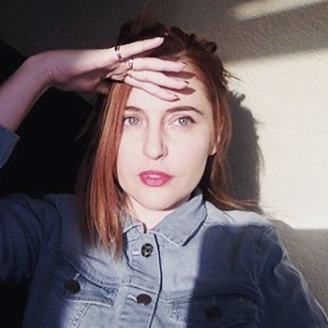 Balkanist.net's editor-in-chief Lily Lunch has told Meta.mk that “the Russian-language site has nothing to do with our publication.”

On social networks in Serbia, the appearance of a Russian version of the Balkanist was seen as another attempt to peddle propaganda for the Serbian government Aleksandar Vučić, this time aiming at the Russian public.

For instance, the analyst Miloš Popović commented on Twitter:

Serbian President got his mouthpiece in Russian. It's called @balkanist2018 [4] and it stole name from the original Balkanist (@Balkanist [5]).

In an official statement [7], Balkanist.net alleged that their Russian namesake is a pro-Vučić propaganda site:

It’s not surprising to us that a pro-Vučić propaganda site would use our name and brand to publish well-constructed lies in Russian. For years, the regime has sought to eliminate each and every independent voice the country has left. It has a variety of tools at its disposal to accomplish this. One of its most well-worn tactics is spreading confusion and lies about critics. The purpose of publishing under the name Balkanist in Russian is to confuse readers at home, in Russia and elsewhere into questioning our sincerity, what and who we support, and what and who we believe. In this way, they hope to, at a minimum, diminish the impact of any future criticism (and there will be future criticism – a lot of it). They also know that we are critics not only of the Vučić regime, but of the European Union and NATO. Unlike Vučić’s ministerial choices and economic policy, our editorial line is not dictated by the US embassy. This makes the name Balkanist a logical vehicle for the dissemination of Vucic’s lies in Russia.

Also according to the “about” page of the Russian website, its manager Oleg Bondarenko has served as adviser to several top Serbian politicians in previous years: former president of Serbia Tomislav Nikolić [8], his former protegé and current president Aleksandar Vučić, and Milorad Dodik [9], the pro-Kremlin strongman of Republika Srpska, the Serbian entity within Bosnia and Herzegovina.

Bondarenko is also a prolific commentator on pro-Kremlin media. In early 2018, he was barred [10] from entering the EU and turned away at Berlin's Tegel airport at Poland's request.

Other names on Balkanist.ru's editorial line-up include academics and political scientists from the Russian Academy of Sciences specializing in the Balkans and even one rock musician whose band, BalkanMusicLab, plays covers of Yugoslavian rock hits in Moscow clubs.

Similar impersonation tactics were common in neighboring North Macedonia during the government of the VMRO-DPMNE [11], a conservative party that presided over 12 years of democratic decline before it was ousted in the 2016 elections.

The website Kurir.mk, for example, founded in 2010 and to this day a leading VMRO-DPMNE mouthpiece, shares its name with the Serbian site Kurir.rs, a very popular tabloid at that time.

In 2016, the Serbian publisher Adria Media Group penned a statement titled “Fake Kurir deceiving readers in Macedonia [12]” in which it threatened to sue the Macedonian site for stealing its brand.

AGM noted that the owner of the copycat site was the firm EM medija d.o.o. based in Skopje. The statement alleges that the firm has ties with Saša Mijalkov [13], the former chief of the Macedonian secret service, and a first-cousin of then-Prime Minister Nikola Gruevski.

In May 2018, the investigative media outlet Organized Crime and Corruption Reporting Network revealed [14] that EM medija d.o.o. had been partly purchased by Hungarian companies with close ties to Prime Minister Viktor Orbán along with several other outlets [15] in North Macedonia. In June 2018, the Hungarians became the sole owners [16] of EM medija d.o.o.

Similarly, when pro-government television station TV Nova (tvnova.mk) was founded in 2015, it was given the same name as the independent outlet Nova TV [17] (novatv.mk), founded in 2011. Nova TV's journalists have faced constant attacks by government supporters during that time, and in 2015 its editor received a death threat [18].

The owner of the now-defunct [19] TV Nova is currently under investigation on various charges of corruption and organized crime in cooperation with the former government.

A third example happened in 2016 when individuals with ties [20] with VMRO-DPMNE officials opened dubious news websites in Croatia (alo.com.hr) and Serbia (saznajemo.rs) with names similar to established cross-border online publications. Ahead of the November 2016 elections, they published articles with baseless treason accusations against the then-opposition leader Zoran Zaev. Mainstream, party-controlled media then disseminated these false allegations as relevant news from supposedly reputable foreign outlets.

A recent investigation by Macedonian online outlet SDK revealed that the administrator of those websites started a job in the state-owned company [21] ESM — Power Plants of North Macedonia around that time. He holds the same position to this day.

Smaller, local media sympathetic to the government at that time used the same tactics. A local TV station in the southern city of Strumica was named Telekanal A1 [22] when it was created in 2014, the same name of the national TV station A1 TV which in 2011 was shut down [23] by Gruevski's regime.

In August 2017, the new government of North Macedonia cut funding to private media, and many of such pro-VMRO-DPMNE outlets have been gradually closing down since. According to information by the broadcasting regulator [24], TV Nova and Telekanal A1 folded in August and March of 2018, respectively.