Hungary’s regime is exporting instability and propaganda to the Balkans 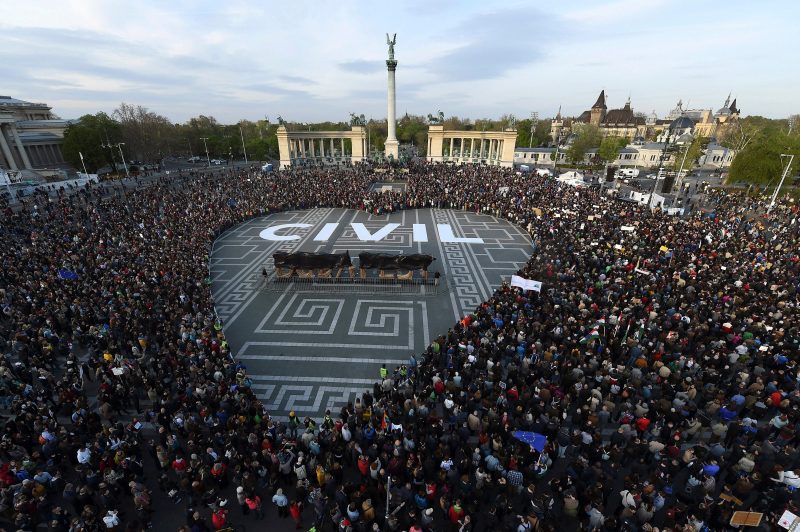 Protest against the law aimed at closing down Central European University (CEU) and in support of civil society on 12 April 2017 in Budapest, Hungary. Photo by Open Society Foundations, CC BY-NC-ND.

An investigation conducted by independent Macedonian news outlet Nova TV has found that some of the media that drove right-wing populist propaganda in Macedonia during the tenure of the Russia-supported VMRO-DPMNE (2006-2017) administration were financed through Hungarian crony companies.

These outlets have recently been showing banner ads for websites owned by a Slovenian company, Ripost Založništvo d.o.o. Some of the ads redirect to RipostMk.com, a little-known Macedonian-language media outlet whose editors and staff remain anonymous. It's owned by Ripost, with a domain admin with an email address from the Hungarian consulting company netlight.hu. 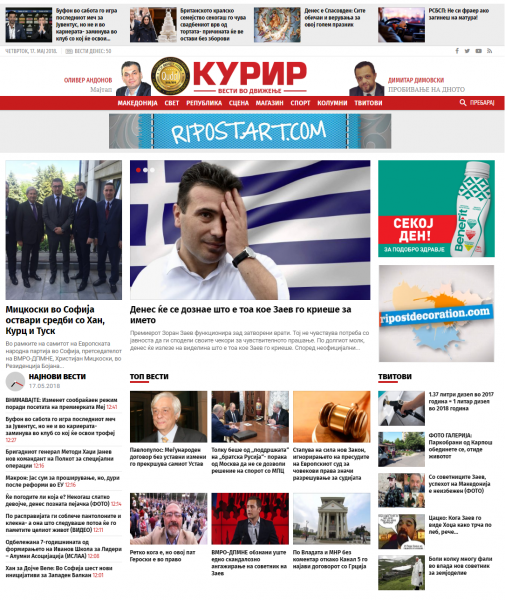 Screenshot of the front page of Kurir.mk with two ads for Ripost websites, and a main article associating Macedonian PM Zaev with Greece in the context of the name dispute.

With help from Slovenian colleagues, Macedonian journalists obtained data from the Slovenian central registry showing that Ripost is owned by a Hungarian citizen, Péter Schatz. In July 2017 Schatz became a co-owner of Macedonia's Alfa TV, while in Slovenia he acts as a representative of a group of Hungarian companies, including Modern Media, which is financed mainly by the Hungarian government through ‘public interest’ media campaigns. Modern Media has received a large chunk of the 40 million euros spent by the Hungarian government on anti-Soros propaganda in 2017. (Editor's note: Global Voices is a grantee of the Open Society Foundations, founded by George Soros).

What kind of sites has been supported by Hungarian capital?

In recent years, Macedonian media outlets benefiting from Hungarian ads and ownership have been linked to controversies regarding their often secretive ownership, transparency of their newsrooms and financing sources, and their lack of adherence to the Code of Journalists.

For instance, Kurir.mk is generally considered the unofficial mouthpiece of the Center for Communication of former ruling party VMRO-DPMNE. Most of its articles are not signed and allegedly written by party apparatchiks.

In the early years of its existence, Kurir.mk was mainly financed with Macedonian taxpayers’ money, through public procurement contracts for “audiovisual services” such as live streaming events for state institutions. These contracts were all just below the 5000-euros threshold that allows procurement through a public tender. State bodies and state-owned companies provided supplementary support by purchasing banner ads.

According to the investigative project Mediapedia, the original owner of the news site Republika.mk was an offshore company registered in Belize whose proprietors remain unknown. Ownership was inferred from the fact that the shell company was registered at the same address as other companies linked to powerful Macedonian oligarchs and government cronies. The outlet actively persecuted activists and independent journalists by publishing defamatory articles. The Directorate for Personal Data Protection confirmed that Republika.mk made use of personal data obtained illegally by state institutions, and that some of their intended victims sued the outlet in 2016. The courts are yet to pass judgment on the matter.

Alfa TV was founded in 2008 by a businessman affiliated with the then opposition as an urban television station and built its reputation on professional reporting, cultural coverage and high-quality film programming. After a hostile takeover in 2013, the station attracted a string of domestic and foreign (Serbian and Hungarian) owners, alleged proxies of the ruling party. The station shifted its programming to entertainment based mainly on turbofolk music and the original news staff were either fired or forced to resign.

Complaints against the media outlets above comprise a significant percentage of the decisions of the Council of Media Ethics of Macedonia, an independent media self-regulation body that determines violations of journalistic standards. Of 124 complaints made against 42 media outlets and processed between December 2014 to October 2016, 14 % were about Kurir.mk, 6 % were about Republika.mk, and 2 % about Alfa TV.

Among the democratic reforms introduced by Macedonia's current government—and recognized at the highest levels of the EU— is the banning of government advertising in domestic media, which had been common practice during the tenure of the right-wing VMRO-DPMNE. It was, in fact, public outrage at pervasive high-level corruption, including electoral fraud, that resulted in a change of government in Macedonia in the elections of December 2016—though VMRO-DPME delayed transfer of power for almost half a year, bringing the country to the edge of civil war in April of 2017 by organizing a bloody attack on parliament. But popular support, the level-headedness of the then opposition and an EU-led political process prevailed and ended the long-term political crisis before it escalated too far.

Hungarians might not be so lucky in the short run. Prime minister Orbán’s Fidesz party used the full might of the state and the capital accumulated through cronyism to win the parliamentary elections in April 2018 and has started implementing its promised ‘revenge’ against all who espoused different opinions from them. Like VMRO-DPMNE, with which it has long-standing ties, Fidesz has blurred the lines between party and state, subjugating state institutions and resources to party interests and fostered an atmosphere of fear using polarization and nationalism as key propaganda weapons.

In Macedonia, such strategy included campaigns against refugees, the free press and “the West”, civil society organizations (CSOs) and the Hungarian-American philanthropist George Soros, whose name has replaced “Rothschild” as the symbol of the implied ‘Jewish threat’ in the world of anti-Semitic hate speech and anti-Western conspiracy theories.

In Hungary, Fidesz's first targets have been Soros’ Open Society Foundations (OSF) and Central European University, with the few remaining free media and the judiciary running a close second and third.

Alongside conventional philanthropic support, starting from 1986, OSF has invested over 400 million dollars in rebuilding democracy in Hungary during and since the fall of its Communist regime. They recently announced that OSF would move their offices from Budapest to Berlin, in anticipation of the enactment of “Stop Soros” laws by the Fidesz party's parliamentary “supermajority”.

In a manner similar to Russia in 2012, the new regulations impose heavy taxes on civil society organisations receiving foreign funding and legalize various kinds of harassment aimed at stalling their daily work.

The European Union has initiated legal action to investigate and tackle the erosion from democracy within its member state Hungary. In the past, such efforts have been stalled by political maneuvering by the right-European People's Party, but European center-right parties are becoming more vocal about the need to limit the power of populist forces.