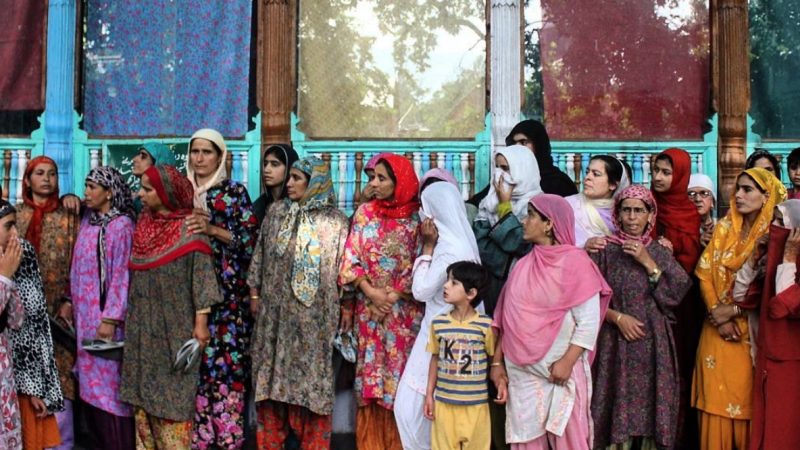 Group of women wait outside a shrine to see the dead body of a local militant commander killed during the gunfight with government forces in Jammu and Kashmir. Image via Instagram by author.

Indian-administered Kashmir, where a movement for self-determination has bubbled for decades, is on edge again after a string of deadly violence.

Thirteen suspected militants died in three separate gunfights [2] with government forces during anti-militancy operations in the conflict-torn region on Sunday, April 1, 2018. Three Indian soldiers were also killed during the battles.

At the time, clashes broke out near two of the sites as locals tried to disrupt the Indian army operations and help rebels escape. Soon after the news broke about the deaths of the 13, protesters, mainly youth, took to streets. Four civilians were then killed [3] after the Indian army opened fire on them in the Dialgam and Kachidoora villages of south Kashmir.

This is how newspapers appeared after the bloodbath.. #Kashmir [4] pic.twitter.com/Mxv3rSCm0m [5]

Another civilian died later in Gandarbal district during clashes with local police after the protests spread there. Local police initially claimed that he had been hit by some object during clashes, but doctors have ruled out the possibility, as he had a firearm injury to his head.

Murdered by Indian occupation forces. Gowhar Rather, 22, breathes his last at SKIMS. A whole metal pellet cartridge in his skull. Another dream nipped in the bud. Another family devastated. #Kashmir [4] mourns. pic.twitter.com/4VqLp2xhQf [7]

One of the civilians killed in Shopian leaves behind this 17 months old child. The tragedy called Kashmir. pic.twitter.com/1IAkvq3wtP [9]

And according to family [11], Mushtaq Ahmad Thakur, a civilian, was also killed during the firefight after the Indian Army had asked him to lead them toward a nearby house where suspected militants were hiding.

During a press conference, the Indian army characterized [12] the deaths of the suspected rebels as a “special day for counter-terror operations” to avenge the killing of Lieutenant Ummar Fayaz Parry, whose bullet-ridden body was found in the village of Herman Shopian in May 2017. Army officials said two of the alleged militants killed in an encounter on April 1, 2018 were involved [13] in his death.

Read more: The Kashmiri People Versus the Indian State [14]

Over the past three decades, the people of the Kashmir Valley have demanded the right to hold a referendum [15] on their independence. In that time, more than 68,000 people have been killed in sporadic uprisings and subsequent crackdowns. The Indian military has been accused [16] of numerous human rights violations, including the enforced disappearances of over 8,000 people [17]. 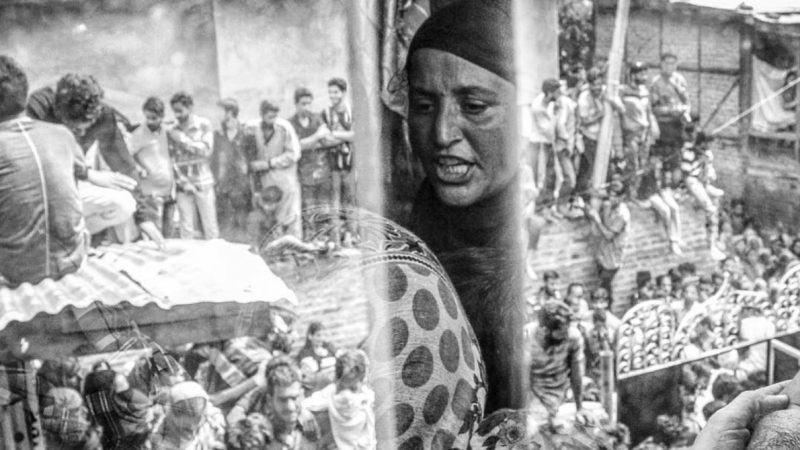 Reflection of a Kashmiri woman raising slogans is seen on a window as mourners wait outside the house of a militant, who was killed during a gun-battle with government forces in south Kashmir. Image via Instagram by author.

Reports say security forces used pellet guns on the protesters; more than 150 people have suffered injuries, with many of them hit by the pellets, some in their eyes. In the 2016 uprising, hundreds of young boys and girls either lost their eyesight completely or partially due to the pellets fired by government forces [19].

Kashmiri resistance leaders called for a widespread shutdown [20] in the Kashmir valley on April 2; following that call, authorities shut down mobile internet and imposed a curfew. The government also ordered schools and colleges to remain closed and canceled or postponed [21] several exams as the situation remains tense.