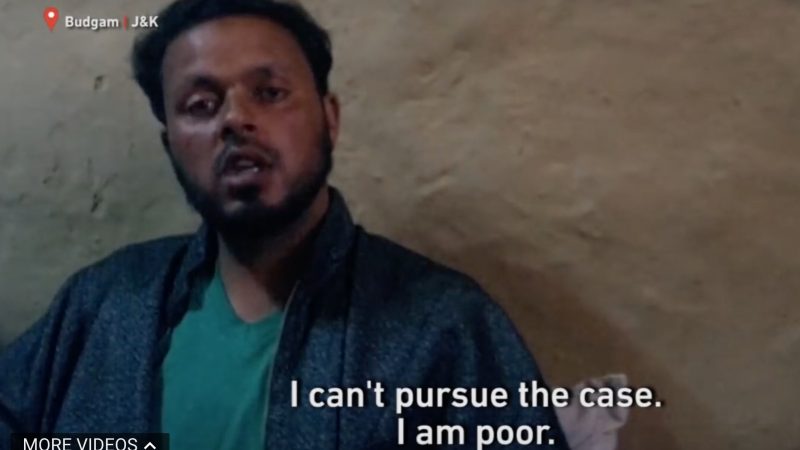 This post was written by Madhura Chakraborty and originally appeared on Video Volunteers, an award-winning international community media organization based in India. An edited version is published below as part of a content-sharing agreement.

This is a horrid tale of a 26-year-old shawl weaver from the Indian-administered territory of Kashmir, who was tied to the hood of an Indian military vehicle as it patrolled villages on a recent voting day. The video showing Farooq Ahmad Dar being used as a “human shield” against demonstrators pelting stones went viral and drew outrage from local and international quarters (see Global Voices report).

My mother wants me to go see a doctor. But I am afraid of going to a hospital. I’m afraid they will find me and kill me…I haven’t stepped outside my house in the last eight days.

Watch the full interview below:

On April 9, 2017, a by-poll election for a vacant seat in the lower house of the Indian Parliament Lok Sabha was held amidst fierce protests from civilians and a heavy presence of armed security forces. Farooq, who lives with his mother in a village in the Budgam district of the valley, left his home at 8 a.m. to go cast his vote. On his way back from the polling booth, he intended to visit a relative’s home. But he would instead return home late that evening, traumatized and with injuries. He had become one more casualty of the impunity that the armed forces enjoy in Kashmir.

Farooq was stopped by armed personnel from the 53 Battalion of the Rashtriya Rifles, a part of the Indian Army. He said he showed them his finger, marked with the indelible ink – certain proof of his having cast a vote. Despite this, Farooq said they beat him up brutally. But this was only the beginning of his ordeal. Following this, he was tied to the front of the army jeep and paraded through multiple villages for almost 30 kilometres.

“They treated me like a football. I am a human being, not a toy,” he asserted in his interview. A bystander shot a video which went viral on social media. In the shakily shot mobile footage, one can clearly hear the military personnel announcing over a megaphone “This is what will happen to stone pelters,” apparently trying to make an example out of him.

Only, Farooq said he was no stone pelter. He was just one of the 6.5% of the electorate in the state that turned up to vote on April 9 – a day marked by deadly protests, in which eight demonstrators were killed when the army opened fire. He’s part of the minuscule population of Kashmiris who still choose to place their faith in democratic processes, despite the fact that fundamental rights protected by the Indian constitution such as the right to life and equality before law and freedom from arbitrary arrests have been routinely violated over the last 27 years.

This is not the only such video to have emerged in the last month or so from Kashmir. Several videos of armed forces reprortedly beating or torturing Kashmiri youth are circulating on social media, some of them apparently shot by army personnel themselves. The cyber crime cell of the Jammu and Kashmir State Police in Srinagar was in the process of identifying and banning users who uploaded such videos. Mobile high-speed internet was blocked in the valley on April 17. Since 2012, the state has cut off the internet for citizens for an astounding 28 times. Social media, especially Facebook, is widely used by Kashmiri youth as a means of expressing dissent and presenting an alternate view to mainstream media depictions of their lives.

Kashmir is infamous as the largest militarized zone in the world. The rise of a separatist movement in Kashmir in the late 1980s resulted in Indian authorities heavily deploying military and paramilitary forces since the early 1990s. Those personnel are enabled further by laws like the Armed Forces (Jammu and Kashmir) Special Powers Act (1990) and the Jammu and Kashmir Public Safety Act (1978). The former empowers armed personnel to “fire upon or otherwise use force, even to the causing of death” in a case of perceived contravention of law and order. The Public Safety Act has provisions for arresting and jailing a person without trial for two years on suspicion that he or she may disrupt public order or act against the security of the state.

Between July and October 2016, over 7,000 Kashmiris, most of them young boys, were jailed under this law. Even minors as young as 13 were not spared. Rights groups documenting human rights abuses in the valley estimate that in the last 27 years over 70,000 have been killed, over 8,000 people have suffered forced disappearance and there are over 6,000 unknown, unmarked and mass graves.

Farooq is poor and cannot afford to pursue a case against the personnel of the Rashtriya Rifles. The outrage over the incident has ensured that the state police lodged a First Information Report against those responsible for the incident. At the same time, however, officials of the central government and the army have come out with various explanations to justify the actions. An army probe into the incident concluded that “the commanding officer took the decision reluctantly and as the last resort” when he realised that his unit had to pass an area where people had gathered to protest. Others like Attorney General Mukul Rohatgi have been more outspoken in extending their support to the battilion's actions:

The recent report about a stone pelter tied to an Army vehicle, it helped contain stone pelters and saved the poll officials. Why so much noise…Every day people are dying. It’s a surcharged atmosphere. The Army is dealing with terrorists, not with protestors, so they will have to be dealt with…everyone should look at the Army with pride, they are doing a great job…Sitting in AC rooms you can’t criticize army. Please put yourself in army position.

Currently, a more in-depth probe into the incident has been ordered by the Army’s Court of Inquiry, which has to reach a decision by May 15. It is important to note that according to the Section 7 of the Armed Forces (Jammu and Kashmir) Special Powers Act, army personnel guilty of human rights violations cannot be prosecuted in civil courts without permission from the central government. According to an Amnesty International report in 2015, the Ministry of Defense and Home Affairs refused to reveal the number of requests for prosecution of army personnel they had received, and so far no army personnel has been tried or convicted in civil courts of justice, even for cases of mass sexual assaults.

Given this history and the current political climate in the country, where criticizing the army’s actions is immediately seen as an “unpatriotic” act, it is hard to hold out hope for justice. Meanwhile, Farooq and his mother continue to live in insecurity. Farooq’s brother was allegedly killed by the army in the 1990s. The politicians, army and media will move onto the next big issue. But what will happen to this traumatized and humiliated young shawl weaver in a forgotten corner of Kashmir?

Video Volunteers’ community correspondents come from marginalized communities in India and produce videos on unreported stories. These stories are “news by those who live it.” They offer a hyperlocal context to coverage of global human rights and development challenges.