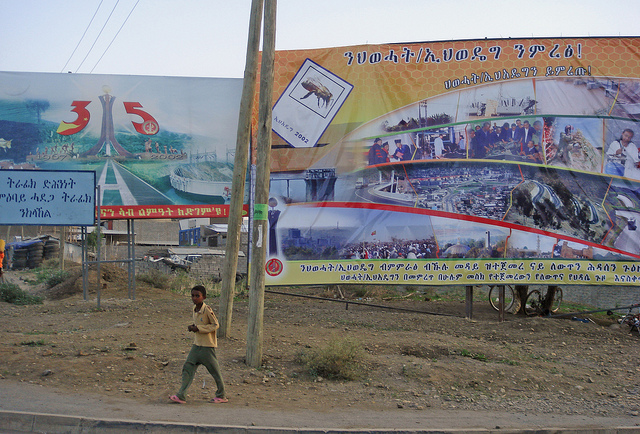 Campaign billboard for the EPRDF next to TPLF 35th anniversary billboard. EPRDF billboard says “electing EPRDF means ensuring the continuation of development and the renaissance of the country” TPLF billboard says “we will repeat our past victories”. Photo from 2010 by Uduak Amimo via BBC World Service. CC BY 2.0

Over the last six months, an ongoing protest movement in Ethiopia has triggered a power struggle within the country's longtime governing coalition, the Ethiopian People’s Revolutionary Democratic Front’s (EPRDF), posing an unprecedented challenge to its 27-year rule.

On December 30, it became apparent just how much the growing opposition has threatened the political status quo when EPRDF addressed [2] the country in a lengthy televised statement aimed at appeasing the three-year-old movement, which has braved deadly crackdowns to demand, among other things, fairer government representation of Ethiopia's ethnic groups

It came after the 36 members of the highest decision-making body of the EPRDF, the executive committee, convened in a heavily guarded secretive meeting that lasted a little over two weeks (from December 12 to 30, 2017 [2]).

But if hopes were high the mounting pressure would result in serious political reform, they were dashed with the statement, which offered nothing of the sort.

A coalition of power imbalances

The TPLF is the core of the EPRDF coalition, holding absolute power over the last quarter of a century.

For opposition activists, “Ethiopian People’s Revolutionary Democratic Front” is a misleading term because among the four parties it is the TPLF, not the other three parties, that determines whether to bestow power to other members of the coalition, or take it away.

The criticism goes that TPLF uses the coalition to confirm its own ability to keep both the center of the country and the regions under control while the remaining three ethnic parties participate as a “patronage network,” trading the needs of their people for political influence.

The most dominant member of the coalition, TPLF, is a mother party reminiscent of the Soviet Communist Party. TPLF created EPRDF, maintained it through a range of ideological machinations & used the vassals to bolster its legitimacy and squelch opposition from autonomous parties.

The power struggle has become plain in the last several months. In October, the speaker of Ethiopian rubber stamp parliament resigned [5] over of the claims of disrespect to Oromo people.

And tensions between OPDO and TPLF – which have simmered for some time – were laid bare when OPDO and later ANDM members of the Ethiopian parliament refused to perform their jobs unless the executive branch of the government offered them an explanation about the ongoing violence against protesters.

Some say when OPDO and ANDM members challenge the TPLF, they are driven by considerations of power, rather than ideology.

Nevertheless, it is worth noting that some sections of OPDO and ANDM have also emerged as advocates for political reform within EPRDF that comes on the heels of unprecedented popular protests in their respective regional states: Oromia and Amhara.

2017 was the year of the Oromo People's Democratic Organisation (OPDO). The OPDO was able to shake the puppet label and actually prove to be quite vocal in #Ethiopia [8]‘s political arena. pic.twitter.com/4648ug8bCi [13]

The political elites of the two parties have also started to forge an alliance, a significant development given that the elites from Oromo and the Amhara peoples have long been at opposite ends of the country’s political divide. Tsegaye Ararssa, a diaspora-based academic and opposition political commentator, wrote on his Facebook page [15]:

That nothing has unsettled TPLF in recent years more than the OPDO-ANDM alliance and the gestures of #Oromara [16] solidarity is confirmed in the EPRDF CC Press Release. This is a conclusive evidence that it is the content of this gesture of solidarity, its substance–given real flesh and blood–that will be the undoing of TPLF's hold on power. #Oromara #OromoRevolution [17]

For days, the outcome of EPRDF’s executive committee meeting was awaited in the hope that it would offer a crucial insight into TPLF's willingness to compromise in the face of the popular protests and mounting pressure from two members of the coalition, OPDO and ANDM.

However, the hopes that EPRDF’s executive committee meeting would lead to concrete reform within EPRDF appear premature.

In a statement read on state television and released on Facebook, EPRDF announced a new raft of political actions, including a vow to end corruption, rent seeking, and patronage politics.

It also expressed sorrow for deaths and displacement that have taken place since anti-government unrest began and thanked the Ethiopian defense and security forces for their service (even though they are largely blamed for the violence).

According to human rights groups, at least 1,500 people were killed over the last three years.

The statement also vowed, without specifics, to quash “unprincipled relations” implying the burgeoning alliance between OPDO and ANDM.

‘I don’t think there is a positive spin here’

Some believe that the statement, allegedly a joint expression from the four members of the coalition, fits neatly into TPLF’s political agenda.

Critics also cite that the delight of TPLF's social media following signal that that the party more than anyone still holds the power.

Mohammed Ademo, a diaspora-based journalist, summarized the statement in his view on Facebook [18]:

Here is a quick reax: Sorry but not sorry; Oromia will be militarized to stop all protests, road blockage and similar activities; Allegations of Tigrayan hegemony unfounded; Thank you to our security forces for wanton killings and for turning a blind eye as hundreds of Oromos were killed and hundreds of thousands of Oromos and Somalis displaced; There will be heightened social media crackdown; OBN and Amhara TV will fall back in line and return to their old platform as agitprops; The budding Oromo and Amhara alliance is a threat to continued Tigrayan dominance over the country and it must be squashed; EPRDF will return to its democratic centralism and revolutionary democracy roots.On the surface, this looks like an embarrassing setback for OPDO. I don’t think there is a positive spin here. TPLFites must be smiling

Even some who were sympathetic to OPDO and ANDM said they doubted that the two parties were ever ready to contend TPLF:

Did OPDO buckle under the weight of 18-days of TPLF cajoling, intimidation, and bluster? If so, the country is headed straight to the abyss. God help our suffering people who will be fixed to pay a heavy price to make TPLF/EPRDF the last dictorship to Rule Ethiopia.

As the country wrestles with its gravest crisis in a generation, the question remains: How will this ever-deepening political crisis end?