Ethiopia’s Parliament Speaker Resigns Over ‘Disrespect’ to Oromo People. Is the Balance of Power Shifting? 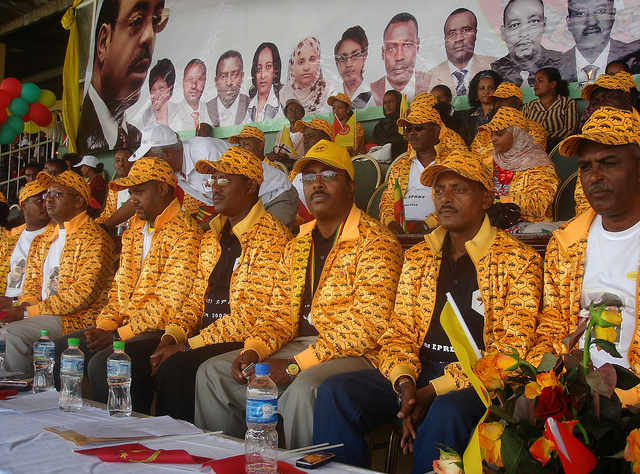 Recent events indicate that Ethiopia’s multi-ethnic governing coalition, the Ethiopian People’s Revolutionary Front (EPRDF), is at war with itself, and some fear the power struggle could destabilize the country.

Others, however, hope that it could signal the Oromo ethnic majority's growing influence in politics.

The issue came to light in October when Abadula Gemeda, the speaker of the Ethiopian parliament, said he would relinquish his gavel and resign from his position. Abadula followed up with an extensive interview with state-owned television, in which he said he lost interest in the speakership position because “my people and my party were disrespected” and he explained his plans to fight to “regain the respect the Oromo people deserve.”

These four parties purport to represent a particular ethnic group, but they share the same ideology, political association, and policy preferences. Of these, TPLF is the predominant party, billing itself as protector of the interest of the Tigryan people. ANDM and OPDO are perceived as willing accomplices of the TPLF, but they portray themselves as representatives of the Amhara and Oromo communities respectively. SEPDM is an amalgamation of political parties of numerous minority ethnic groups. It is usually considered as a dependent of dependents because it was formed  as subordinate to the other three.

The differences in power wielded by the different parties doesn't correspond to the size of the communities they represent. In terms of population size, the Oromos are the single largest ethnic group in Ethiopia. According to a census conducted in 2007, Oromos make up 34.4 percent of the country’s population, the Amharas account for about 27 percent and the Southern Ethiopian people account for 14 percent.

Though Tigrayans represent only 6.1 percent of the population, they dominate the most high-ranking military offices who control the nation's security and intelligence.

The marginalization of the Oromo people has in part fueled a large protest movement over the past three years. Daily anti-TPLF demonstrations take place in Oromia, the region of Ethiopia where the majority of Oromo people live, and there's talk that the rallies are covertly endorsed by the rank-and-file members of OPDO.

That's why some saw Abadula‘s resignation as highlighting the growing power of the OPDO, a party that has often been accused of dispensing the TPLF’s political agenda in Oromia. Prominent opposition leader Lencho Bati, who is based in the diaspora, commented on Facebook:

In my opinion, his resignation is like throwing a gasoline to the fire that is already out of control. It is a historical step that signals and symbolizes end of OPDO's submission to Tigreans dominance.

TPLF is good at recycling its use-and-throw officials. The “resignation” of Abadula from his ceremonial position in TPLF's rubber stamp parliament is not as significant as some would like us to think. It is to be remembered that the former prisoner of war, whose real name was Menase Wolde Giorgis, was once made a Major General. In 2005, he was made to vacate his position as Minister of Defense and was rebaptized Ato Abadula Gemeda, “President” of Oromia regional state. It is a folly to expect someone who leads a fake life–with fake name given to him by the TPLF, fake power and even fake degrees he bought for cheap to become a champion of the people he has betrayed throughout his adult life. The plain and simple truth is that Abadula is one of these political prostitutes owned and enslaved by the TPLF. This is a reality he has accepted for far too long. His resignation is not even a symptom of the crisis in TPLF's tyranny because the crisis is obvious without a puppet's resignation. We will wait and see what his masters will do with him again.

It does seem, however, that the absolute political dominance of TPLF of the past 25 years seems to be fading, and the ruling coalition is fragile.

The reported resignation of Abbadula, speaker of the house of PR in #Ethiopia, will be the beginning to uncover disagreement within EPRDF.

BefeQadu's tweet above turned out to be prophetic, as Bereket Simon, a founding member of an ANDM, stepped down from his position as an adviser to the prime minister less than a week after Abadula resigned.