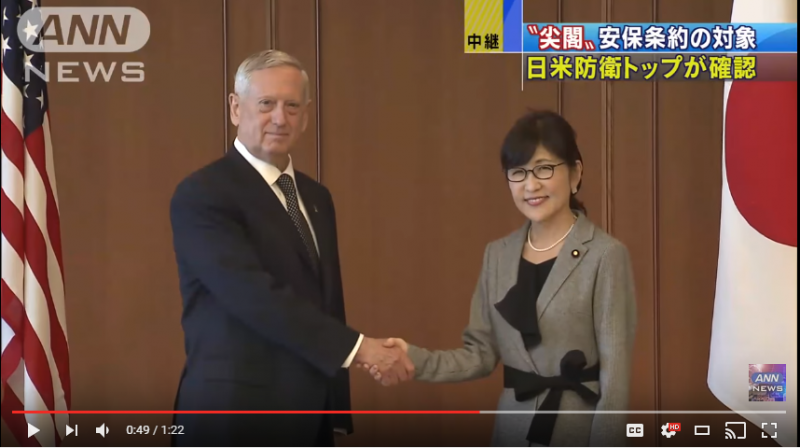 Following a week where US President Donald Trump managed to effortlessly alienate [2] some of the United States’ oldest allies and partners, new US Defense Secretary Jim “Mad Dog” Mattis the “warrior monk” made his first overseas trip since taking office, visiting Japan and South Korea.

Beyond an attempt to help smooth over differences between Japan and South Korea following a diplomatic row [3] in January over a statue, Mattis was attempting to reiterate an American commitment [4] to providing security and stability in the region. In Japan, at least, besides provoking outrage, Mattis also prompted admiration — especially when compared to an unhinged President Donald Trump.

At a time when Trump and a hard-nosed White House appear to be reassessing all of the United States’ existing alliances with potentially catastrophic consequences, Mattis’ remarks about the US-Japan alliance were welcomed by many observers in Japan.

Besides making typically formulaic diplomatic remarks about the good relations between the United States and Japan, Mattis also made bold comments [10] that removed lingering ambiguity about two key issues affecting the US-Japan relationship: whether or not Japan is paying its fair share for American bases in Japan, and whether or not the United States will support Japan's claim to the Senkaku Islands.

The uninhabited islands, rocky outcrops known as the Senkakus by Japan and the Diaoyu Islands by China, lie in the far western reaches of the Japanese archipelago. The islands are claimed by Japan, Taiwan and China [11]. A long-simmering conflict erupted in 2012 when the Japanese government nationalized the islands by buying them from a private Japanese citizen.

Ever since then the Japanese and Chinese coast guards have played a high stakes game of cat-and-mouse as protesters from Taiwan and mainland China attempt to come ashore and somehow claim the islands from Japan.

The potential for a military clash escalating out of control remains high, and there were doubts [12] in Japan about whether or not the previous administration under Barack Obama would back up Japan's claim to the islands, since America support for Japan might lead to all-out war with China.

In his remarks to the Japanese government, Defense Secretary Mattis was unequivocal about American support:

Mattis was, however, careful to stress that a diplomatic, rather than a military solution, would be best for dealing with the issue of the islands, as reported by NPR News Asia correspondent Elise Hu, who covered Matthis's meetings in Korea and Japan:

The Japanese government likely felt greatly reassured by the Mattis visit, especially after President Trump complained loudly of various allies, including Japan, “not paying their fair share” for shared defence commitments in his pre-election campaign.

There are approximately 55,000 US military personnel [19] stationed at 85 bases across Japan, whose presence theoretically guarantees the country's safety in a region troubled by growing militarization.

According to NPR's Hu:

“I believe Japan has been a model of cost-sharing, burden sharing.”

Still, at least one Japanese official — the governor of Okinawa Prefecture, Onaga Takeshi — was left unimpressed. The tiny prefecture bares most of the burden [22] of the US military presence in Japan, and Okinawa's governor complained that Mattis did not address any of the outstanding issues [23] related to bases that dominate his community.

Onaga also condemned Abe and Mattis’ stated agreement [24] to continue with plans to relocate a Marine base in Okinawa to an ecologically sensitive location:

Okinawa Governor Onaga Takeshi criticizes Abe/Mattis agreement [over base relocation within Okinawa] during visit as “an insult.”

For the moment, the new American Defense Secretary seems to have regular Japanese folk onside. A Japanese professional wrestling fan took to Twitter to laud Mattis’ nickname and reputation as a “warrior monk.”

Indeed, the Japanese media made much out of Mattis’ reputation [32] as a “warrior-monk”, using a literal translation of the term, tatakau shuudoshi (戦う修道士), or “fighting monk” in dozens of news stories [32].

One Twitter user considered the actual historical connotations of the term “warrior-monk” from a Japanese perspective.

The literal translation may be “warrior monk”, but in Japan wouldn't the proper word be “sohei”!? [Note: in Japan's medieval period, different religious denominations hired private armies of mercenaries to protect their land and their property; such mercenaries were dressed in monk's garb, and were called souhei (僧兵)] So, I guess you could say Defense Secretary Mattis is a hired American mercenary.