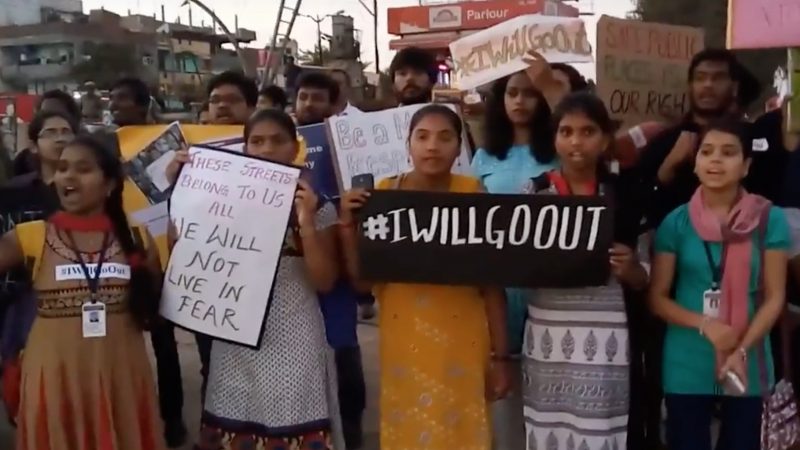 Thousands of women across India, from Delhi and Mumbai to Puducherry, rallied [2] this Saturday, carrying signs reading, “I will go out,” in a campaign to reclaim their right to access public spaces without fear of being attacked.

Activists rallied online using the hashtag #IWillGoOut, forming groups around the country, following the horrific mass molestation [3] case in Bangalore, which triggered a mainstream debate about the exclusion of women from public life.

Saturday's marches were coordinated to begin at 5 p.m. IST in more than 30 Indian cities, with organization work by various groups working to promote women's rights.

Ever since the New Year's Eve incident in Bangalore, the city has witnessed several forms of protest [8], including human chains, online campaigns, and gatherings in parks.

#IWillGoOut is a nationwide gathering on 21st January in solidarity against sexual harassment and misogyny, and to reclaim women's rights to safe public spaces. We're a collective of individuals and organisations across various cities in India.

Saturday's demonstrations coincided with the global women's march [10] centered in Washington D.C. against the misogyny, bigotry, and hatred critics attribute to Donald Trump, who became America's 45th president on Friday.

Similar protests broke out in European capitals, as thousands of women took to streets to join sister marches in Asia and the United States, protesting against Trump's inauguration. According to reports [11], marches took place in Berlin, Paris, Rome, Vienna, Geneva, and Amsterdam.

A demonstration also took place in Nairobi, Kenya, with an additional message [12] to the government:

Here in Kenya we will march to demand reproductive rights, women's land and inheritance rights, and the implementation of the 2/3 rule. We will march to end sexual harassment and assault, female genital mutilation, and the trafficking of women and children; and to end discrimination against LGBTQ people, sex workers, disabled women, HIV positive women, refugee women, women in the informal sector and other marginalized groups.

The protests in India attracted thousands of women across the country, and participants flooded social media with photos and video footage from the events:

Every woman says now that even the day and the night belongs to us. #IWillGoOut

No one should hide because of fear:

#IWillGoOut [4] ‘because I am fed up of hiding behind doors to avoid being groped.’ #ChennaiSpeaks [34] #WomensMarch [18] pic.twitter.com/Lf5fTwfgyl [35]

Around the country, folks are ready to go out. Are you? #IWillGoOut [4] pic.twitter.com/URtWbUnyCF [44]

Here is Kaavya Pillai, a journalist and a feminist, explaining the importance of these protests:

We can't live our lives fearing spaces. The only way is to own them and reclaim the night. #IWillGoOut [4] @TheRedElephnt [46] @FeminismInIndia [30]

Bengaluru is getting ready to say #IWillGoOut [4] Join us at City Railway Station Auto Stand at 4.30pm today and march with us for womens safety pic.twitter.com/Z8MZ71vTZD [50]

Shikha Sreenivas wrote in The Ladies Finger [55] about why the conversation is so important:

Systems of oppression and control work differently in various cultures, they reinvent themselves with the times to find new ways to control women, their bodies, and their movement. But these women are full of hope and energy to fight a mindset that seems undefeatable. The movement is a powerful reminder of sisterhood sans borders. These women reminded me what I had forgotten in my despair — that the streets of this country are ours too.

The movement questions the traditional notion of public spaces as the domain of men. It challenges the patriarchal culture that raises questions on a woman’s presence outside her home and blames her attitude and clothes for any act of violence or harassment.

The rally in India was triggered by the appalling incident of mass molestation [58] on New Year’s Eve in the city of Bangalore. This march is aptly called ‘#IWillGoOut [59]’. The ‘I’ in the title asserts a woman’s agency to decide her own actions, behaviour, clothes or timings. The ‘Will’ describes a wilful act of protest in the face of harassment that women experience when they claim their agency. The ‘GoOut’, seemingly straight-forward, stands for multiple things – go out to protest, go out to work, go out to party, go out to question the illegal state actions [60], go out to contest elections [61] or simply to stare at the sky and loiter in the streets [62] because it is ‘I’ who has the agency to decide what I want to go out for.