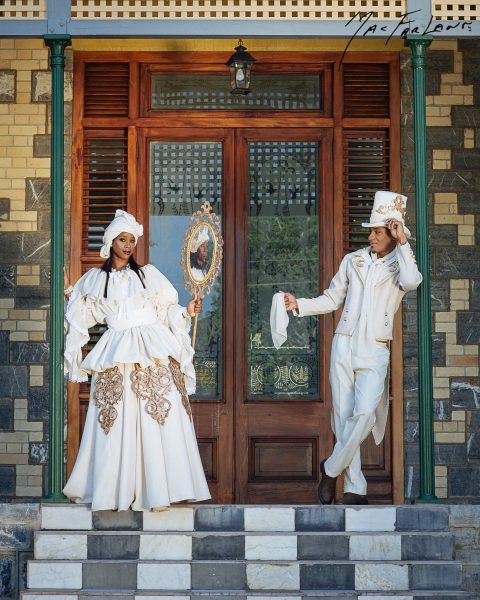 Trinidad and Tobago carnival designer Brian Mac Farlane, the man behind the controversial carnival band [2] “Cazabon—The Art of Living”, has issued an apology regarding his 2017 presentation, which some people believe shows a lack of sensitivity to the country's turbulent colonial history.

Mac Farlane also announced he would remove the portrayals to which people took the most offense — “La Belle Dame and Garçon de la Maison” (“The Beautiful Lady and the House Boy”).

Prior to his statement on October 25, Mac Farlane hosted a Facebook Live event [3] in which he was joined by representatives of Citizens for Conservation [4], The National Trust [5] and The Art Society of Trinidad and Tobago [6].

In the nearly hour-long video, Mac Farlane characterised the mid-1800s to early 1900s—the years in which renowned Trinidadian painter Michel-Jean Cazabon came into his own—as “a wonderful, beautiful era for our country”, when art and fashion were vibrant, and architecture was “in its perfect glory”.

In a statement [7] issued later, Mac Farlane said that by invoking Cazabon in the title of his work, he wished to “help protect and preserve our heritage spaces the best way I knew how – through art, by interpreting the story of that time.”

“While I want to always ensure that I accurately reflect our incredibly multidimensional history,” he continued. “I understand that there is still a lot for me to explore, to unearth, to unlearn and to learn. My intention was never to offend anyone, or to come across as ignorant of our truth, or to idealise insensitivity. It was to depict the clothing of the time. However, I understand how and why it hurt some of us. And it is with this realization that I have made the decision to not move forward with this particular section from the 2017 presentation. I am deeply, deeply sorry for the pain that I have caused.”

Mac Farlane said he welcomed “the healthy debate, because it can lead to a deeper understanding of our growth as a connected people,” and asserted that he had “learned a lot from this experience”. His hope, he said, was that “these conversations build us up to listen to each other, journey with our fellow citizen, act as messengers of change and educate future generations as to the richness and diverse nature of our identity and heritage.”

But both Mac Farlane's apology and his decision to remove the “La Belle Dame and Garçon de la Maison” portrayals were met with mixed reactions.

Gary Jordan, the photographer who shot the images of the costumes, was satisfied with [8] Mac Farlane's statement:

You sir are magnanimous in your response to a situation that if depicted in a movie or other medium, would have been praised for efforts showcasing our history. A complicated, skewed and cosmopolitan history, but it is who we are none the less. I salute you sir for standing up and dealing with the matter head on, even though I believe if we begin to sensor artists for the sake of the masses we are indeed going down the wrong path. Love and understanding is and will always be the only answer.

Other Facebook users felt [9] that Mac Farlane should not have caved into the pressure and pulled the costume designs at all.

In the comments thread of a public post by activist and carnival enthusiast Tillah Willah, one Facebook user suggested that Mac Farlane needed to “go back to the drawing board” [12], while another wondered [13] whether pulling the section was enough.

Another commenter, however, remarked [14]:

Wow. He withdrew the portrayal with such grace and this is the response of you all? Be careful that fighting for the cause becomes more about the fight. Then we all lose.

Tillah Willah disagreed, calling out [15] “the lack of historical awareness that prompted this whole debacle in the first place”:

In another status update, she explained [16]:

Our history is complicated and troubling and painful and horrendous. Our history is red blood fertilising black soil. Our history is beauty out of ugliness.
Asking that those complications be acknowledged is not censorship. It is a cry against the continued erasure, not just of African contributions to this society but also to the largely ignored and denied Indigenous presence.
Stop whitewashing our history.
It is wrong
It is inaccurate
It is disrespectful

Commenting [17] on the controversy in the press, Cazabon's descendants expressed concern that the negative reception of Mac Farlane's interpretation of the artist's themes could have an adverse effect on Cazabon's reputation. They said Mac Farlane should have consulted with family members beforehand.

Kevin Browne, a Trinidadian academic teaching in the United States, also read [18] Mac Farlane's presentation as a “performance” of “erasure.” According to Browne, “It's not that they don't know that their lives depend on those they oppress. They just prefer not to see…”:

This ‘unseeing’ is a performance that we, the unseen, find both baffling and familiar. So much so that while we may justifiably rail and agitate for recognition, we often find the performances so convincing that we struggle to see ourselves.

Colonialism is real.
Empire is real.
Trauma is real.
Racism is real–even here, where so many still deny it.
The joy and beauty and pleasure are real, as well. We dare not forget that–it keeps us alive.
But the struggle? The struggle is real.
And if ‘past is prologue’, we should not only find the portrayal of suffering unsurprising in these times–in Mas or in politics. More importantly and more usefully, we should be just as inclined to recall and enact the different forms of resistance to the cause of that suffering.