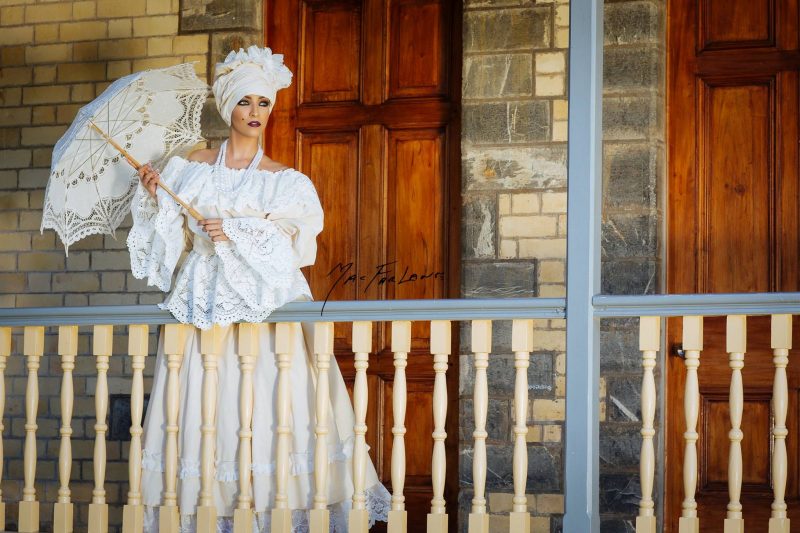 “La Belle Dame”, one of the costumes in the 2017 Carnival band “Cazabon — The Art of Living”. Photo by Gary Jordan Photography, used with permission.

In Trinidad and Tobago, it's the time of year that masquerade designers unveil their creations for Carnival — the annual two-day street festival that attracts revellers from all over the world.

The roll-out has gone smoothly thus far, with leaders and designers of carnival bands (as the often thousands-strong troupes of masqueraders who parade in the streets are called) posting images of their 2017 offerings online, and Carnival enthusiasts debating their choices of bands and costumes.

Except in the case of one band: after its October 21 launch, Brian Mac Farlane's 2017 presentation, “Cazabon — The Art of Living”, provoked a social media firestorm over what some felt was the glamourisation and belittling of both the country and the region's collective history.

The online discussion was initially about the first impression of the costumes — all-white, seemingly a blend of masquerade and couture — with some Facebook users admiring the designs, and others suggesting that Mac Farlane was imitating veteran mas’ (short for masquerade) designer Peter Minshall, and edgy newcomers K2K Alliance and Partners, who have seamlessly integrated high fashion into their Carnival portrayals.

The band's concept refers to Michel-Jean Cazabon, a mixed-race, 19th-century Trinidadian painter who is widely held up as the country's first internationally recognised artist. His work depicts life in Trinidad during the mid-1800s — mostly the family life and social pursuits of the planter class, as well as stunning watercolour landscapes that are important historical markers for what the island looked like during that era.

“Culturally appropriating our own culture”

But upon closer examination, people began to realise why they were having such a strong reaction to Mac Farlane's costumes. In a public post, Facebook user Carla Steffanie explained:

I figured out why I'm not crazy about the Mac Farlane Carnival costumes. He's glamorizing a part of our colonial history where racism and socioeconomic disparity were rampant. And carnival now, with its overpriced parties and parades, continues that tradition. The costumes are pretty, but they don't say much. They don't tell a story, or at least one that is superficial. They're there for show. I suppose that's what carnival is all about any way. But basically, with this collection, what I'm seeing is one of the country's supposedly premier carnival artists is culturally appropriating our own culture. We've come full circle.
Or I could be reading too much into it. Jump up and wave, my people.

Two images in particular sparked outrage — the poses of the models were exacerbated by the fact that the costumes were named “La Belle Dame and Garçon de la Maison” (French for “The Beautiful Lady and the House Boy”). University lecturer and political commentator Rhoda Bharath quoted her Facebook friend Dave Cave, who called Mac Farlane's portrayal “the trivialisation of trauma”.

Bharath was incensed. She questioned the Cazabon reference, noting that “the era that Cazabon came into his own is post 1834″, which was the year of emancipation — albeit with conditions — for all slaves in British colonies, including Trinidad and Tobago:

So my questions are thusly:
1. Why the slave narrative in the designs?
2. Why the valorisation of the slave narrative and the nostalgia for an era that abuse, oppressed and disenfranchised African people?
3. Does MakakFarlane [a spoof on the designer's name, Mac Farlane] and his creative collaborators even acknowledge that African descended people contributed heavily to the Mas and the valorisation of enslavement and the colonial era is a backward move?
4. People sat down in a room and thought the concept and the costumes in this the year of our Lord 2016 is a good idea?
5. Did Colfire and Tobago Plantations sponsor this band?
6. Is stirring up a historical controversy the only way Brian can sell costumes now?
7. Is Cazabon: A Way of Living a furniture line at Courts or American Stores?
#MakakFarlane
#MissMeWithTheBullshit

The three official hashtags attached to the band — #KnowYourPlace, #KnowYourPeople, #KnowYourPath — didn't help matters. Although the narrative surrounding some of the hashtags — at least from the perspective of the designers — had to do with “celebration [of] our potential”, “reverence in our spaces” and re-establishing our connections, most social media users did not take well to being told that they should know their place.

As Facebook user Jacqueline Morris explained, it was all about context. She added:

One image, one title, one hashtag. Together, that means something. And it means something bad to a lot of people. We all see these things through our lens of experience. There is NO context of a Carnival presentation that can make these people, descendants of slaves, feel good about that combination shown in that photo.
We not confused. We vex no ass.

I'm puzzled as to why people are choosing to interpret this as someone telling them to know their rank in society and not to rise above their station, as compared to Know your Trinidad and Tobago, and the heritage and history of your buildings and culture. But to each their own. I guess at the end of the day, that is what art is for.

“A people who have never come to grips with our history”

My personal thoughts on the Mac Mas controversy is that we are a people who simply have never come to grips with our history and have only made the barest attempts at posturing ourselves in creating a veneer of pseudo-comprehension. I see in this production, not a white man denigrating non-whites, but a tribute to the fashion and cultural history as depicted by Cazabon. […]

The costumes which seem to spark the greatest controversy show a muscular black man who is apparently the personal slave of a white woman in a flounce of skirts. Interracial relationships abounded in out 19th century society and were not just a facet of slavery.

Here is a golden opportunity to diversify the artistic horizons of mas but instead we griping about white vs black. It shows how truly we are the children of slaves and fit so well into the model of the plantation society […] Get over the chip and enjoy the show people.

But some people simply could not bring themselves to stomach the spectacle. Musician and actor Nickolai Salcedo wondered if the band would have thought it in good taste to portray the holocaust — and if not, why then was slavery fair game?

“Throwing money” behind the band?

Adding another dimension to the controversy was a status update by spoken word artist and activist Muhammad Muwakil, in which he tagged several high-profile organisations, some of which use public funds, and suggested that they “were throwing money” behind the concept for the band.

However, Global Voices spoke with Rudylynn Roberts, president of Citizens for Conservation, who confirmed that neither CFC nor The National Trust of Trinidad and Tobago contributed any money to the band. Roberts said:

What we did is support the celebration of our architectural heritage and the artisans who built these buildings. The art of the handmade fretwork, the tooling of the stones that we quarried ourselves, the dedication of the people who toted the river sand for the lime mortar mixes. These are OUR buildings because we built them. OUR craftsmanship, our design influences from ancestral lands. We welcomed the focus on this positive aspect of our built heritage through a different medium. CFC's lobby is preservation of tangible heritage, which includes architecture…and we are always at
pains to point out the contributions of the artists, artisans and labourers, without whom these buildings would not exist. 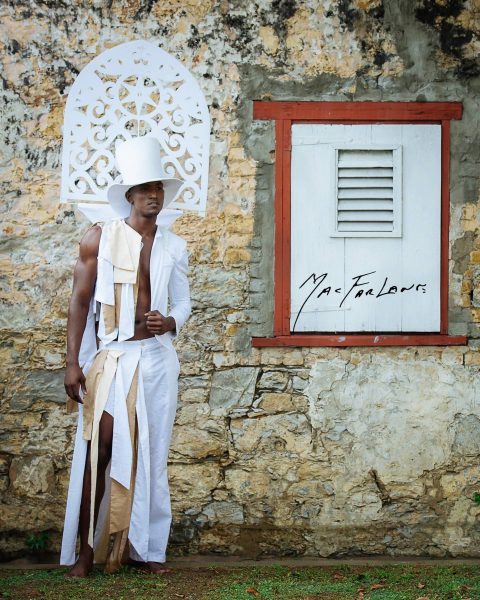 A costume entitled “Citizens For Conservation” in the “Cazabon” Carnival band. The costume's collar references the handmade fretwork of the time. Photo by Gary Jordan Photography, used with permission.

Naturally, it wasn't long before the memes started. Rhoda Bharath posted an image of shackles, captioning it #Makakfarlane 2017 Monday wear, and a new slant on the house boy image began to make the social media rounds: 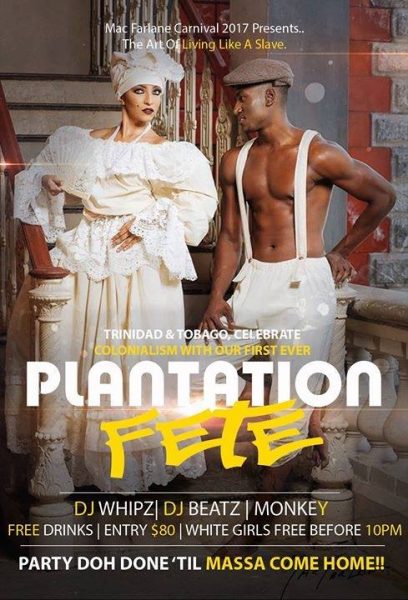 Meme of the Mac Farlane costumes that is being widely shared on Facebook. 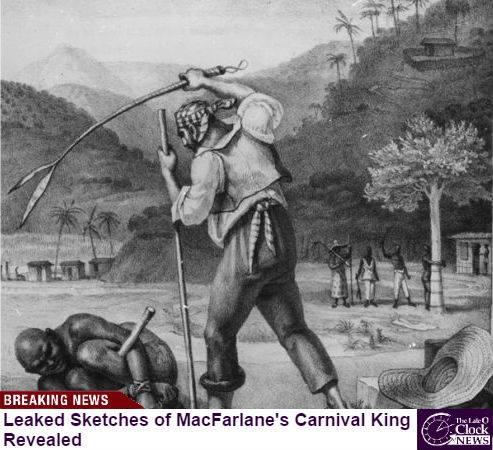 Mac Farlane, meanwhile, explained the concept of his band as choosing to “strip away frivolity and embrace our valiant, poetic history”. Calling it “a creative call to act” he said that “as a nation we must fight back against neglect, by celebrating our beautifully diverse culture and awakening the spirit of promise across the islands”.

Perhaps in response to the outcry, Mac Farlane has announced that he will be hosting a Facebook Live chat entitled “Heritage Talks: A Panel Discussion”, today at noon — not quite the public discussion that activists had hoped to have with the designer, but it might be a start. The session is expected to attract a large online audience.

And while there were some who wondered whether there would be such hue and cry had the band been presented by a person of colour (Mac Farlane is a white Trinidadian), Muhammad Muwakil made the point that “this cannot be another thing we simply concede to.”

Or, in the words of Mark Lyndersay, who played on the popular phrase “you can't play mas’ and ‘fraid powder”: