A timeline of Venezuela's political deadlock 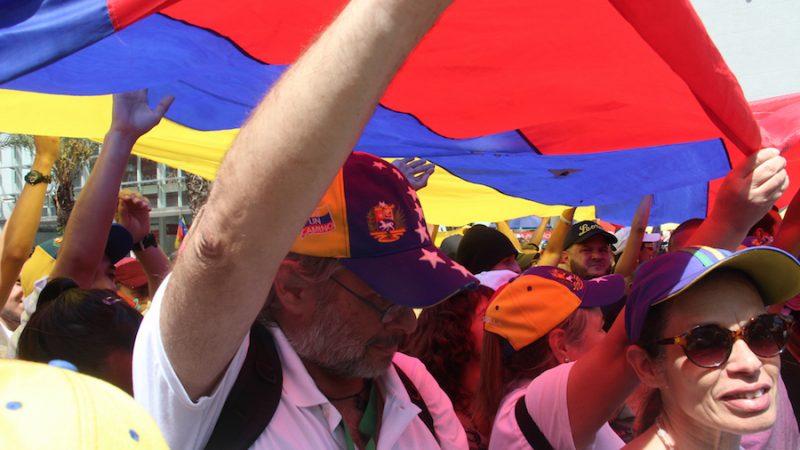 Venezuelans march in a rally on February 2, 2019. Photo: Provea, used with permission.

It has been a long time since the Bolivarian Republic of Venezuela has known political stability. From the 2013 death of Hugo Chávez, to the 2017 political de-fanging of legislative powers, to Juan Guaidó's open challenge to President Nicolás Maduro's legitimacy in January 2019, Venezuelans have endured what feels like a never-ending cycle of uncertainty and political turmoil. Along the way, trade relations have crumbled and inflation rates have soared.

Global Voices’ contributors have reported on many elements of Venezuela's political conflict, from food and medicine shortages that have pushed over three million people outside the country to the authorities’ deteriorating respect for human rights, particularly freedom of expression.

Here is our timeline of events since 2017. This page is subject to frequent updates. 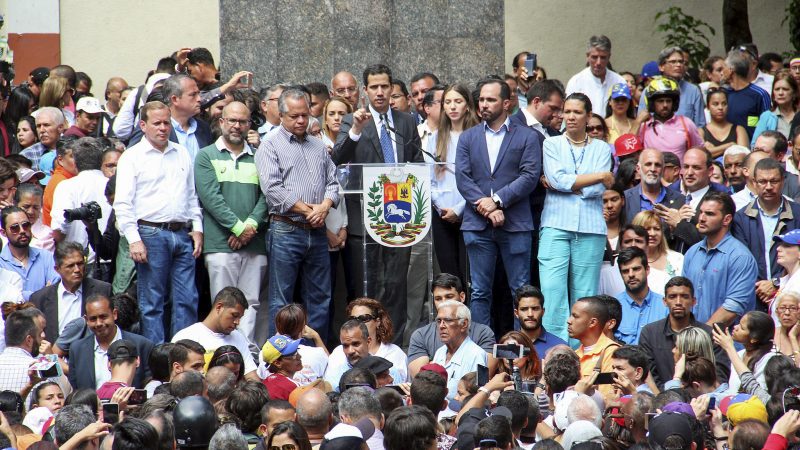 Nicolás Maduro was inaugurated for his second term as president on January 10 after winning an election that was widely considered to have been fraudulent.

Just days later, the recently-elected president of the opposition-controlled National Assembly, Juan Guaidó, invoked the 1999 Constitution, mainly Article 233, to declare he was entitled to take presidential powers and call for new elections.

On January 23, surrounded by a crowd of protesters in Chacao, east of Caracas, Guaidó announced he was ready to take the role of interim president of the Bolivarian Republic of Venezuela.

Article 233 stipulates what is to be done if the president dies, resigns, is ousted following a ruling by the Supreme Court, is deemed physically or mentally incapacitated by a medical body approved by the Supreme Court and the National Assembly, or abandons the post. It states that it is the President of the National Assembly that should take office provisionally if the post is abandoned.

According to Guaidó’s interpretation of the law, Maduro's election and inauguration were illegitimate, and he had thus “abandoned” the post. By this logic, since January 10, Maduro has been “usurping” the presidential seat.

‘Nobody knows what will come next': Venezuelans rally in strongest challenge to Maduro yet

May 2018: The presidential elections 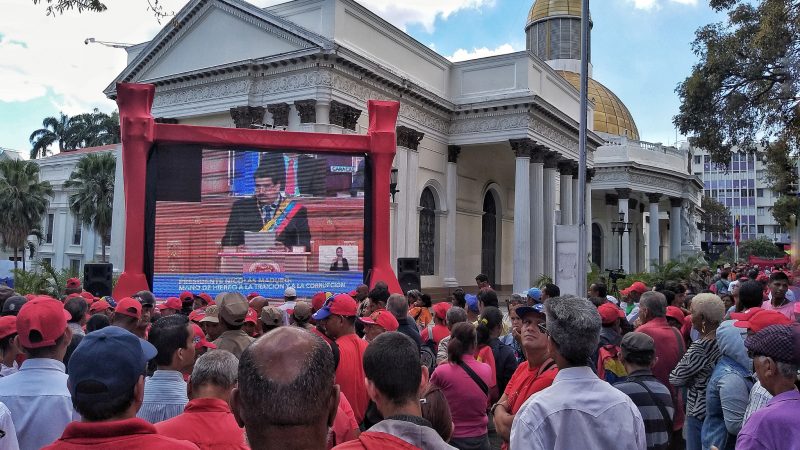 Supporters of Nicolás Maduro watch as he announces the ‘Plan de la Pátria‘ (homeland plan) in front of the Federal Legislative Palace, the seat of the Constituent Assembly in Caracas, January 14, 2019. Photo: Provea, used with permission.

Venezuela held presidential elections in May 2018 despite reproaches by regional governments and multilateral bodies such as the OAS and the European Parliament.

While elections are traditionally convened by the National Assembly, this time they were called by the chavista-dominated Constituent Assembly, a body created by the executive in 2017 that then absorbed legislative powers. The polling day was also abruptly moved forward on the calendar, from their usual December date to May.

The opposition, whose main figureheads were either in jail or disqualified by the National Electoral Council, decided to boycott the elections.

Venezuelans who hope for government change face dilemma — to vote or not to vote?

Who will be next? Venezuela’s political crisis sees a new wave of censorship, media repression

July 2017: Establishment of the Constituent Assembly 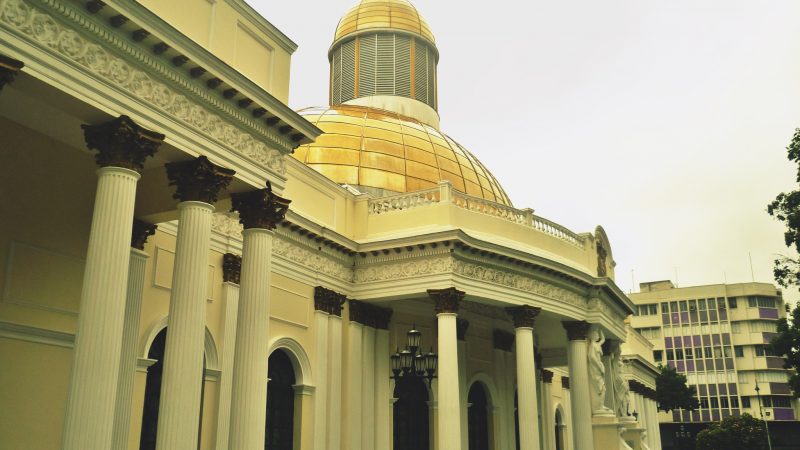 Following a month of protests, President Maduro called for the Constituent Assembly, to replace the country's current constitution, approved in 1999 under Hugo Chávez’ first term.

Representatives and activists from the opposition saw the move as an attempt by the Maduro government to sideline the National Assembly, the country's traditional legislative house.

The opposition has decided to boycott the election. As a result, the Constituent Assembly ended up with a strong majority of government supporters.

Is This the End of the Fifth Republic in Venezuela?

Chronicles of a Concerned Venezuelan: Scenes to Help You (Try to) Understand Venezuela

Venezuela's Conflict Moves From the Streets to the Screen

Inspired by Ukraine, Venezuelan Protesters Create Shields With Their Own Symbols

The Venezuelan People's Vote of Rebellion

‘Arepa, the Taco Is With You’ — The Hashtag of Solidarity From Mexico to Venezuela 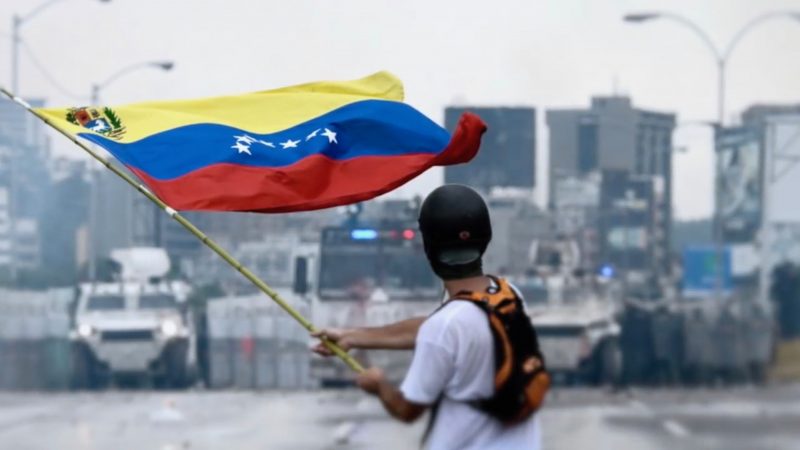 The effective dissolution of the National Assembly sparked protests that lasted for months and led to many violent confrontations between civilians and security forces.

More than 160 people died in the demonstrations and hundreds were arrested. According to human rights organizations, many suffered serious abuses in the hands of security forces, such as “ torture—including severe beatings, electric shocks, asphyxiation, and sexual abuse.”

The Supreme Court eventually reversed its ruling that had stripped the National Assembly of its legislative powers.

As Protests Escalate, Web TV and News Sites Are Censored in Venezuela

“Bodies Die, Countries Don't”: What the Venezuela Crisis Takes Away From Us

For Venezuela's Government, Protesting Is “Terrorism”

March 2017: The National Assembly powers are transferred to the Supreme Court 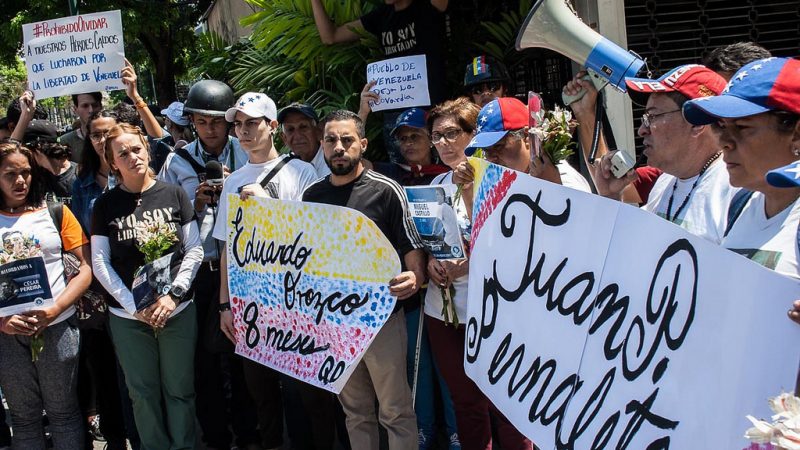 Demonstration in memory of the protesters that were killed during the riots of 2017. Photo: Provea. Shared with Public Domain Mark 1.0

The Supreme Court of Justice of Venezuela ruled that the National Assembly, the country’s unicameral legislative body, was “in a situation of contempt” after finding the elections of three of its members to be marred with irregularities.

When Venezuela held legislative elections in December 2015, opposition parties had won a majority of seats, for the first time since Hugo Chávez was elected in 1999. The opposition coalition, the Mesa de la Unidad Democrática (MUD), spent most of 2016 pushing for a recall referendum of Maduro's mandate. The government eventually blocked the referendum.

The 2017 Supreme Court ruling came after a majority of the house vetoed a move by Petróleos de Venezuela (PDVSA), the national oil firm, to establish joint ventures with private companies. At that time PDVSA was seeking to cooperate with companies from China and Russia.

The Supreme Court's ruling stated that while lawmakers were “in contempt”, the court would take over the ability to legislate, essentially nullifying the powers of the National Assembly.

For Many Venezuelans, ‘Self-Inflicted Coup’ Spells the End of Their Country's Democracy